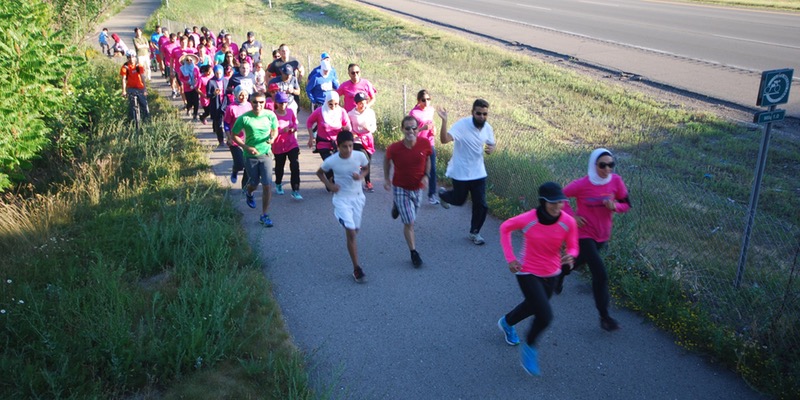 Ramadan is in many ways the world’s oldest detox. At the center of this concept during the month-long season observed by over a billion people is the practice of fasting from sunrise to sunset. It’s a time for appreciation for the gift of nourishment, both in body and spirit.

It’s also a time that many take to help those who have to do without sometimes.

With all this in mind, a growing number of Muslim Americans are adding other components into the mix. Among the growing number of Ramadan-season traditions is the Fasting 5K running event that takes place in several cities across the United States and Canada. The idea behind it, is combining the physical and spiritual through the ritual of hitting the pavement and letting the endorphins take over the psyche.

Come this Saturday (June 10), dozens of Metro Detroiters are expected to run and walk, all to raise money for charity, starting at 7:30 p.m. at Muslim Community of Western Suburbs (MCWS) at 40440 Palmer Rd. in Canton. This year, funds collected locally will be given to Emgage Michigan, a nonprofit that empowers Muslim Americans through educational events, voter initiatives and leadership development. The Fasting 5K’s 11 participating cities will support the World Association of Girl Guides and Girl Scouts’ Voices against Violence program, designed to improve young people’s knowledge and awareness about violence against women. Registration is still open for folks wanting to join in last-minute by clicking here.

If the thought of jogging in the hours just before Iftar is intimidating, there are other ways to give back. ICNA Relief Muslim Family Services has organized several efforts for the month, including the “Sponsor a Family” project is under way to provide the necessary ingredients for healthy Iftar and Suhoor meals. Sponsors can contribute as much as $600 for a family of six or as little as $130 to help out an individual. The community service organization is also asking for donations of new toys, bicycles, fans and new or gently used clothing. More information can be found here.

We know there are tons of other charitable events taking place throughout Metro Detroit during Ramadan. Hit up Tostada Magazine if you would like help getting the word out at tostadamag@gmail.com