Opinions about who makes the best pizza abound. Around Southeast Michigan, Detroit square purists will insist that the Sicilian-style pies — born in a kitchen on Conant in blue steel rectangular-shaped pans, with toppings placed directly on the dough, ample layers of cheese, followed by more toppings and finally sauce — are the only way to go.

But as we’ve seen with the Bengali-style hybrids found at Amar in Banglatown, the sensational thin slices that fly out the door at Supino and the whimsical concoctions created by local musical talents at El Club, there’s plenty of room for worthy contenders.

But in Naples, the birthplace of the pizza as the world knows it, there are no bending of the rules. The origins of the Neapolitan pizza date back centuries when peasants began topping their flatbread with tomatoes in the late 18th century. Soon, this economical snack began attracting foodies from all over Europe, grateful for the Napolis’ doughy, crusty, tomatoey gift to the world.

And in Michigan, PizzaPlex — which opened just after Labor Day on Vernor Highway in Southwest Detroit — is one of only two spots in the state where you can find real Neapolitan pizza.

A true Neapolitan pizza must meet exacting standards, according to the Associazione Vera Pizza Napoletana, the international governing body that grants official designation. The crust must consist of dough made with several components, no compromises: refined Italian type 0 or 00 wheat flour, Neapolitan or fresh brewer’s yeast, water and fine sea salt. The dough must be kneaded by hand or with a low-speed mixer and it must be shaped by hand, no rolling pin allowed. Only raw, pureed San Marzano tomatoes from Italy can be used to top the dough, followed by mozzarella cheese made from cow’s milk, or mozzarella di Bufala — mozzarella made from water buffalo milk. Toppings are simple, only fresh basil and extra-virgin olive oil — pepperoni or anchovies are for another pie. Even the type of oven is specific, it must be wood-fired.

Only two variety of pizzas — the margherita and marinara — can be considered Vera Pizza Napoletana-certified.

If, and only if, all criteria have been met, can an establishment apply for that designation. Applicants fill out a pages-long form and submit it to Vera Pizza Napoletana. PizzaPlex co-owner Alessandra Carreon and husband/partner Drew McUsic did just that when they opened their doors and were granted official Neapolitan pizza status within a few months of applying, making the eatery the only place in the city of Detroit with the special recognition. 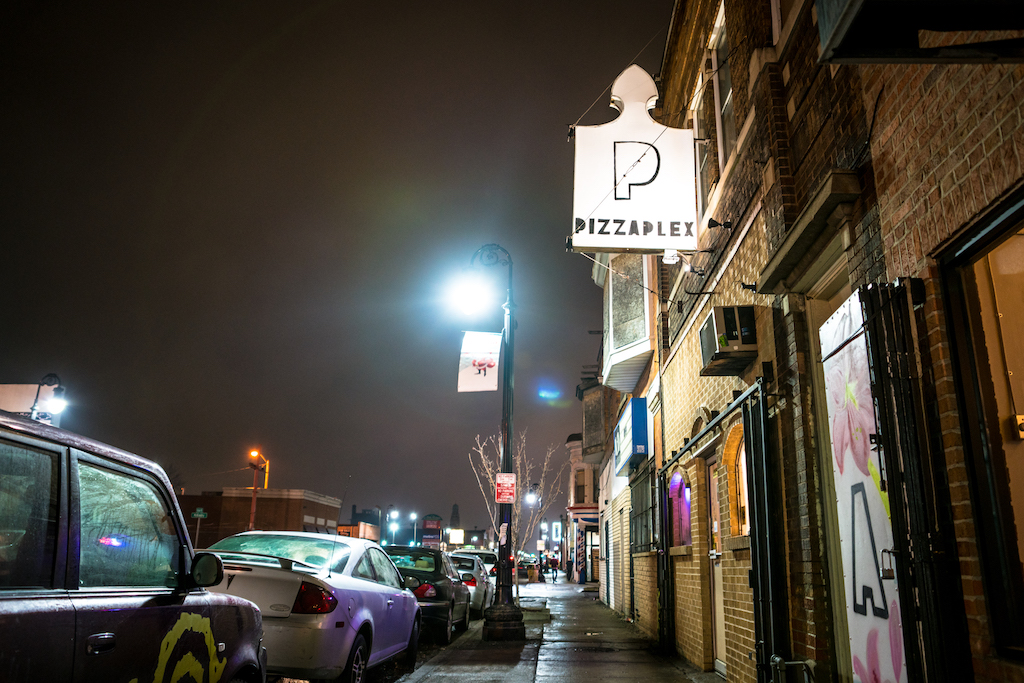 Carreon, who is half Italian and half Filipina-American, grew up in a Neapolitan pizza household. In fact, she tells Tostada that she spent part of her upbringing in Naples, where her extended family ran a pizzeria.

So, basically pizza ran in her family. That didn’t mean she set out to run a pizzeria though. An engineer with Ford by day, she and McUsic only began thinking about pizza-making as anything other than a fun activity after their honeymoon spent in Naples. That’s where they met Fabio Cristiano, a noted pizza-maker and instructor at the Scuola di Pizzaiolos.

And that’s when the idea for PizzaPlex was born.

A friend with a connection to a property on West Vernor Highway — on the same block as the newly revamped Flowers of Vietnam — nudged the couple to secure the location. A $25,000 grant from Motor City Match helped with the build-out. And further guidance from Cristiano assisted with the food side of things. 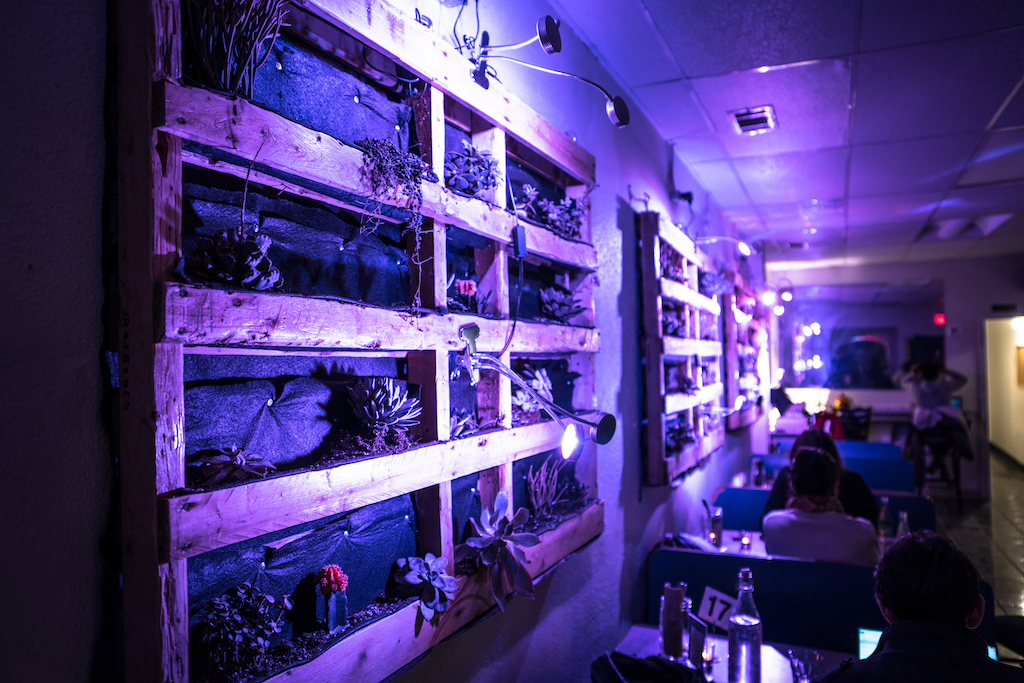 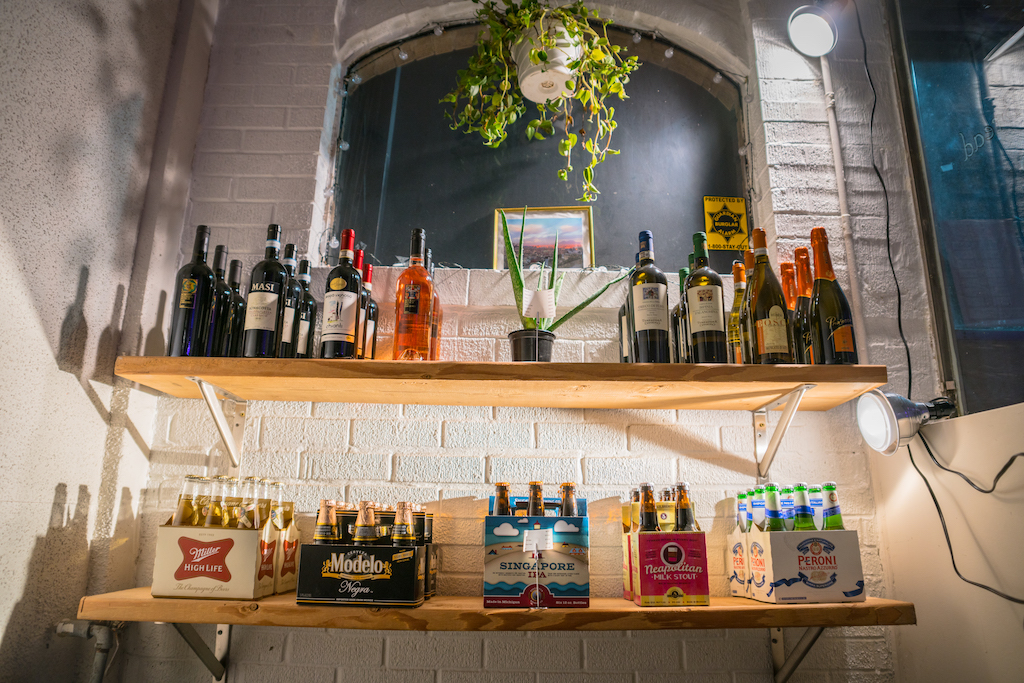 The dining area features some bar seating, plus a line of blue booths, accentuated by purple grow lights that shine on DIY pallet living walls of basil (serving as both functional fresh ingredient supply and chill vibe). In a separate room, guests can book meeting or party space, making use of a large projector screen. Local artists Freddy Diaz and Eduardo Gonzalez also provide a traditional mural to set the tone. 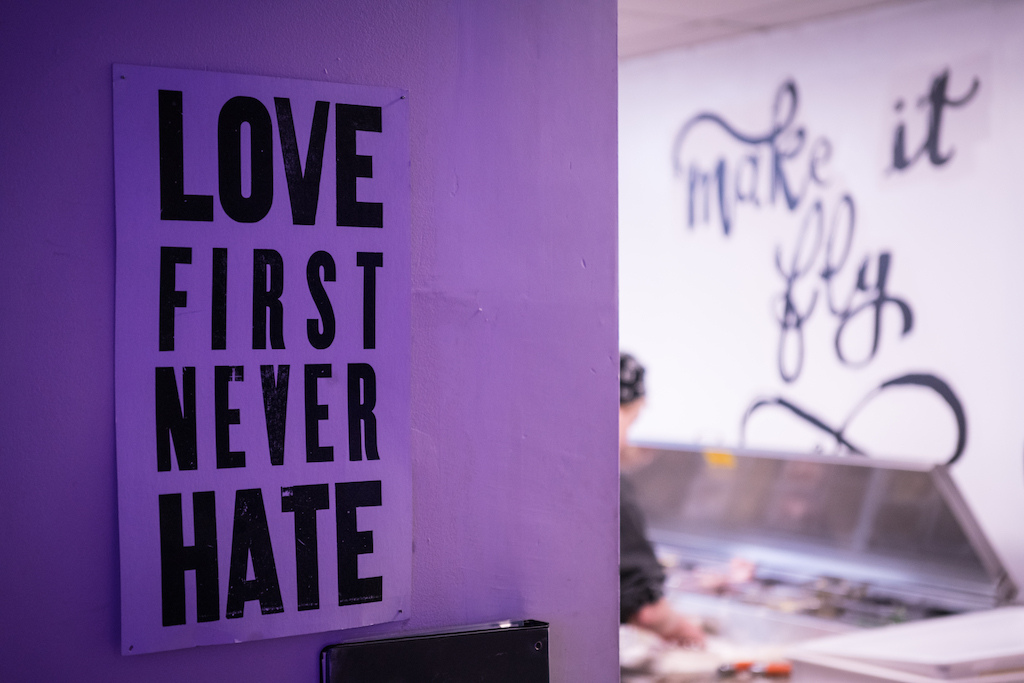 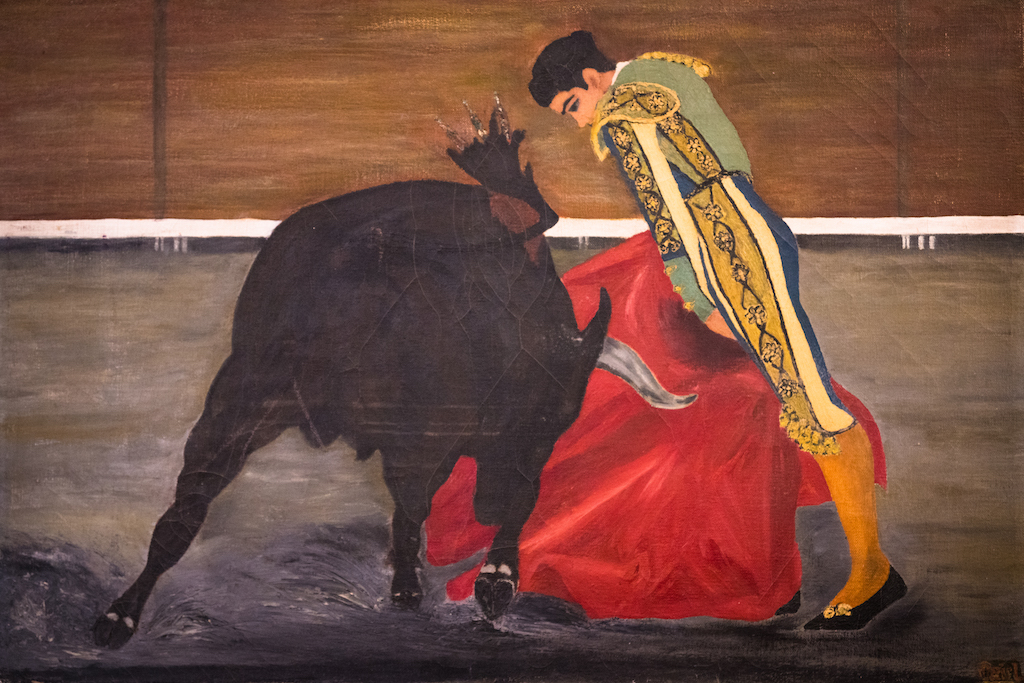 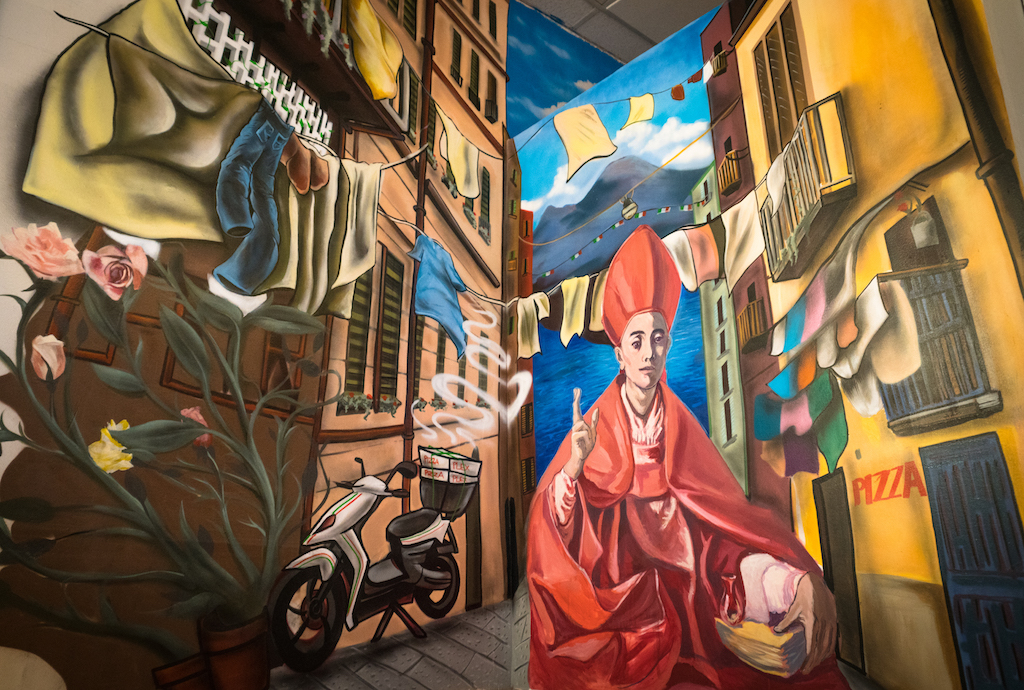 As for the menu, on top of the basic Margherita ($8) and marinara ($5), are a variety of 18 other speciality pies — all ranging between $10 to $13 and several marked as vegetarian-friendly — a relative bargain considering the quality.

So far, we’ve tried four different styles, leaning more toward the lighter white pizzas: a Margherita, Porcini, Pera and Tonno. The wood-fired crust is not too chewy, not to crispy, mostly with blackish bubbles around the edges. The fresh basil and tomatoes stand out with the classic margherita, as do the slices of mozzarella. The Porcini — a white pizza — was a bit more complex, with a medley of earthy porcini mushrooms, salty pancetta and truffle oil. The Pera — another white — with arugula, sliced pear and Taleggio cheese offers a slightly sweeter essence (fans of pineapple on their pizza might enjoy this alternative). The Tonno, meanwhile, is also white, and topped with meaty tuna fish, cherry tomatoes and basil. All were also drizzled with a nice touch of EVOO. 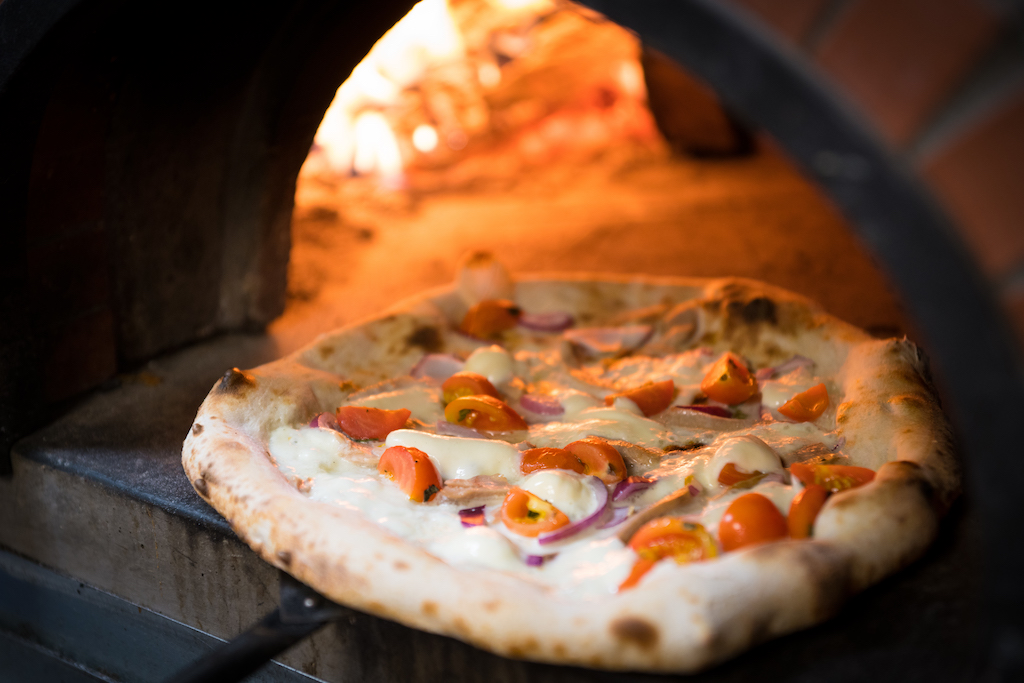 For sides, a variety of salads, shareable cheese and meat platters and folded saltimboccas — basically a pizza folded like a sandwich — plus desserts are all on hand making for a low-key, yet focused menu. As for drinks, customers can pick from Italian-style cocktails like a Negroni, as are the wines. Bottled domestic and imported beers are available, in addition to sodas and bottles of Topo Chico sparkling water. A nice touch is an Italian coffee menu, reminding us of the cute little cafes in Italy. 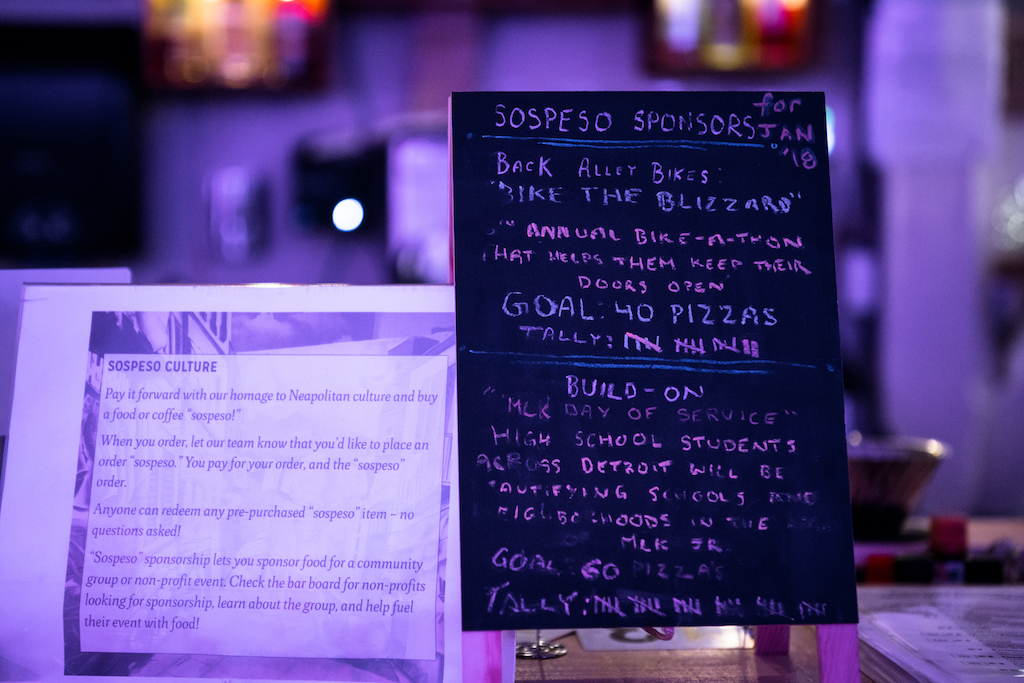 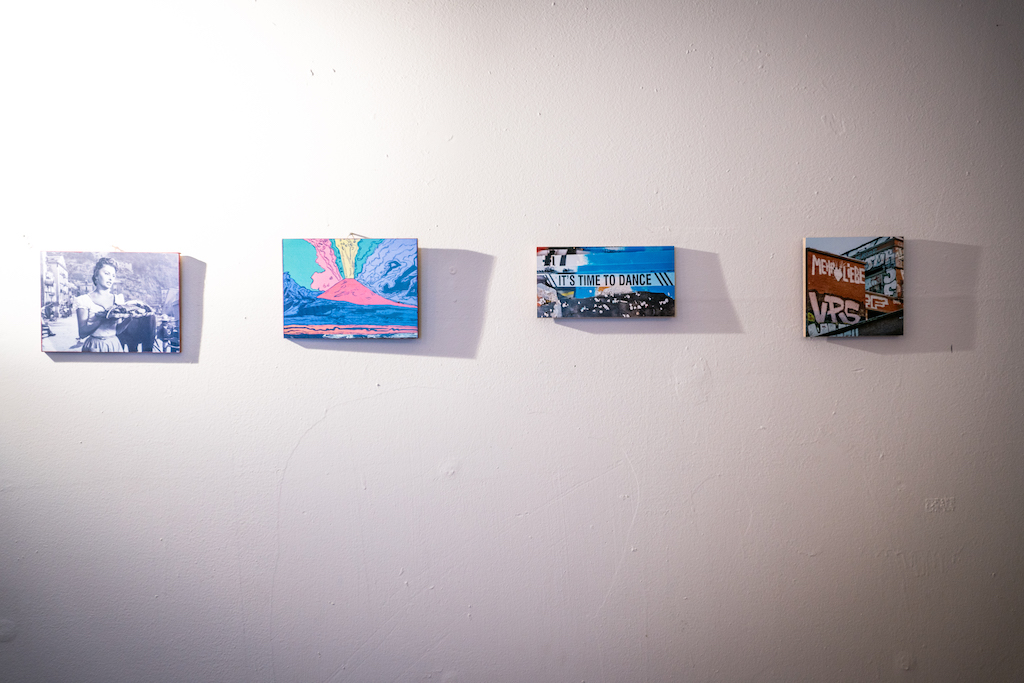 One of the things that stood out to us most is its “low-profit” designation. Now, before you scoff at the notion that a restaurant might be trying to pass itself off as a charitable organization (no, they’re not a tax-exempt nonprofit), what this really means is that social values like sustainability, community wealth and social justice are simply etched into its business plan from the start. Hence the greens walls and the community gathering space (which Carreon hopes will be utilized more by organizations and neighbors as time goes on) and the restaurant’s “sospeso” concept, which Carreon explains to Tostada as like the Italian equivalent to paying it forward. Guests can opt to purchase additional pizza on top of their regular order, which goes to a local nonprofit. Last we visited, the charity of choice was Back Alley Bikes, which provides cycling education and outreach to Detroit youth. Down the line, once PizzaPlex starts turning a profit, the couple hopes to operate like a co-op, where proceeds are shared with the employees.

As the sting of gentrification creeps into more and more Detroit neighborhoods, it’s principles like these that could be the anecdote folks are looking for… That the pizzas are delicious and affordable is an added bonus.

(All photos by Rizwan Lokhandwala. Check out more of his work on camera on Instagram @naaksaafkur)