America was in throes of a crippling recession. More families than ever were enrolling in the federal food stamp program to put meals on the dinner table. And in Detroit, which just a few years earlier was in the midst of the 1967 uprising that forever changed the city, its first African American mayor, Coleman A. Young, was trying to heal a community battered by political, racial and economic unrest.

Young did away with the police department’s controversial STRESS (Stop the Robberies, Enjoy Safe Streets) unit created after the riots and that civil rights leader contended unjustly targeted African Americans. And to restore trust between resident and DPD, a  mini-police station program was implemented in neighborhoods citywide.

On the food front, the administration launched a program that would go on to inform much of the nation’s urban farming movement.

It was called the Farm-A-Lot program and it started as a pilot project ahead of the 1975 growing season. Residents were provided with seeds to grow a garden that would harvest enough produce to feed a family of four, along with technical support to prepare soil and canning demonstrations and supplies for food preservation.

“During the past several years Detroit’s economic problems have increased faster than in any other major city in the County,” reads a summary of the project when it was implemented in the spring on 1975. “Nowhere has the impact of these problems been felt more by Detroiters than in the area of trying to feed their families.”

Read an excerpt of the Farm-A-Lot summary (obtained from the Detroit Public Library’s Burton Historical Collection) below: 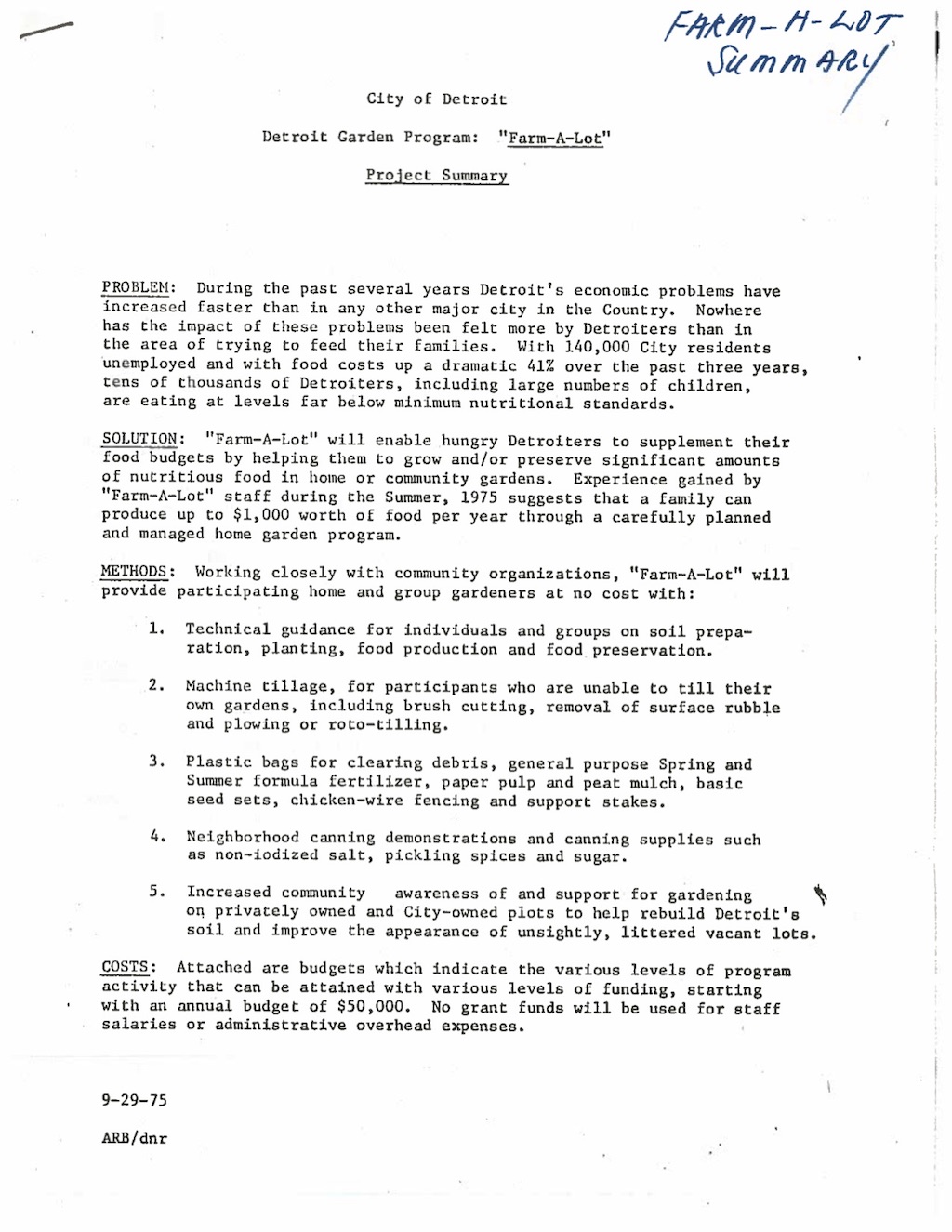 The Coleman administration was inspired, in part by an urban farming initiative that sprang just around the turn of the 20th century under Detroit Mayor Hazen S. Pingree, who encouraged the planting of potato patches to address vacant land and ease issues with hunger. 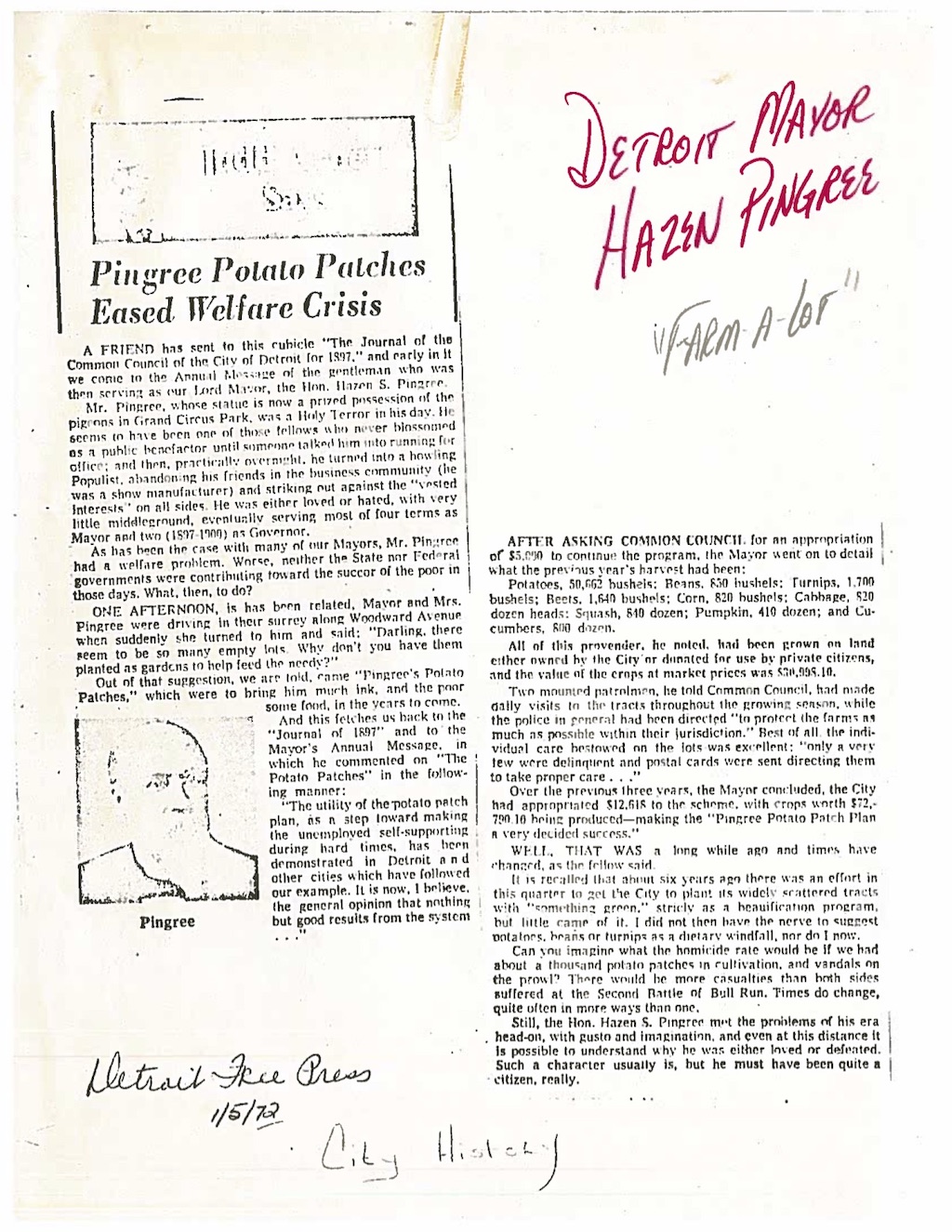 While Pingree’s earlier effort influenced some of the Coleman administration’s Farm-A-Lot planning, it was perhaps the interest of residents whose Southern roots instilled a love for agriculture, as noted in this essay by FoodLab Detroit’s Devita Davison, that helped garner support early on.

“Many black Southerners migrated north from the Jim Crow South to escape the drudgery of farm work. That said, they couldn’t deny the farm knowledge they had accumulated,” says Davison in the essay, Northward Bound, published last year in Southern Foodway Alliance’s quarterly magazine, Gravy.

Detroit’s Farm-A-Lot project wasn’t the only urban gardening initiative to take place during that period. Cities across the country were grappling with high unemployment rates and food insecurity and thus urban garden initiatives began sprouting up in other major urban areas.

The gardening was believed to help ease the financial stress of struggling families. 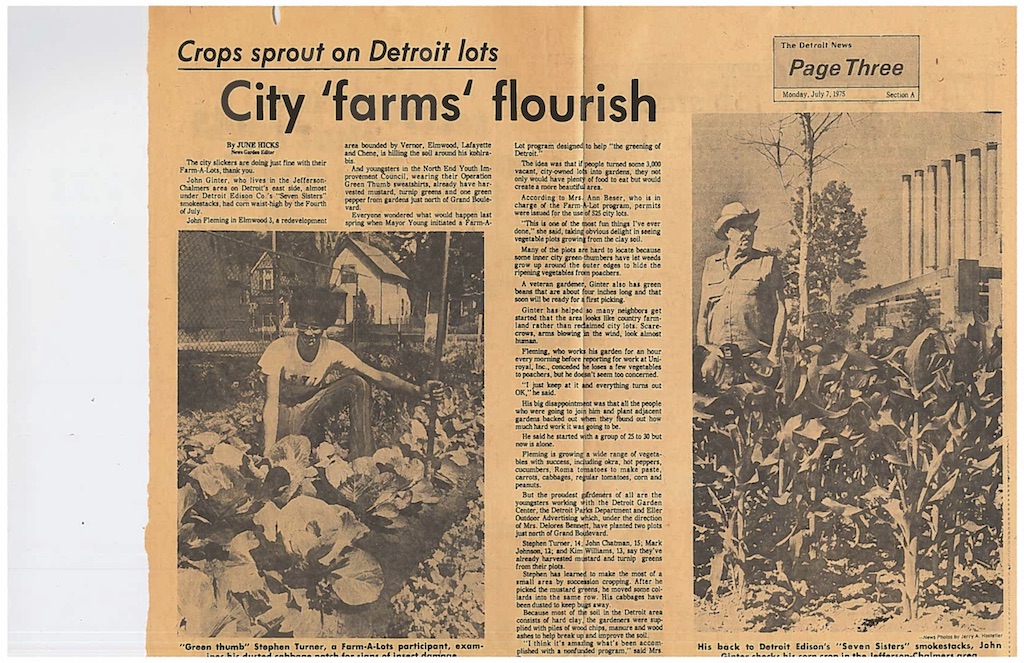 By 1979, nearly 7,000 Detroiters were cultivating gardens on otherwise vacant lots across the city. Nearly 40 larger community gardens had been plowed and special attention was paid toward developing garden space at the city’s housing projects, and the neighborhoods of Jefferson Chalmers and North End. In 1979, the city also launched its first Growing Roots Garden Contest on Belle Isle to recognize folks who were especially active in the growing movement.

By the 1980s support from the city began to wane, but the seed for continued urban farming efforts was planted.

African-American elders known as “Gardening Angels” set up community gardens as a means to empower youths and instill the importance of self-reliance, says a 2009 article in The Nation authored by the late Grace Lee Boggs, one of the nation’s longest oldest human rights activists and a longtime Detroiter.

Today, Detroit is home to some 1,500 urban farms and gardens — from personal backyard plots to market farms that span several blocks, employ neighborhood residents and supply their harvests to local markets and restaurants throughout the region.

While Young’s legacy is often a matter of debate among Detroiters, it’s clear that the administration’s Farm-A-Lot program laid the groundwork needed to cultivate a generations-long urban farming movement in Detroit.