We arrived at the Dark Sky Park, just west of the Mackinaw Straits, a bit after 5:30 p.m. After a 4-hour car ride, on a balmy 80 degree day, I looked over the blue waters of Lake Michigan. She called me to jump in.

But before I could replenish myself in the fresh lake water from the exhausting hours of preparation, I had mouths to feed.

I had spent the previous night prepping dinner for that evening, getting ready to feed 33 black and brown Detroiters; six mommas with 21 kids, six of which were toddlers. I wanted them to have a hot meal before the night’s festivities. Coordinating the food for the weekend was one of the larger organizing tasks for this trip. I hardly slept the night before prepping vegan tostadas with “chicken of the woods” — mushroom fajitas — that I had foraged the week before. Dutifully, I parked my car near a sandy path overlooking the beach, whipped out the mini stoves and began heating up the fixings, just in time for the first travelers. The whole crew was there by 6:30. The aroma of ancho-spiced mushrooms, black beans and rice, fresh onions, tomatoes, and salads from my garden took over the parking lot, farm-to-tailgate style.

Passersby glared at the spread. We smashed. Even the pickiest of kids enjoyed the meal.

I was the age of some of these toddlers when I made my first pilgrimage to the Michigan’s northern forests, lakes, and rivers. It was a yearly thing for our large boriqua family. My love and passion for nature was further nurtured by my abuela who took my siblings and cousins on long hikes, off the main paths, up rivers and hills through the region’s metro parks. She had grown up in the mountains of west Puerto Rico and outdoor living was part of her nature. As Detroiters we are far less exposed to nature on a day to day basis. Today, it’s something I practice with my friends and young people I work with; foraging for mushrooms, mapping fruit in my Detroit neighborhood, kayaking anywhere I can get my recreational craft onto the water. I also harbor nature on my community farm, Southwest Grows. I aspire to be like my abuela, facilitating forays into nature for young Detroiters. 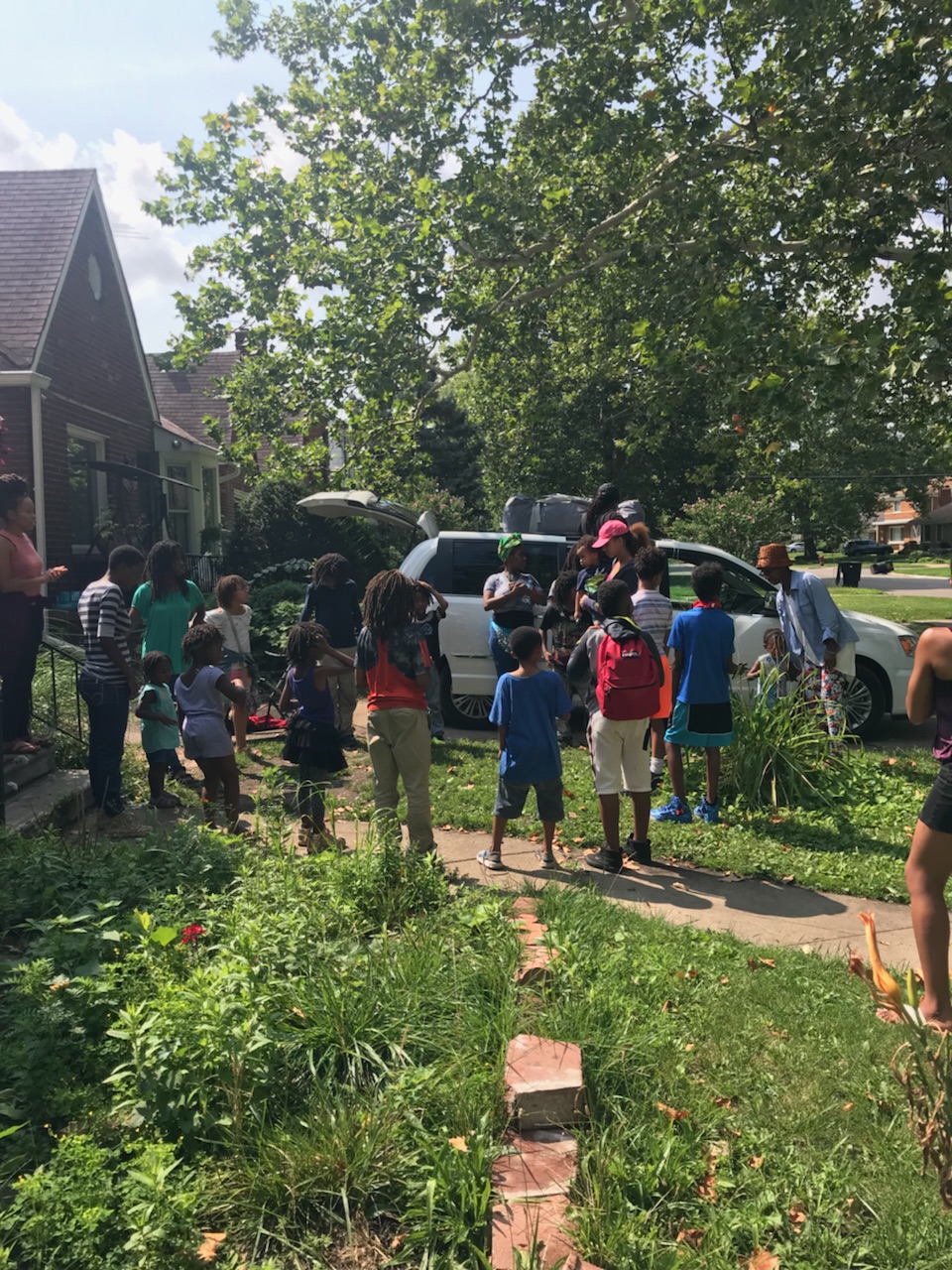 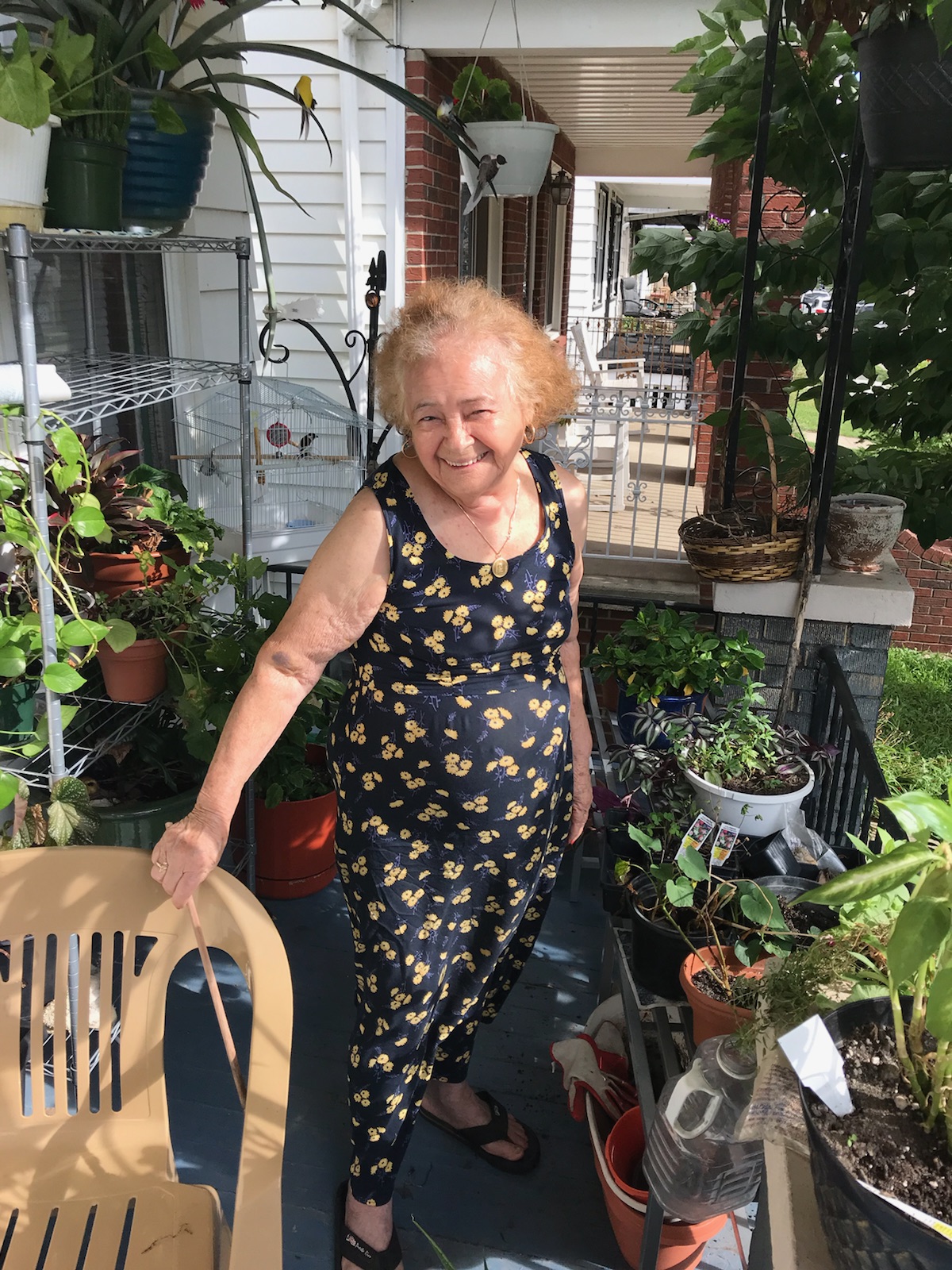 There is a movement happening across the country, black and brown young people and families from the city are seeking to reconnect with nature. #detroitoutdoor #outdoorafro and #latinxputdoors are some of the hashtags we’ve been using to connect these experiences. For many urban communities, disconnected and hemmed in by the precarious white suburban sprawl, the distance between ourselves and Mother Nature feels so vast with the costs and knowledge to entry feels so prohibitive. Surveys show that black and brown folks are disproportionately underrepresented in our nation’s public parks. Deeper still, many of us have historic traumatic relationships with land, water, and agriculture. But we can’t let racism, inexperience, structural inequality and our own hang ups stop us from familiarizing ourselves with her.

We consider reconnecting with land and nature ancestral work. What started with two families, soon ballooned to six as friends invited other friends, building off the success of a spring time excursion to Proud Lake. Loosely, we are black, brown, vegan, activists and conscious comrades working in and among the food justice and Afrocentric communities in Detroit. 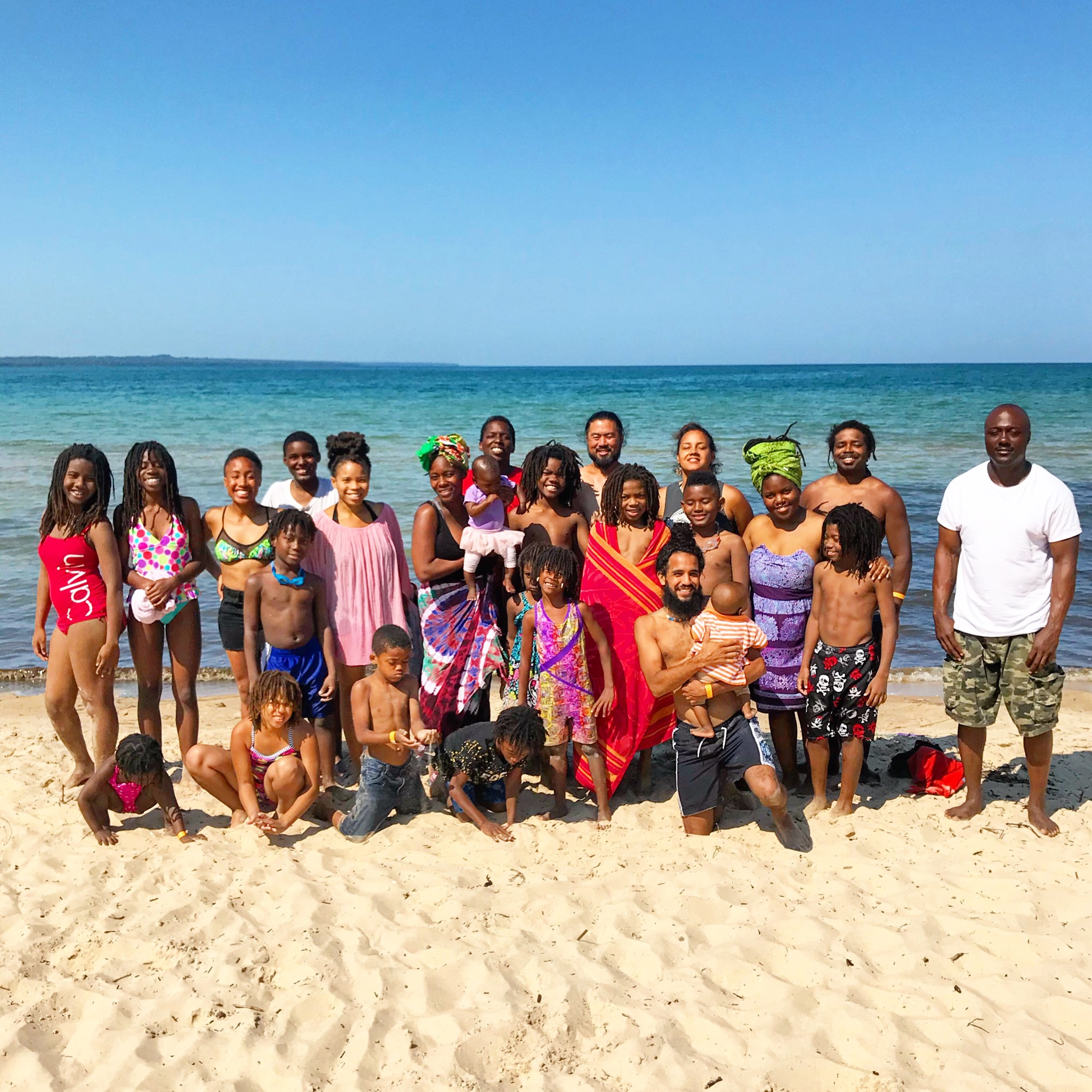 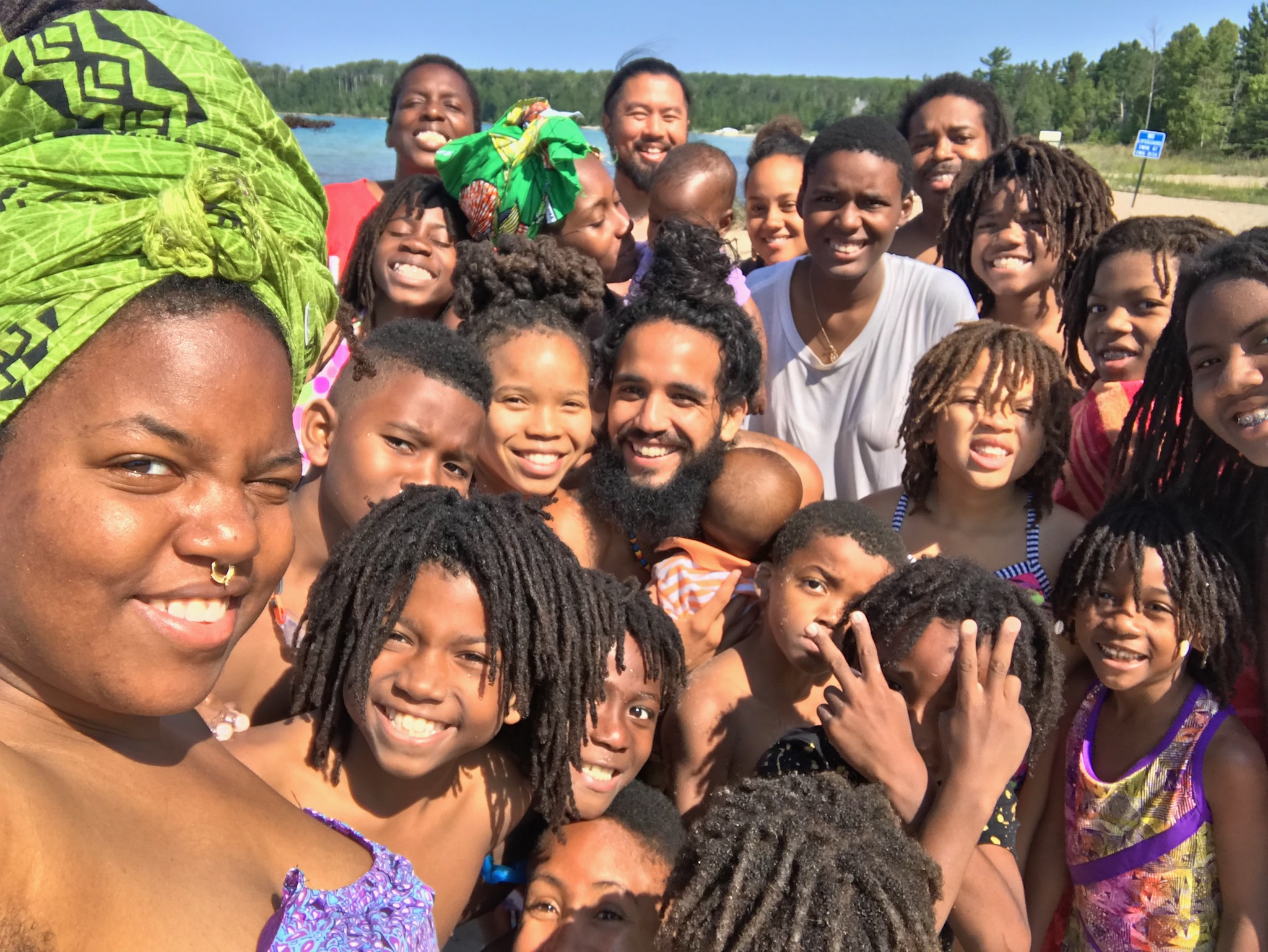 We had a conference call the week before to trip to layout the trip’s agenda and to coordinate. After a lengthy discussion on food, we decided to share meals to save prep time, avoid redundancy, reduce waste, and save money.

Despite what one might hear about the city being a “food desert” or about the unhealthy eating habits of urban people, our crew was largely vegan and vegetarian. Good healthy food is important to many Detroiters. To accomplish the task of feeding so many, we created a separate food committee. Many of the non-parents stepped up, I think in part because so many of the parents were overwhelmed trying to prepare and already stretched thin.

To be honest, we all are. Black Detroit has suffered enormous economic strains and dispossession over the last 15 years. In that time frame, one in three Detroiters lost their homes to predatory banks and tax foreclosures – my family included. Shane, Whitney, Mama Bianca and I formed the food committee and got to work organizing two breakfasts, two lunches, and two dinners. Each person on the committee took charge of a meal or two. We used Google Docs to organize the menu for the weekend and shared grocery shopping lists. I was sure to bring lots of food from my farm, Southwest Grows; (check out our farm work with #swgrows on Instagram). In total, we had 5 pounds of fresh potatoes; four large bunches of kale; 2 pound of tomatoes; 3 pounds of broccoli and plenty of fresh chopped parsley and basil.

Hot tip: do a majority of the food prep, chopping and as much cooking as possible in the comfort of your own kitchen! 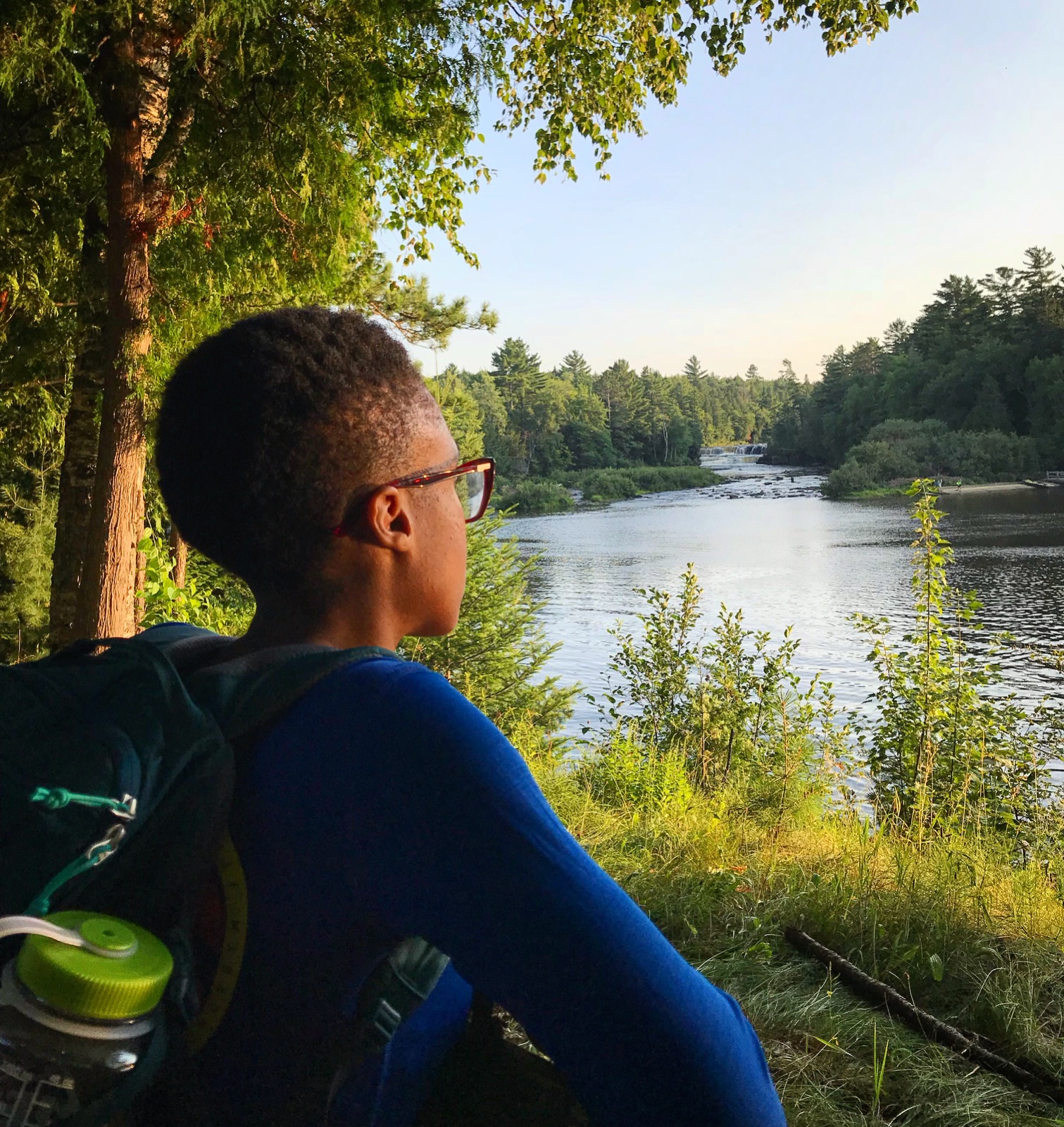 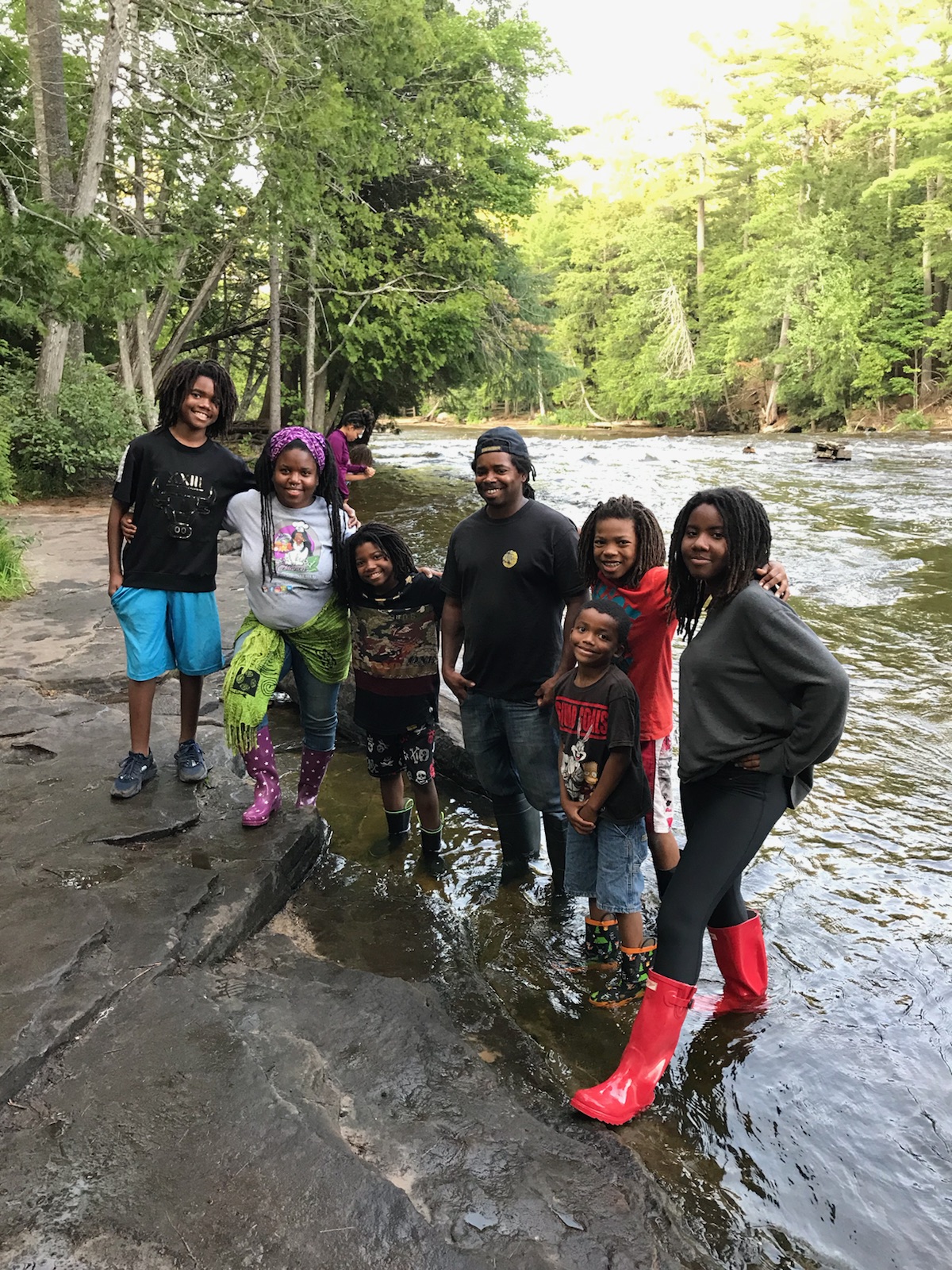 The food and travel agenda began with brown bag lunches prepared by Whitney and consumed en route to the Dark Sky Park  in Mackinaw City. There, we warmed up food for our tailgate vegan tostada feast. That night we stayed up late watching the galaxy above up light up from Perseids Meteor Shower in Dark Sky Park and falling asleep on the sand. The following morning we woke to a “grab and go” fruit, yogurt, granola and nut tailgate breakfast before swimming in Lake Michigan for a few hours. We then continued our drive north into the Upper Peninsula and onto Tahquamenon Falls where lunch and dinner were merged, headed up by Bianca and family. We ate a vegan curry soup, leftover tostadas and veggies cooked in the dutch oven. We closed the evening visiting the waterfalls, before retiring back at the camp for s’mores and fireside comaraderie. Shane used leftover veggies to put together a large breakfast frittata. 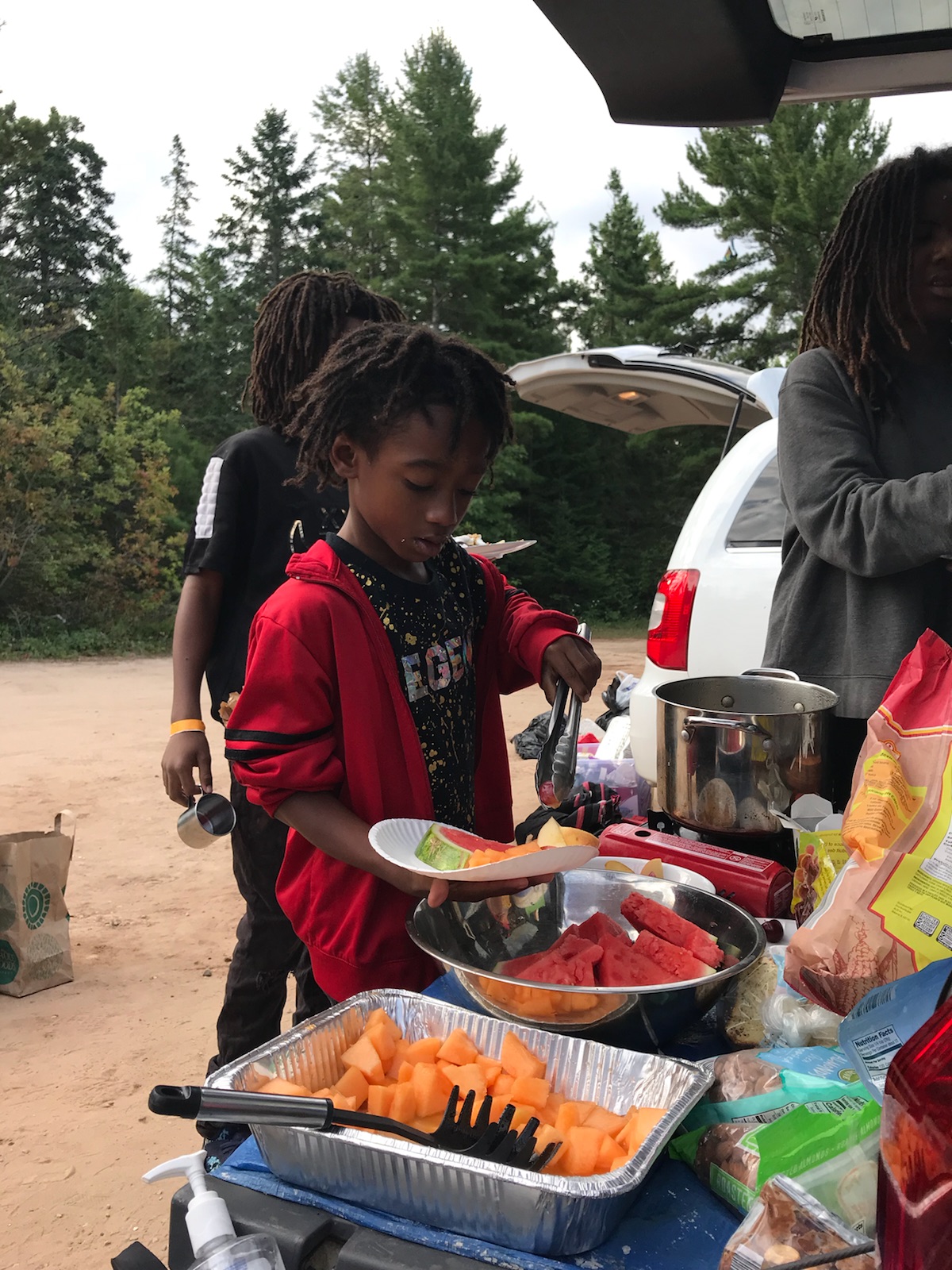 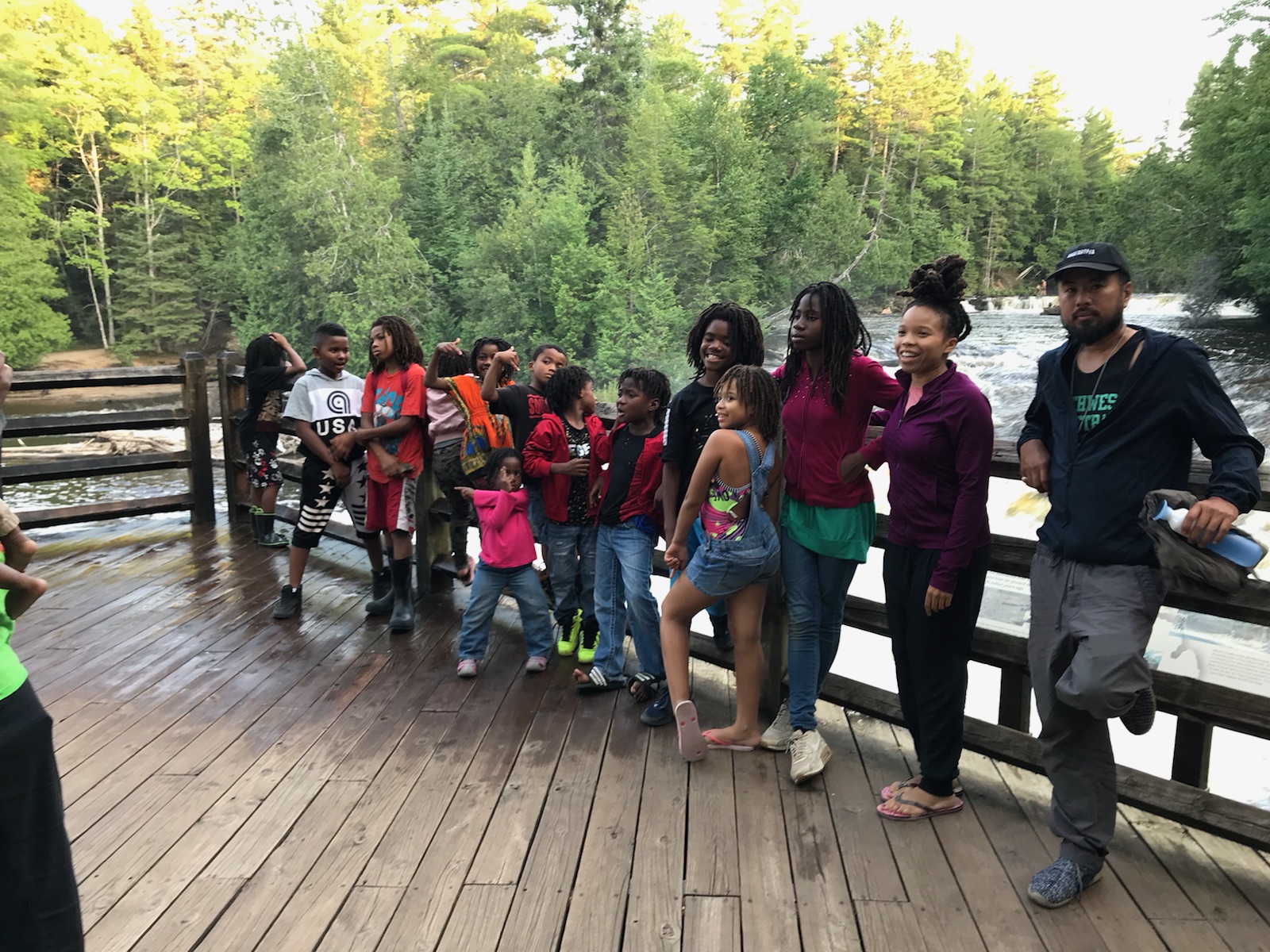 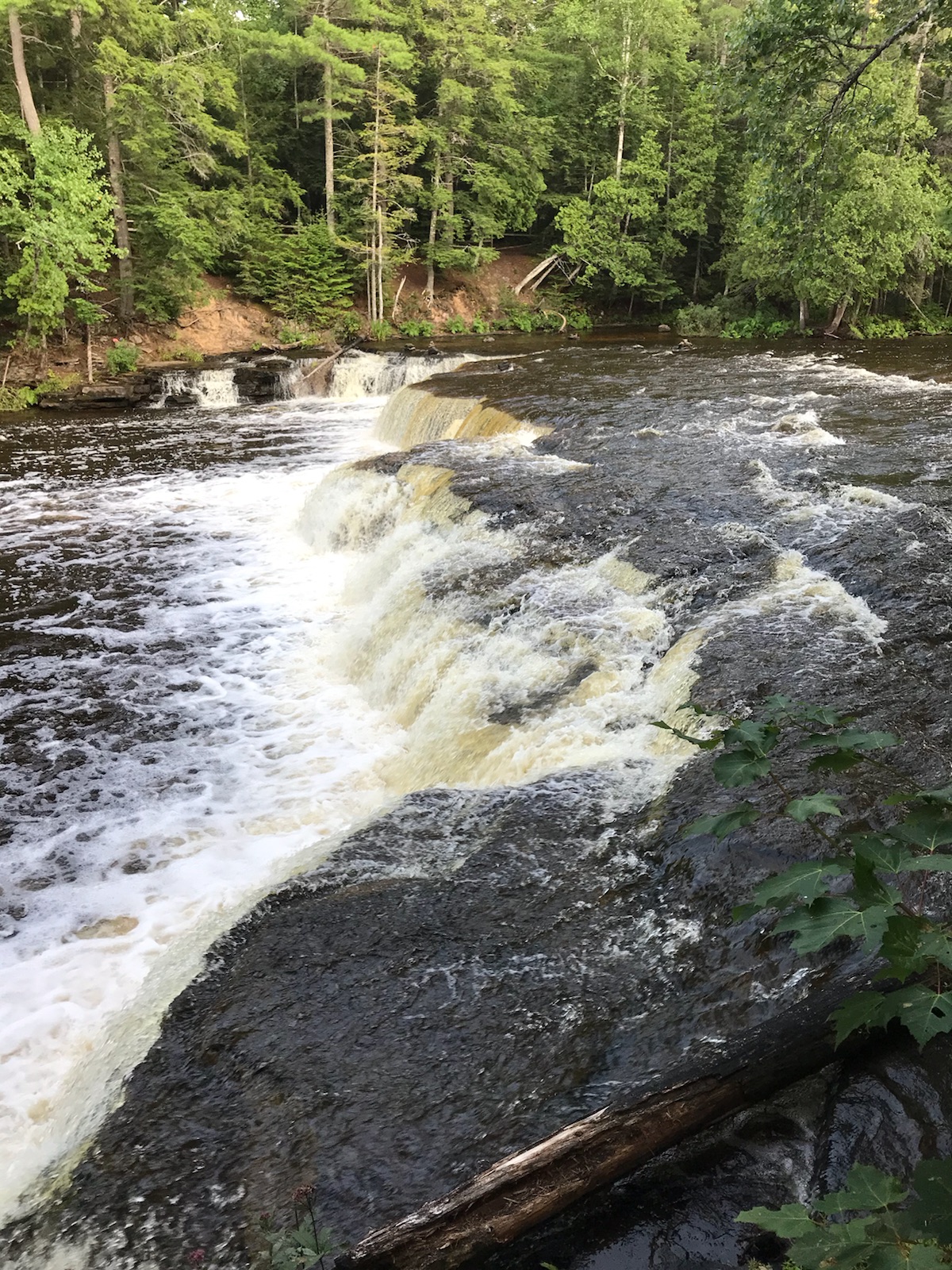 Saturday night, everyone was exhausted, the adults had just sent the children to sleep, a few teenagers and adults sat around the fire. This meal was totally unplanned, but after the merged lunch/dinner, many of us were hungry and wanted a healthy snack after engorging on s’mores. Mama Bianca was skeptical about cooking so late, but we didn’t actually need to do much prep and her daughter Lauren really wanted this meal. Bianca and her family have an amazing Vegan catering business Real food. By Bianca, so Lauren knows her way around the kitchen. The dutch oven is a large cast iron pot perfectly suited for quick and easy camping meals. We coated the caste iron pot with olive oil, coconut water and coconut oil. We chopped up eggplant, Brussels sprouts, broccoli, greens from the farm, potatoes, and leftover rice seasoned with a salad dressing (salt, pepper, apple cider vinegar, olive oil and garlic toum — a Lebanese-style garlic spread), white pepper, salt, and some curry. It all simmered together for maybe 15 minutes before we pulled it out of the fire and feasted on an incredible, healthy, vegan late night snack.

Moral of the story… get a dutch oven for camping trips. Pre-wash and chop veggies to save yourself time and be flexible for cooking on the go! 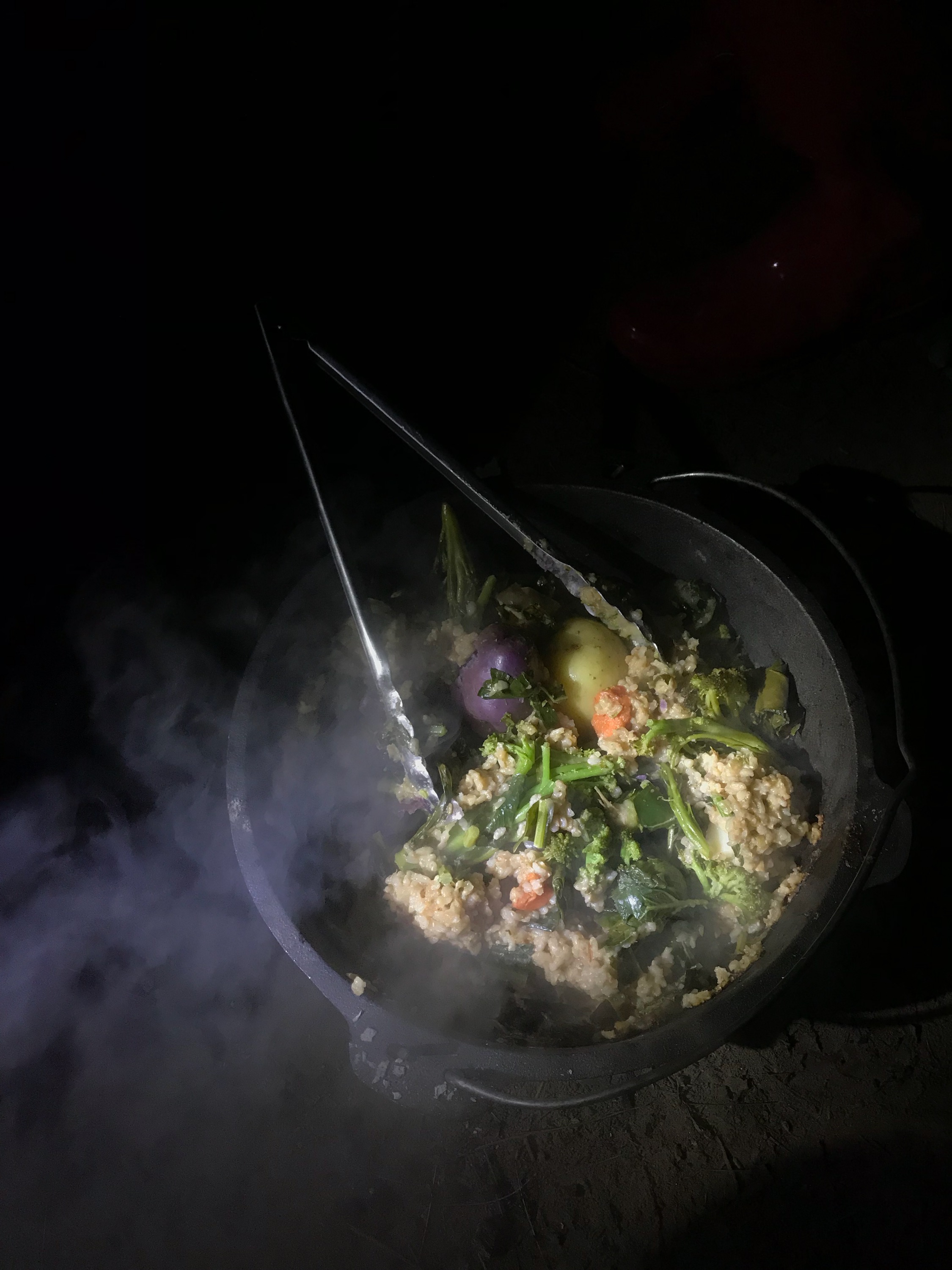 By making this trip and continuing to expand this outdoor culture among urban youth, we reclaim our relationship with Mother Nature, and instill values that they will pass along, and expand upon. This is intergenerational work, taking the steps to heal ourselves of both environmental and social traumas that the land and its displaced progeny, have historically endured. The Anishinaabe indigenous of this the Great Lakes often speak of thinking 7 forward and backward. With ever intensify climate chaos, we need city folks to reacquaint ourselves with Our Mother, that way we are far more likely to love, cherish and protect her for future generations.