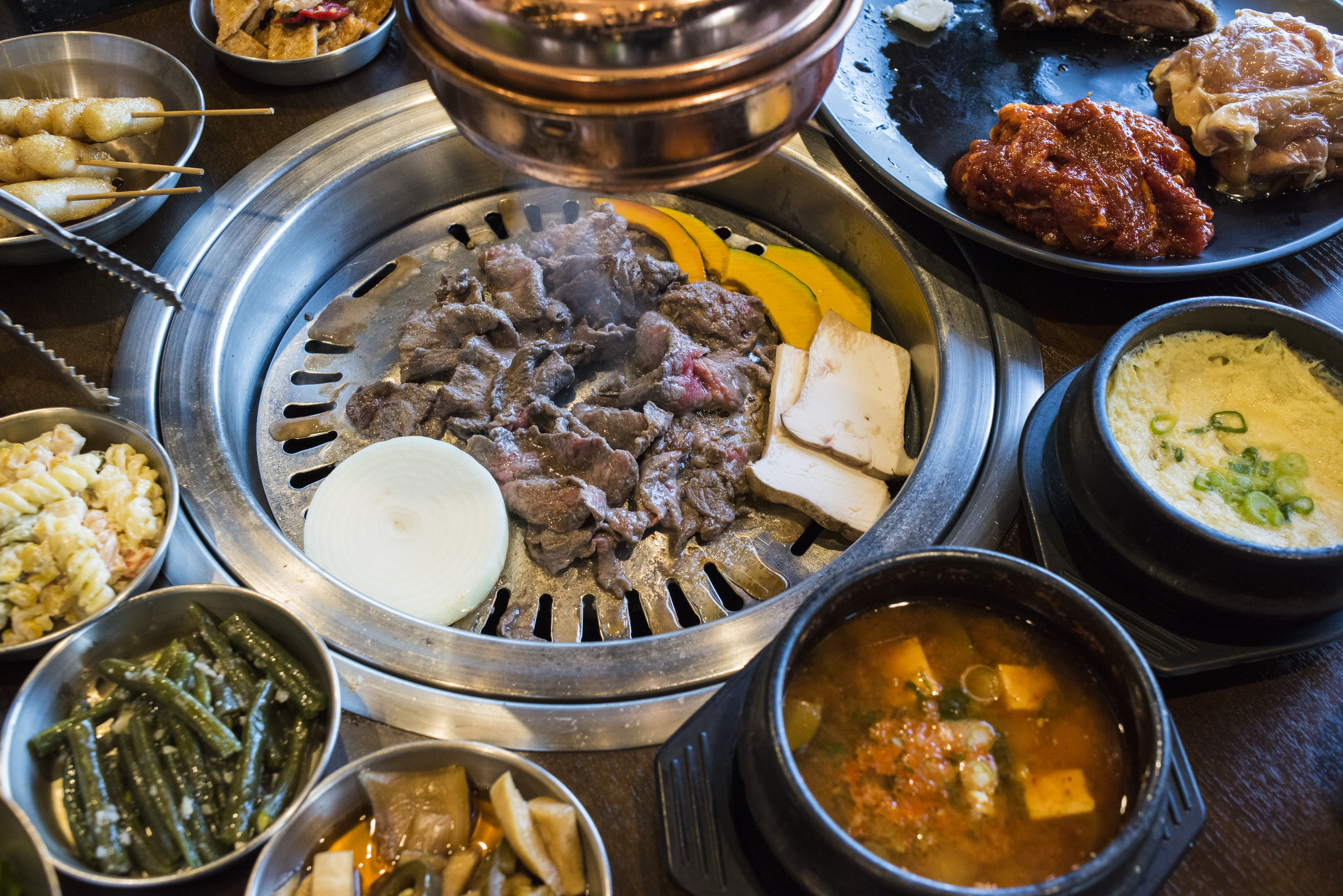 They like it hot. Right off the stovetop. Korean Barbeque.

“Let’s say if we cook the food for you; you don’t really get that taste right. The taste of where you can cook your meat to whatever you want to,” co-proprietor, Lina Yi said. “Koreans love to eat their food really hot, which is why the grill is at the table.”

Lina and her sister Sarah run the big building on the service drive where I-696 and the Lodge meet Telegraph. Formally known as New Seoul Garden; New Seoul Plaza owned by the Yi family has reached its one-year anniversary since renovations where it is now three concepts in one building.

Enter the front door and to the left is Jinji Korean Cuisine & Soju Bar, a sleek bar and grill where you can order garlicky honey wings or spicy rice cakes and knock back a fruity soju, considered the signature boozy beverage of Korea. To the right is Myomee Cafe where folks can swing by for coffee drinks, Korean pastries or the house specialty bingsu, a popular shaved ice dessert in South Korea, but with a few updated touches.

In the back, is the hidden gem of it all, Daebak, one of the few places in southeast Michigan where you can find Korean BBQ.

In the plaza, the Yi sisters wanted to push their family’s legacy forward for the next generation of Korean food lovers. And their first year in, they seem to have accomplished it in delicious fashion. On an early Friday evening, almost every table was filled with all types of customers. Some Asians, some black and some white; the diversity of ethnicities and ages range. I see a young Asian boy and his family devouring their pork jowl right off the grill.

Lina warns me that the smell of the BBQ sticks on your clothes, and it does. The smokey aroma of barbeque that wafts through the air excites your hungry belly the minute you walk in.

It’s loud. People have to be loud to be heard over the sizzle of the stovetops that sit at the center of each table; a great way to socialize and eat good Korean food.

The food comes out quick. The server will bring out plenty of side dishes—called banchan. According to Sarah, all of the banchan is made in house. Like the mandu, a deep-fried dumpling with your choice of meat or veggies filled that is savory when paired with their side sauces like the sesame oil, given. The kimchi is made in house and the fresh ginger pairs perfectly with the fermented radish and cabbage. 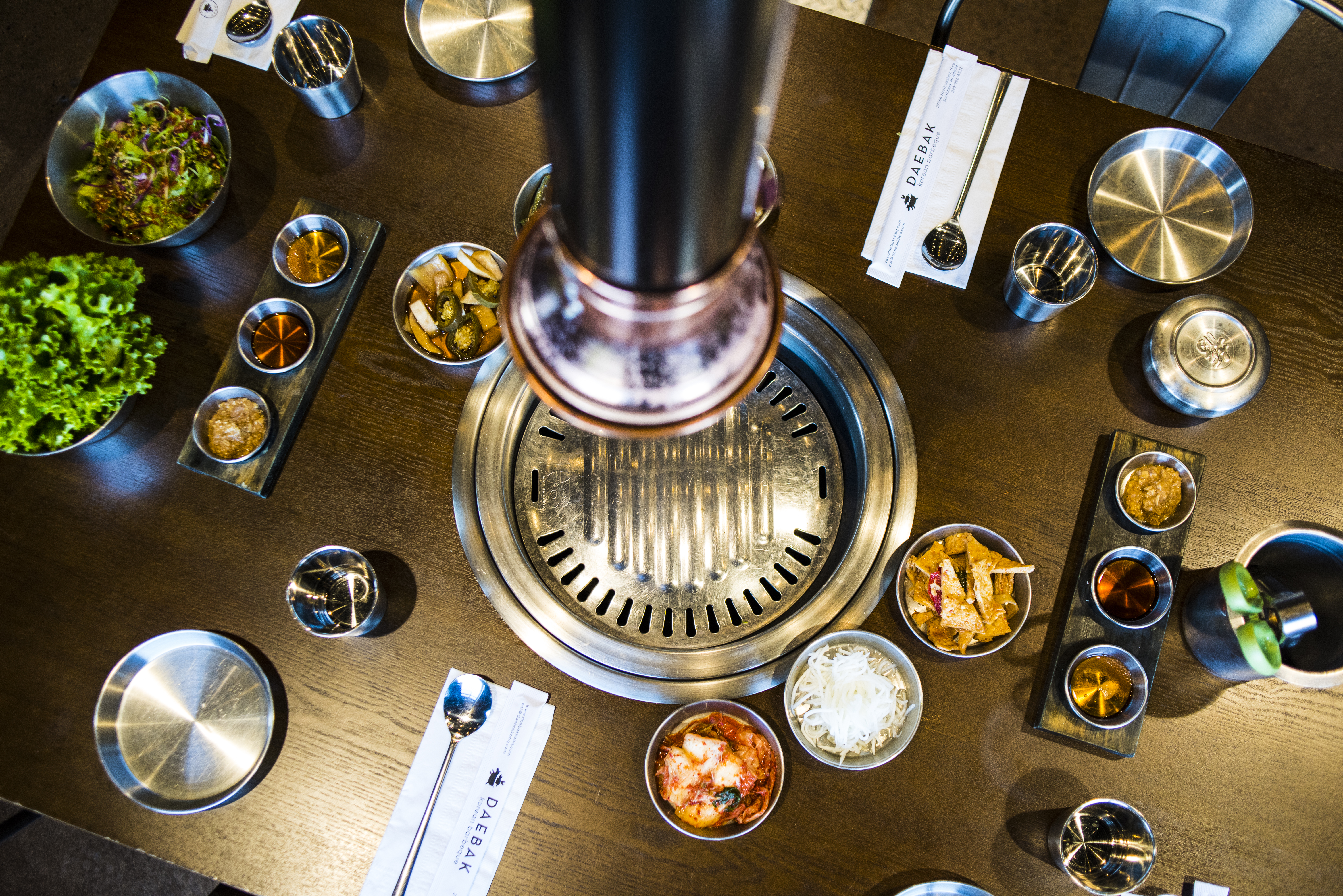 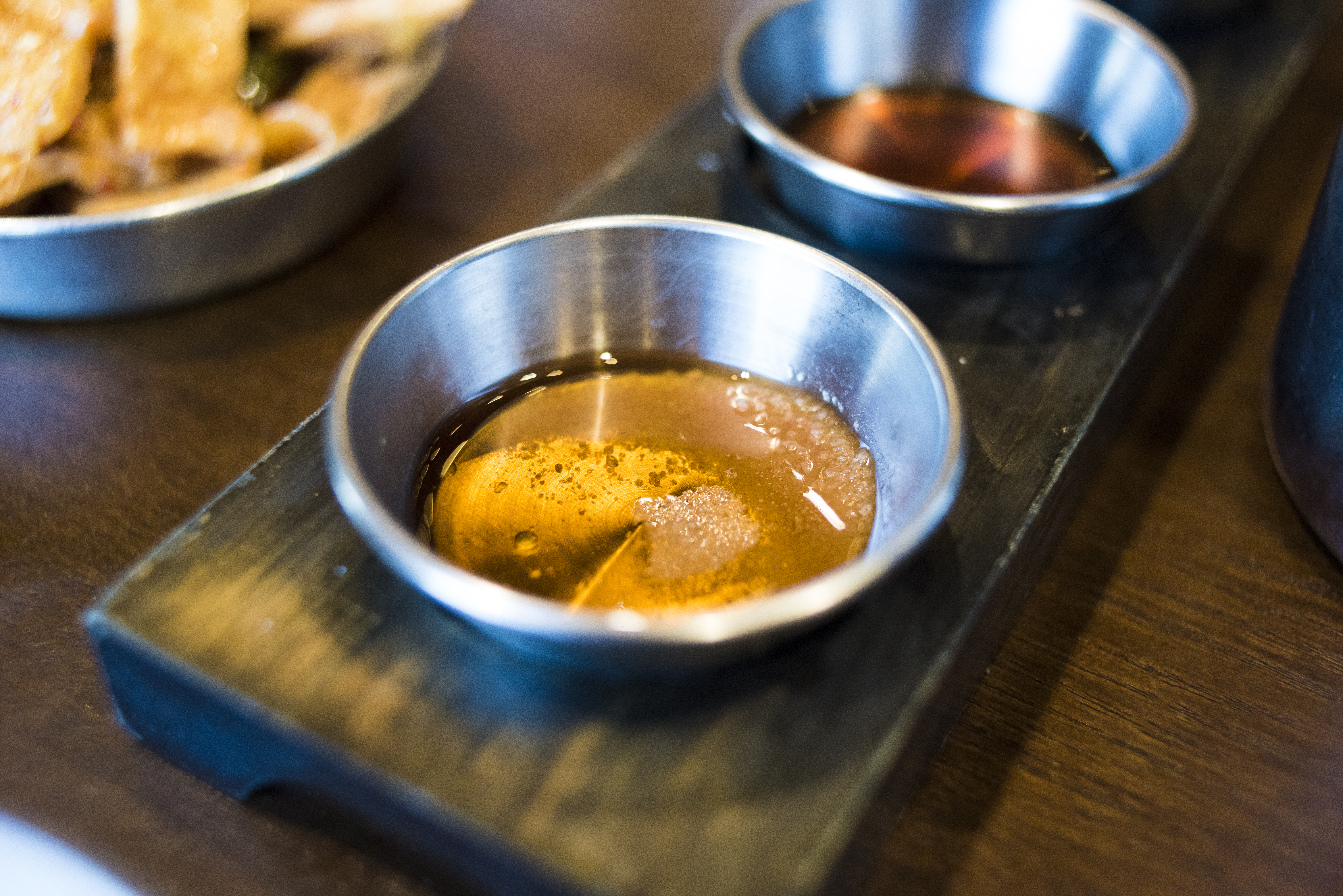 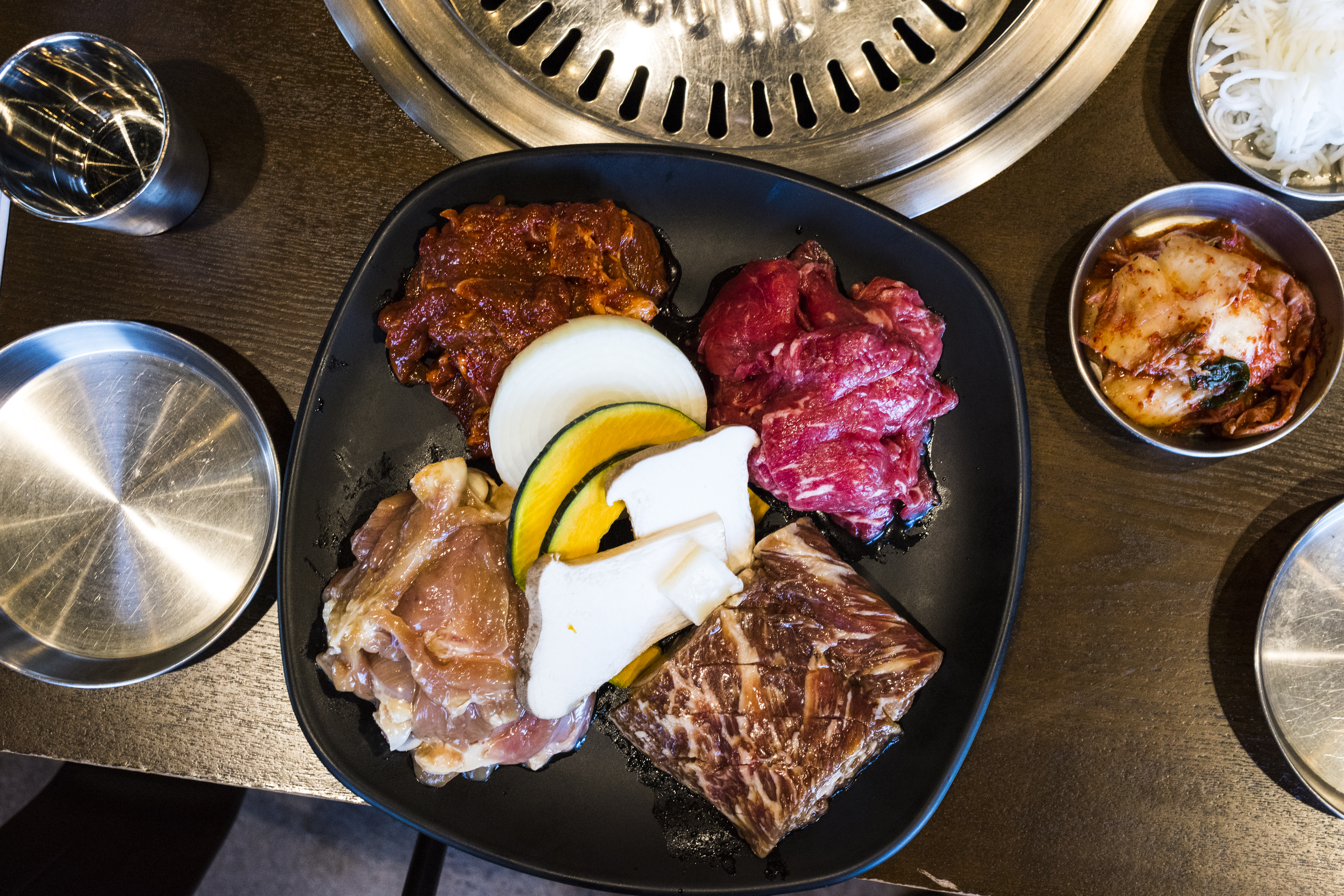 Many of their sauces are made with soybean, sesame oil or chili paste/oil. Nearly every dish has a little kick to it. Not an overwhelming spice but the chili oil does tickle your throat.

According to Lina, to keep their cuisine as authentic as possible they source many of their products, like their Asian pears or pork belly from Korea. The Asian pear has more of a crunch to it and sweet floral notes. They also serve many Asian beers, alcohol and that specialty soju. Similar to vodka in that its colorless and made with starches like potatoes, soju is smoother going down and is available in a variety of sweet, fruity flavors. Soju is the most consumed alcohol in Korea and is also popular in Japan and China and Korea.

“A long time ago when this place used to be New Seoul Garden, we used to have Japanese food too, which included sushi. We got rid of all of that because people kind of got confused thinking Japanese and Korean was one type of cuisine,” Lina said. “So, when people come in and it’s their first time or they haven’t had Korean food before; we would like to explain to them, you know, what side dishes are and how the food is.” 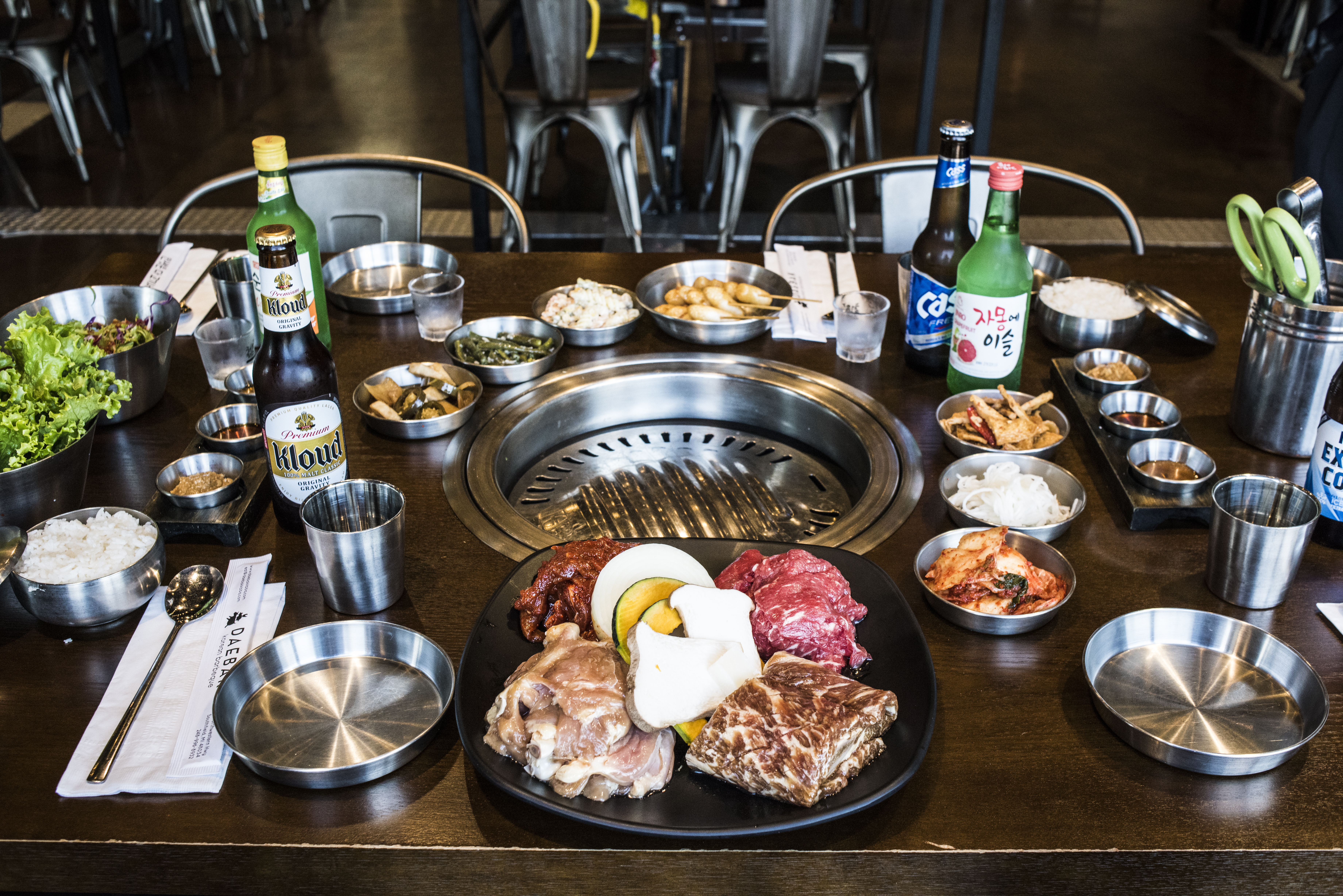 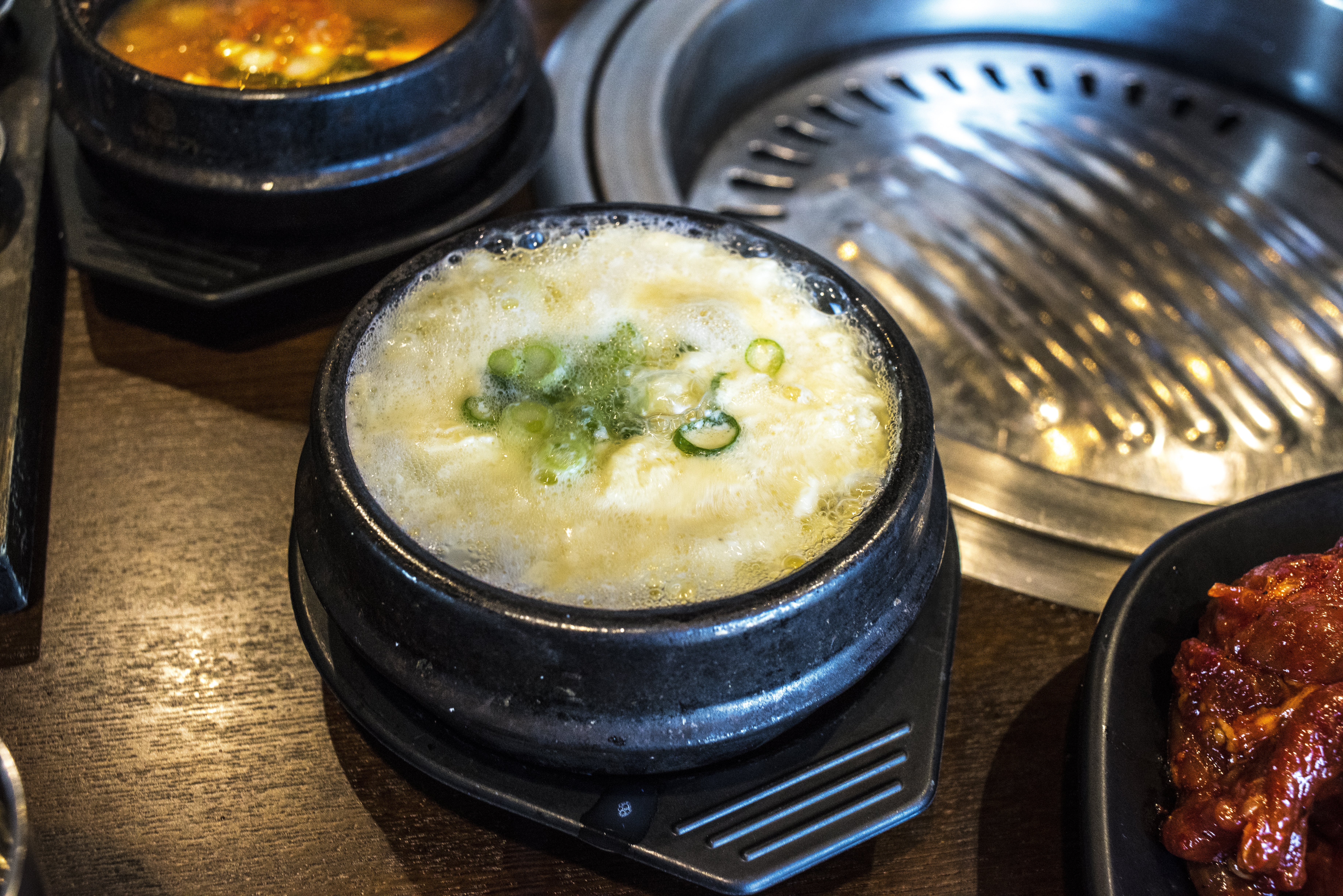 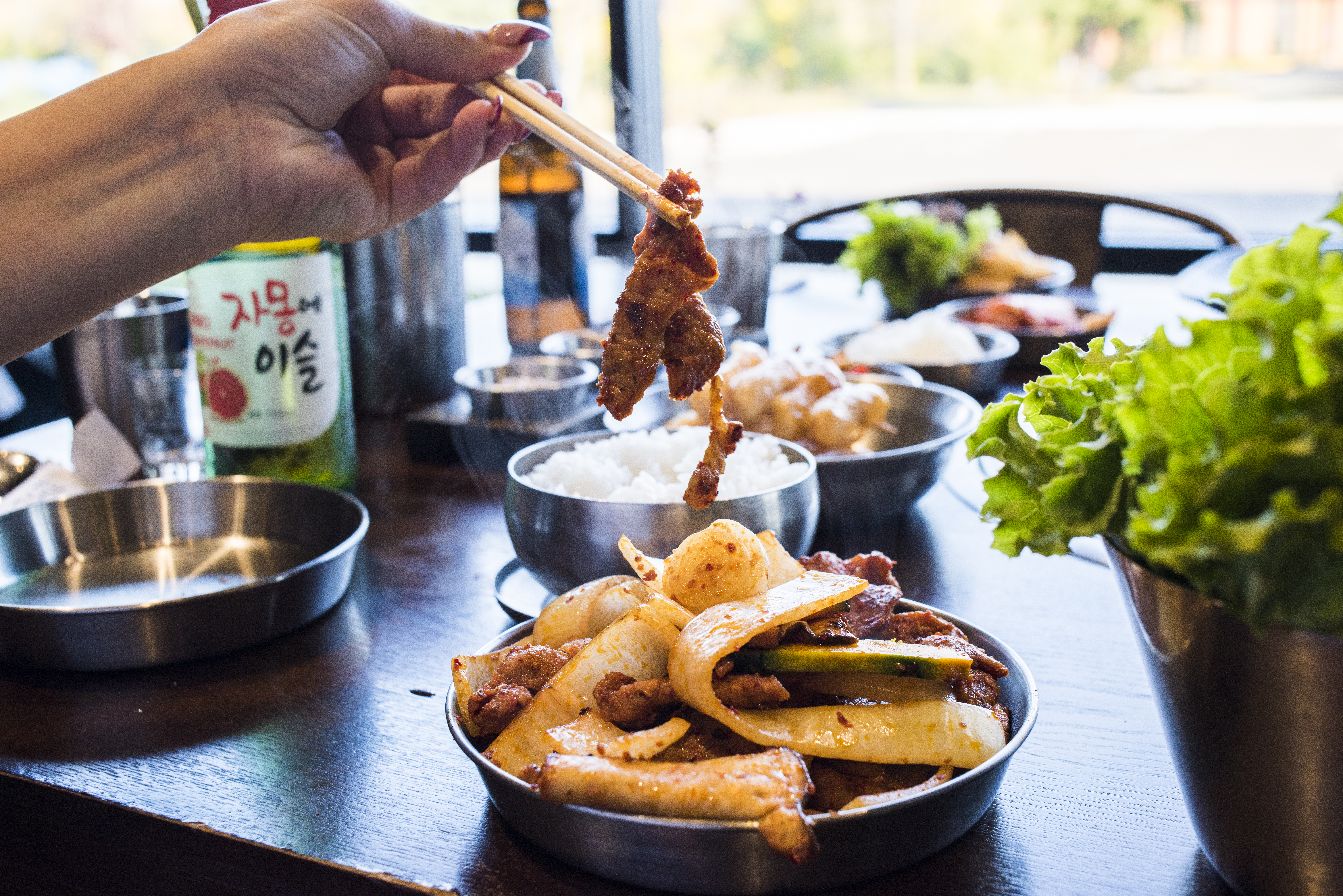 Most of the customers order their platters which consist of a variety of things like bone-in short ribs, prime ribeye, marinated short rib bites, pork belly, pork jowl, marinated pork shoulder, or marinated chicken (Daebak Platter). According to Lina, each meat is prepared and cut in such a way that it is easy for the customer to do the final step which is cooking it. The meat is tender and juicy, imparting a rich umami taste. The marinated short rib is sweet yet savory. There are vegetarian and vegan options as well.

“My favorite, it’s going to have to be the Daebak Yangyum Galbi which is our marinated short rib. It’s very tender,” Lina said. “The reason why is because a chef who makes our meats use lots of different fruits. He said it’s the hardest thing for him to make because the fruits he uses which is a variation of pineapples, pears, and apples.”

According to Lina, there’s a misconception about going to Korean BBQ. With the stovetop at the table, one might assume that it’s more of a DIY activity. But you aren’t actually cooking your own food, you’re taking the final step of putting it on the grill. The back of the house still does all the legwork: preparing all the cuts of meat, marinating, assembling all the ingredients, creating the sauces. All that’s left is for each diner to make it their own, add just what they want at whatever their heat preference. It is a very social and exciting experience.

If you aren’t stuffed by the time your check arrives, you can head over to Myomee for one of its famous bingsus, topped with condensed milk and red beans and your choice of other fanciful toppings like Fruity Pepples, seasonal fruit, nuts, boba, mochi, and more. This sharable, fluffy snow-like dessert looks like a behemoth but it easily melts in your mouth without the guilt. For a nightcap, swing by Jinju and take a seat at the bar.

New Seoul Plaza offers a different vibe and experience in each of its brands to cater to whatever you’re in the mood for. And thanks to the Li family, it does so in an excellent way.

New Seoul Plaza is at 27566 Northwestern Hwy in Southfield.