Farhana Quayoum has, like most of us, been struggling to adjust to life in the midst of the global COVID-19 pandemic crisis. While her day-to-day schedule hasn’t changed much, as she homeschools her oldest and has three other kids four and under, her concerns about everyday life have shifted. Her sister, a registered nurse, is working on the frontlines of the public health crisis and she has elderly parents with underlying health conditions.

The second-generation Bangladeshi-American and former school teacher is trying to stay as informed as possible about the precautionary measures she now has to take to protect her family.

Part of that means filling in the potentially life-threatening information void that her parents’ generation is particularly vulnerable to. She says the older generation needs practical advice about social distancing, proper handwashing practices, wearing masks and more so they are better prepared to deal with the severity of the situation.

“There is definitely a language barrier and also a cultural barrier. Many of them need information, tips, and advice through the language they understand. That’s not always accessible,” Quayoum says. “The lack of knowledge and education hinders them.”

Without access to reliable news sources or the ability to meet with others at the mosque or other gathering places to exchange information Quayoum is worried that mis or disinformation could be flourishing in the private social media groups that her community usually turns to for advice. 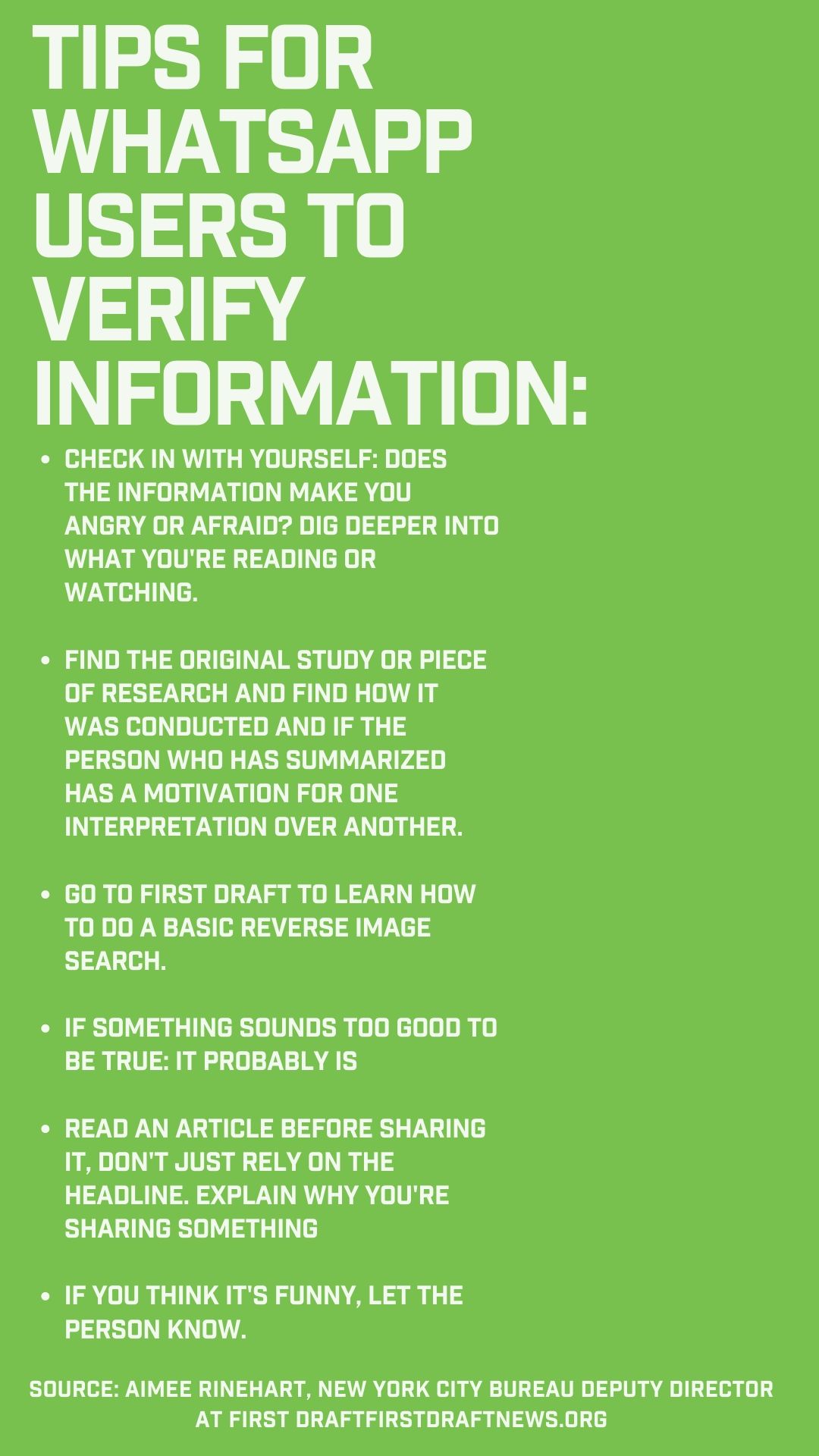 In the United States, WhatsApp has primarily been adopted in diaspora communities; people who have emigrated to the U.S. and have family back home, wherever home is, says Aimee Rinehart, deputy director of First Draft, a global nonprofit working to combat information disorder by teaching verification best practices and techniques to newsrooms.

In Michigan, most of the 50 or so Bangladeshi community organizations maintain their own private WhatApp groups to help members navigate daily life, from finding jobs, receiving updates about happenings at the local majid, to getting help to apply for social safety nets. Members of these groups can communicate directly with their imams, elected officials, social justice organizers, and other trusted members of their communities.

But with the onset of the global COVID-19 pandemic crisis, Quayoum, Rinehart and others are worried that the popular SMS platform is a hotbed for misinformation. Forwarded messages with fake cures and other coronavirus conspiracy theories abound on WhatsApp groups, leaving governments across the world and users alike with a “sense of panic,” Rinehart says.

“That is part of the platform’s appeal and also a hazard in that people share information that is often not verified,”  Rinehart says. “When you forward an image or video, the context does not travel with it.”

At the frontlines of the fight against misinformation in Metro Detroit’s Bangladeshi community is Iqbal Fardous, editor and publisher of Bangla Shangbad, a Michigan-based Bangla-language newspaper.

In the weeks since COVID-19 hit the United States, Fardous says he’s seen an uptick of misinformation spreading within the community’s social media groups. One regular topic of debate that Fardous has noted in interviews with international media sites involves the debate over how many Bangladeshis have died in the area from the disease. Nationwide, Fardous says that according to unverified information he’s seen shared on social media, at least 90 Bangladeshis were believed to have died from COVID-19 as of early April. He says it’s difficult to verify these deaths since data about demographics is incomplete.

Locally, another rumor that swirled on Facebook was over whether an employee at a local grocery store was infected, forcing the shop owner to try to defend the safety of their business.

“Stop spreading fake news by making sure the news is authentic before sharing, especially on social media,” says Fardous, who previously worked as a journalist and anchor for the Bangla station NTV Europe prior to moving to Michigan in 2015 from England.

In addition to giving interviews about the COVID-19 crisis in the United States and Michigan to numerous international Bangladeshi news stations like the Dhaka-based news station Ekkator TV, Fardous has collaborated with various local government agencies to disseminate informational fliers about the disease in Bangla.

Fardous says that aside from relying on unverified information on social media, the community lacks access to gather in real life, making it difficult to hear directly from others about what’s going on in the area.

“Now that people are not able to meet in the congregation, sharing that information is a bit difficult for people who don’t have access to social media,” he said.

Local leaders have begun to take notice of the lack of reliable critical information in immigrant communities and have taken steps to publish materials about the disease and accessing emergency resources in several languages.

As for Quayoum, she says she tries to strike a balance between staying informed and relying on her faith to cope with her mix of emotions about the future.

She turns to sources like Haute Hijab, a global hijab brand that publishes lifestyle stories catered to Muslim-American women. The site recently posted an Instagram Live featuring an interview with the site’s founder Melanie Elturk and Dr. Riham Alwan, an emergency care physician from San Francisco, who talked about precautions she takes for herself personally and professionally.

Quayoum also keeps her mom up to date with important information in Bangla, while her father tends to find out information on his own or from his son and son-in-laws.

“I try not to overwhelm my mom with news (and focus) more (on) information on protecting herself, facts she needs to know, and safety,” she says.

When it comes to Quayoum’s kids she finds it’s important to acknowledge her feelings about the pandemic.

“I try to be as honest with my kids as I can because I don’t think sugar-coating things will help them in the long run,” Quayoum says. I try to be hopeful and optimistic and tie in faith with it. I also try to tell them everything they’re feeling is normal and OK to feel boredom, sadness, anger, frustration, and that I feel it too.”

Note: Editing by Serena Maria Daniels, who is also a local news fellow with First Draft News, a global nonprofit that collaborates with local news outlets to share best practices for identifying mis and disinformation on social media.