Welcome back to our latest installment of the “Food in the time of Corona” storytelling series, personal essays written by Detroiters about how our relationship with the food world has dramatically changed during the pandemic.

This week, food justice organizer Shane Bernardo reflects on healing from colonialism in the midst of a global health crisis and unrest in the struggle for justice.

COVID-19 isn’t going away. Instead, the racial disparities around COVID-19 have been entrenched within the recent spree of killings of Armaud Arbery, Breonna Taylor, George Floyd, Tony McDade, and David McAtee. The prominence and timing of these racial justice and public health issues are not by accident. They’re both endemic of a system predicated upon white supremacy and enriching the world’s elite of mostly cis white men.

The message was loud and clear when President Trump pushed to reopen the economy despite the disproportionate amount of deaths, infections and hospitalizations among Black residents followed by him lauding heavily armed stay-home protests and bullying Gretchen Whitmer, Michigan’s governor by referring to her as “that woman from Michigan.” This anti-Black and misogynistic rhetoric by the nation’s standing president illustrates the long-standing relationship between white male entitlement and violence against Black people, women, and femmes within the foundation of this country.

One of the most enduring aspects of this violence could be characterized by how unstable and uncertain our relationship to food has become during this time period. In addition to contracting the virus from potential vectors, massive unemployment and confusion about federal aid, social distancing, and sheltering in place orders have surfaced a lot of fundamental questions around how we will feed ourselves and our families as we continue to fight for justice. No doubt, these impacts will have severe disparities for Black, Indigenous, and families of color as well. Of which, reveals our torrid history around food, land, and labor back to its colonial roots.

For many BIPOC communities, this question has persisted long before the coronavirus became a global pandemic. If we look at the course of history in what we refer to as the Americas, food insecurity has been a prevailing issue since 1492 and primarily for people kidnapped from their homelands along the West African coast and Native peoples of Turtle Island otherwise known as North America.

To understand more clearly how we overcome the fragility of our current food system, it must be placed within this historical framework that also includes a sober analysis around white supremacy, settler colonialism, western imperialism, and how they still persist. Today, our food system has become incredibly standardized, centralized, and industrialized. Much of which has taken its cues from the plantation economy designed to appropriate Native land and extract as much wealth from it and enslaved Native and Black people for profit.

From migrant laborers on large monoculture farms, meat processors to grocery delivery drivers and warehouse employees in the gig economy, vulnerable low wage workers have little recourse than to work long hours to compensate for not having proper protection, sick days or healthcare if they were to become hurt or infected in the process. All the while, shareholders and top executives reap record profits and salaries. Literally, exploitative labor practices have not changed.

Detroit isn’t free from critique either. As it applies to the urban farming movement within Detroit, a confederation of three Native Nations, the Anishinaabe (Potawatomi, Odawa and Ojibwe) grew, foraged, fished, and hunted ages before the city was established. In a historical context, what is new is the formation of colonial settlements. Not having a relationship with the earth.

Detroit is now being billed as the “arsenal of health” despite how the mass water shutoffs and mass incarceration continues to aid in the spread of the coronavirus in a Black majority city. What does that actually mean for those of us whose ancestors are still dealing with the legacy and trauma of being colonized and oppressed? 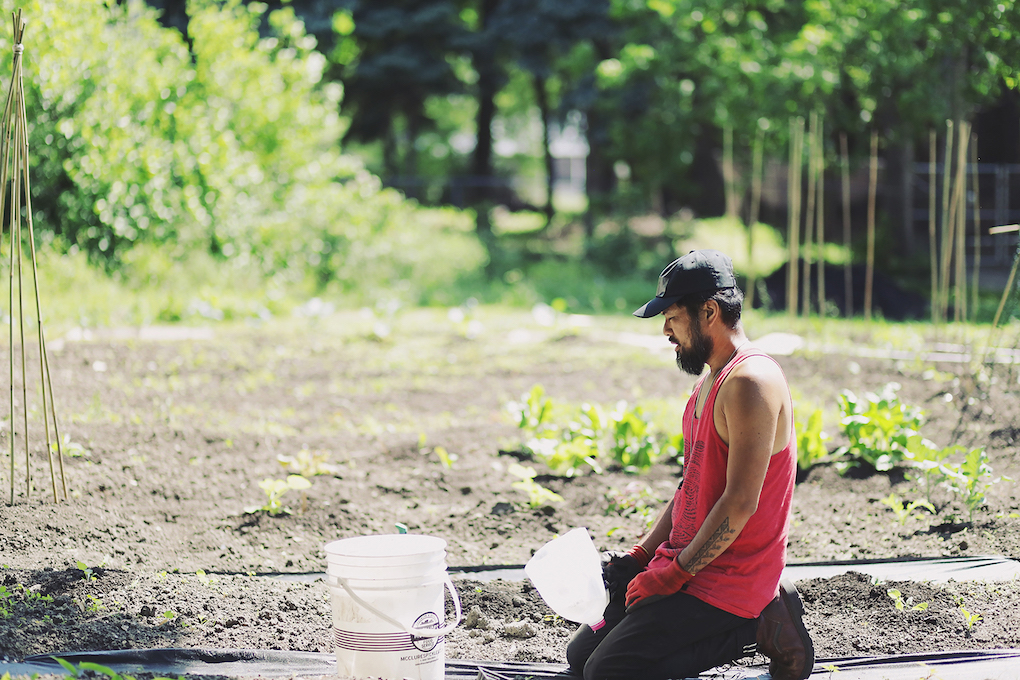 Surely, growing our own food is part of the answer. Taking destiny into your own hands is always a good idea. Community farms and gardens are not without their own issues though. For example, there’s a renewed interest in “victory gardens,” which began during World World I and resurfaced with popularity around World War II. These well-intended notions, however, often conveniently dismiss the history around Japanese internment camps. Much of those interned were farmers themselves!

Recalling all this trauma and tragedy doesn’t mean our origin stories begin there, however. In rewriting a new narrative, we must be cautious against the danger of recreating the colonial violence of the industrial food system. The solution is that we have to think more broadly and creatively than simply creating the opposite of what we don’t want.

To be more explicit, all the urban farms and the enticing produce are byproducts of our relationships with one another and the soil. Our healing and sense of wholeness come from divesting from capitalist notions that treat land and labor as commodities and building upon a movement that centers mutual aid, collaboration, and shared risk and autonomy.

Today, I am now helping soup kitchens, food pantries, and food banks that organize themselves and their communities to address and heal from the root causes of chronic hunger, poverty, and structural anti-Black racism. This work is very personal to me. Over the course of my father’s lifetime, I witnessed how being displaced into the Philippine diaspora led to his untimely death due to chronic health disease. Within the journey of navigating the immense grief, there was this clear connection between ancestral land loss and being able to maintain one’s sense of self, spirit, and belonging.

For me and my family, this journey started long before my job as a food justice organizer. My journey’s memory extends long into my ancestral connection to the land and how my people and family cultivated this relationship since forever. Reclaiming this connection is more than survival. It’s quite literally an act of resistance. 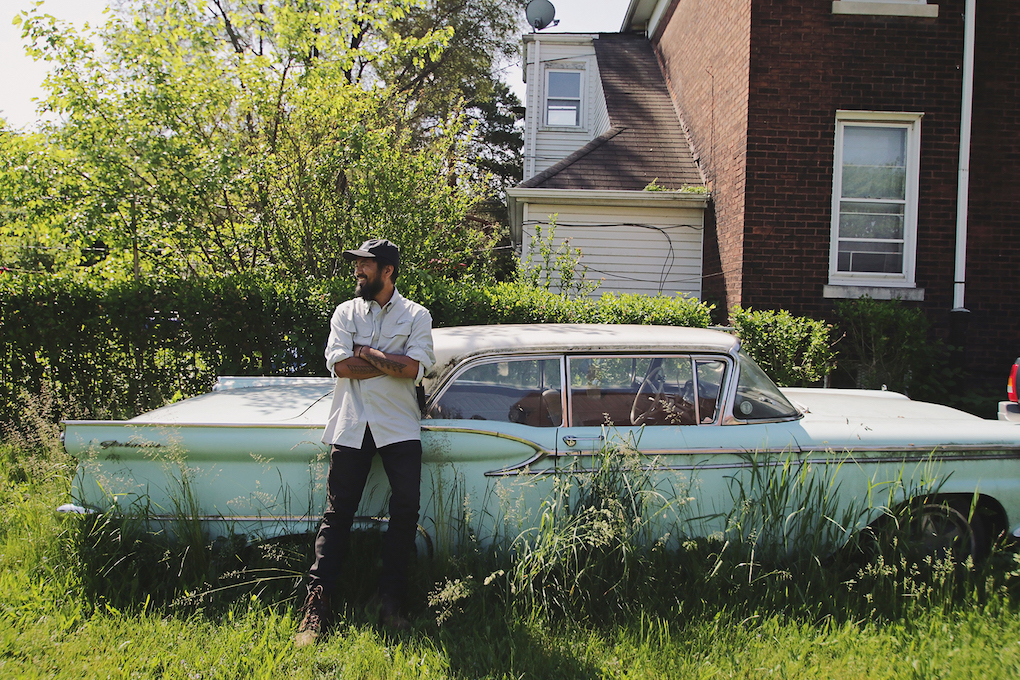 Teachings that come from reclaiming my relationship with ancestral lands is a long protracted journey into healing myself and my ancestors. It’s not a “job.” It’s my responsibility as I step into the role my father had as a culture keeper before he transitioned to ancestorhood.

In the process of healing, it’s abundantly clear that this is not a purely intellectual practice. We cannot simply reason ourselves out of generational trauma. We must break open and see how our insides also mirror the colonial destruction that continues to lay before us.

Healing is when we stop conceding that colonialism only happened in the past. As long as we suffer from chronic poverty, hunger, structural racism, and generational trauma, we are still being subjugated.

The scale of the COVID pandemic, food insecurity, and white supremacy can only be matched by the amount of anxiety they have sustained in its wake. What’s being made invisible by the numerous media accounts of workers being forced to work sick, panic buying, unstable supply chains and farmers letting food rot in the fields is how the industrial food system also perpetuates the emotional and psychic violence that is better understood within the context of colonial settlement of the Americas.

There is a pervasive reality for those of us who suffer from chronic anxiety that often goes largely undiagnosed or misdiagnosed because of how everyday life systematically subjugates BIPOC folks’ ability to be whole people. In addition to the structural conditions that normalize scarcity and violence, compounded intergenerational trauma poses yet another front to fight and heal from. Our ability to do so is deeply tied to our connection to the earth. As we have become more and more reliant on the industrial food system, our ability to maintain our mental health also wanes. The correlation between our overall health and our growing dependence on a system that perpetuates violence is more clear than ever.

To quote water warrior, a founding member of Detroit Black Community Food Security Network and Detroit ancestor, Charity Hicks, “social change happens from the ground up and from the inside out.” This message rings loud and clear as Detroit, a majority Black city, and its residents continue to navigate massive disinvestment, displacement, and economic upheaval spanning decades. Of which, has culminated into huge windfalls for Detroit’s elite where Dan Gilbert, the billionaire owner of Quicken Loans, a mortgage lender is building a $533 million “criminal justice” center that will house the new county jail or the Illitch family’s newly constructed hockey arena with $324 million in public funds that were used to detain protestors during this past week’s #BlackLivesMatter protests.

This historical context is important for understanding where we are today and how we got here. When Charity was wrongly arrested for intervening in her neighbor’s water being shut off, she saw the sacred connection between our water and our rage and encouraged us to “Wage Love”.

“This is about waging love; we love ourselves, we love our children, we love the earth, we love all of life. So this is not a protest. This is actually an act of waging love. The love we are talking about is the love of life not the love of death,”  Hicks says.

Few people knew this better than Ron Scott, founder of “Peace Zones for Life” and the Detroit chapter of the Black Panthers and another #Detroit ancestor. Ron knew that police occupation would only lead to further escalation and sought to use transformative justice to transmute pain and grief into a common struggle for peace. He knew intimately well how elusive peace was and how hard you had to fight for it and that sometimes that meant fighting our inner demons. Ron would also share that “Once the work becomes about you, it dies,.” commenting how stark individualism, a tenant of white supremacy and anti-Black racism severely underdeveloped our sense of community and shared struggle. Ron modeled this when he advocated for justice for Malice Green, Reneisha McBride, Aiyana Jones, Vincent Chin, and Chonburi Xiong, who all died in extrajudicial killings in Detroit and nearby sundown towns, Dearborn Heights and Warren.

As the proverbial canary in the coalmine, Detroit has a head start as our infamous rebellion happened in 1967 and has since continued to fuel the legacy of solidarity movements here as we reimagine a future to “grow our souls” and “become more human beings” as long time activists couple and co-founders of the Detroit-based Boggs Center, James and Grace Lee Boggs would often say. These voices in particular show us the way to a future that moves from solidarity to co-liberation between Black, Indigenous, and non-Black POC and illustrates how our liberation is literally intertwined with one another.

Want to be featured in this storytelling series? Contact us at info@tostadamagazine.com.

Shane Bernardo is a co-founder of Food As Healing, a social movement to center ancestral, Earth-based traditions that are critical for maintaining our identities, sense of belonging, health, and wholeness. Shane is also a grower, anti-oppression facilitator, storyteller, and food justice organizer based in Detroit, Michigan that uses food and the stories embedded within them as mediums for healing and decolonizing.