Garnet Terri never set out to become a baker. She didn’t even know how to bake – or so she thought.

Turns out, it would be her mother’s signature carrot cake that she had perfected as a part-time home baker for the past 40 or so years, that would kickstart her journey as the owner of Terri’s Cakes.

As the owner of Terri’s Cakes, Terri’s customers rave over fun and creative flavors like apple, banana pudding, and peach dream — a pound cake with swirls of cheesecake folded in topped with a baked cognac-drenched peach cobbler. Her cakes are made to order, and a lot of flavors are inspired by her customers. Her creations are so popular, in fact, that if you try ordering online Terri’s is currently booked through the end of July.

Of course, the success could easily be attributed to mom’s famous carrot cake, a fan favorite.

Growing up, Terri never actually got involved in her mother’s baking venture,  but she did subconsciously pick things up. The two would spend hours talking in the kitchen, while mom prepared cakes for parties and events.

About six years ago, Terri’s mother was getting ready to retire from baking but received a call from someone requesting a carrot cake. Her mom passed the job to her daughter. Those conversations in the kitchen between mother and daughter all those years had rubbed off on Terri, who, even though she hadn’t really baked before, had soaked in the family recipe into memory.

Two months later, the mother-daughter team filled more than 150 orders. It was that moment when Terri decided that baking was something to pursue further, and Terri’s Cakes Detroit was officially established in January 2014.

Even though Terri wanted to be an entrepreneur, initially breaking into the food industry seemed like a risky choice.

“Food is a very hard business and I wasn’t interested in purposely starting in the hardest business possible,” she says. “But I did stumble upon it and I love it now.”

Terri says her growth as an entrepreneur isn’t unique from others. She’s dealt with balancing a 9-to-5 twice while growing the business. She’s experienced the pains of finding an appropriate kitchen space, first starting out baking in a one-bedroom apartment, with a kitchen that she says was no more than 200 square feet. She’s tried working out of a church kitchen in the city’s Arts District and a restaurant kitchen in the Jefferson Chalmers neighborhood. Both were terrible. 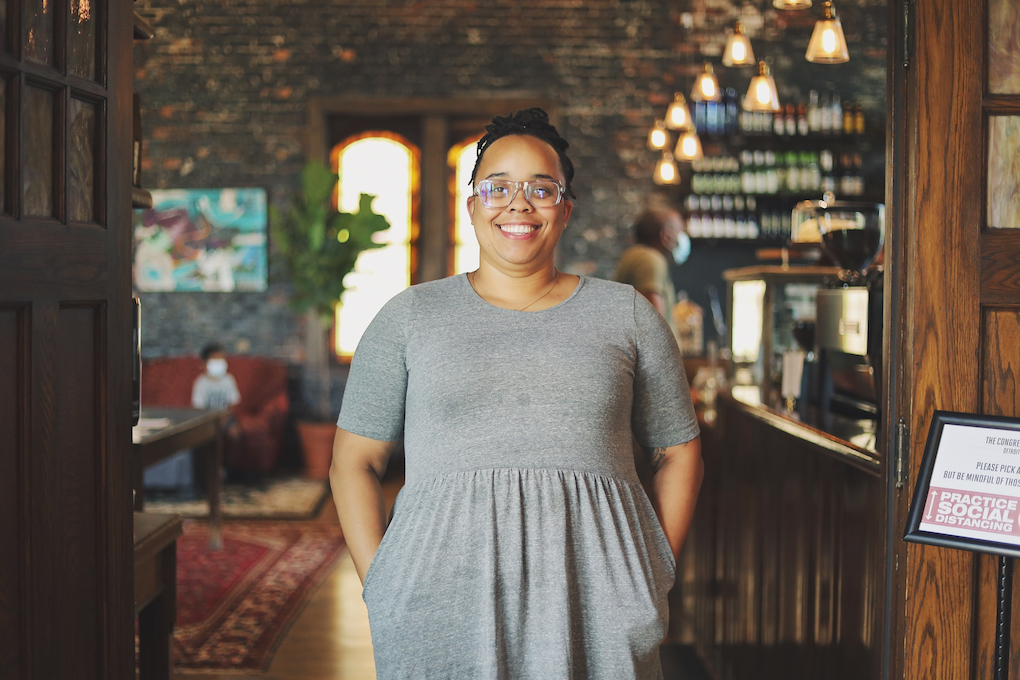 “There aren’t enough kitchens for the amount of food entrepreneurs that exist in our city,” Terri says. “So that was an obstacle – finding a space that was affordable [and] reasonably priced where it was in proximity to clientele.”

She eventually found a kitchen in Midtown giving her close proximity to corporate clients like Quicken Loans and the Tigers.

Two years ago, Terri found what will become Terri’s Cakes’ permanent home at 16311 East Warren in the Morningside area. The brick and mortar is expected to undergo a major renovation to include a storefront with a dessert bar and event space and is tentatively scheduled to open to the public later this year.

For Terri, building a business wasn’t what she found particularly challenging. The biggest challenge was in her personal life when she went through a divorce.

“You have to keep up this facade that life was great and it was not,” she recalls. “For me, I never wanted to do [entrepreneurship] by myself. Even though I don’t have a literal partner, having a life partner was my partnership through the struggles of entrepreneurship.”

The latest curveball came in March when COVID-19 led Terri to close for three weeks, mostly because she was terrified of getting sick and did not want to get her staff sick.

It was Terri’s customers that changed her mind, and she reopened. With large-scale corporate clients out of the picture for the foreseeable future, she tweaked her business model –  instead focusing on smaller events like baby showers. She’s also trimmed down some Terri’s flavor offerings and only kept the most requested ones.

“After we reopened, we saw an insane spike in business and we’ve been busier than we’ve ever been before,” she says.

The pandemic also presented an opportunity for Terri to provide desserts for the Pay It Forward initiative to feed people experiencing homelessness and at-risk girls. The project, launched in response to the urgent food needs during the pandemic was line with Terri’s desire to give back to the community. Long term, she intends on providing Detroit youth with educational opportunities if they work at Terri’s. She established a foundation through the company so that when her storefront opens, she will employ high school students from Detroit public schools to work at the bakery. In addition to their hourly wages, they will be paid by way of a trust. When the students graduate, they can use the trust fund to continue their education. If they choose not to continue their education, the trust funds will be released when they turn 25.

“I’m big on community involvement,” Terri says. “When I thought about becoming an entrepreneur, I thought, how can I give back to the community other than just writing checks?”