It’s a typical work day for the “Babes Babes Babes” at the Bon Bon Bon chocolate factory in Hamtramck. Each babe (as the mostly female staff affectionately calls each other) is assigned a specific station: shells, ganache, toppings, sales, research and development.

Well, that last one is more of an organic process, shared between all the babes, in preparation for each season’s next collection of revelatory bons.

Adwity Borna works the shell station, where she melts down quarter-sized nibs of dark, milk or white chocolate and pours the molten mixture into molds to make the shop’s famous bite-sized boxes that are later filled with whimsical ganache concoctions. On this particular day, she takes a break and pulls out a container of homemade pickle and apples traditional to her native Bangladesh and passes it around for the others to sample.

As the women share the sweet, tart snack around, an idea enters Borna’s head: What if we could capture this in bon-form? 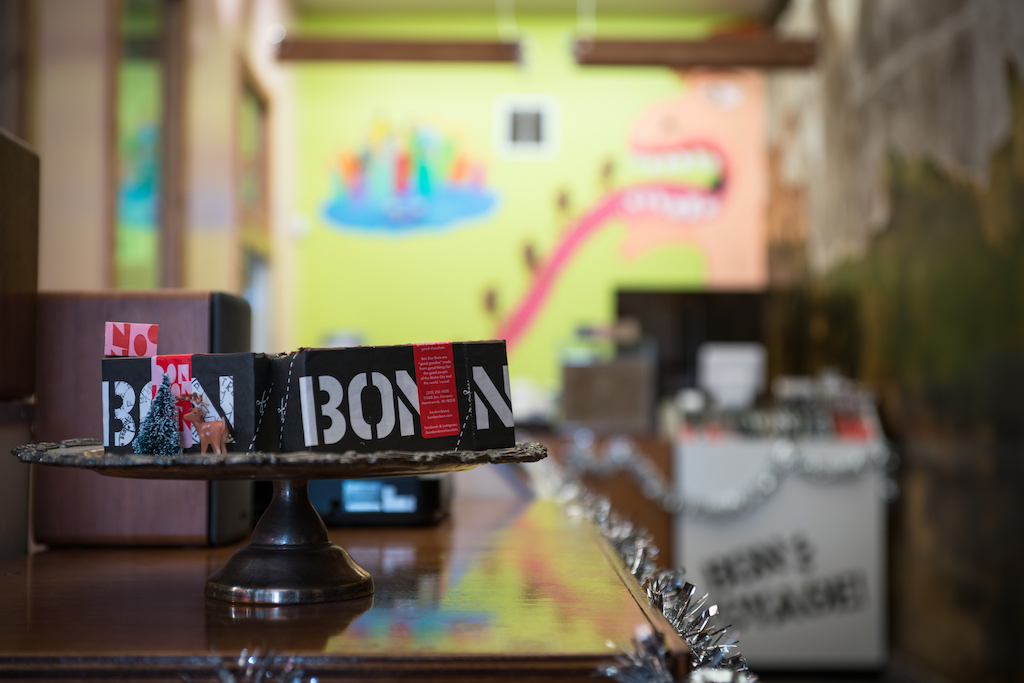 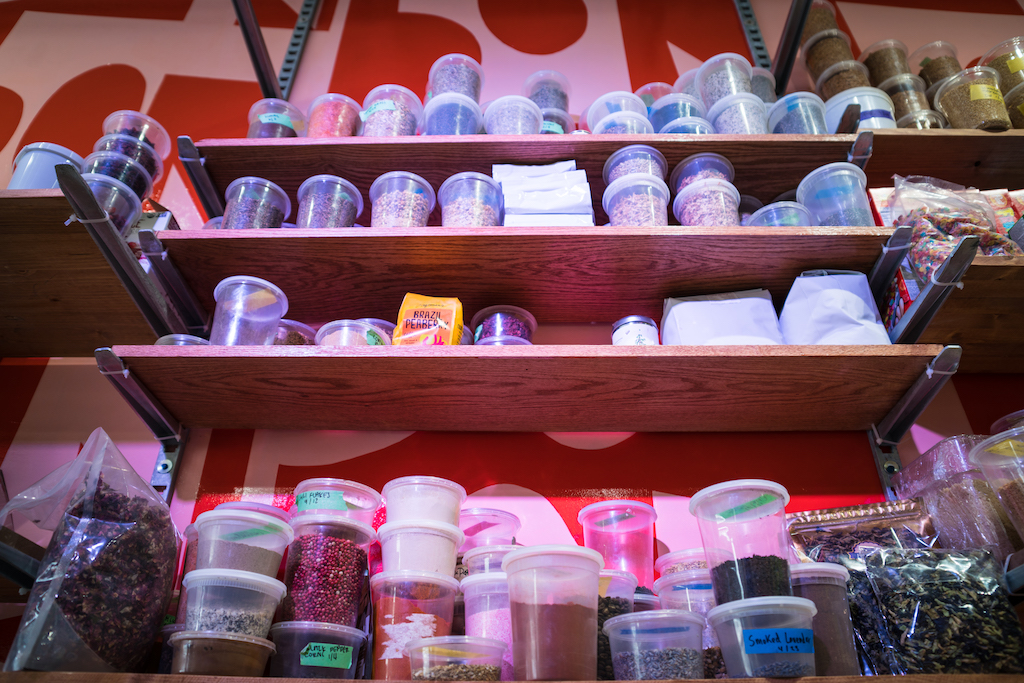 Not that it’ll work out. The flavor combination of tomato pickles and chocolate has to be tweaked and tested. After all, it doesn’t matter if the idea sounds cool, it matters how it translates once it goes out to the sales floor and into the mouths of customers.

But that’s not really the point. No, really it’s this juxtaposition of traditional chocolate-making against Metro Detroit’s multicultural tapestry that has put Bon Bon Bon on the map for inventive bon-innovation. In other words, ideas are always welcome to elevate these handheld treats to the next level of deliciousness. 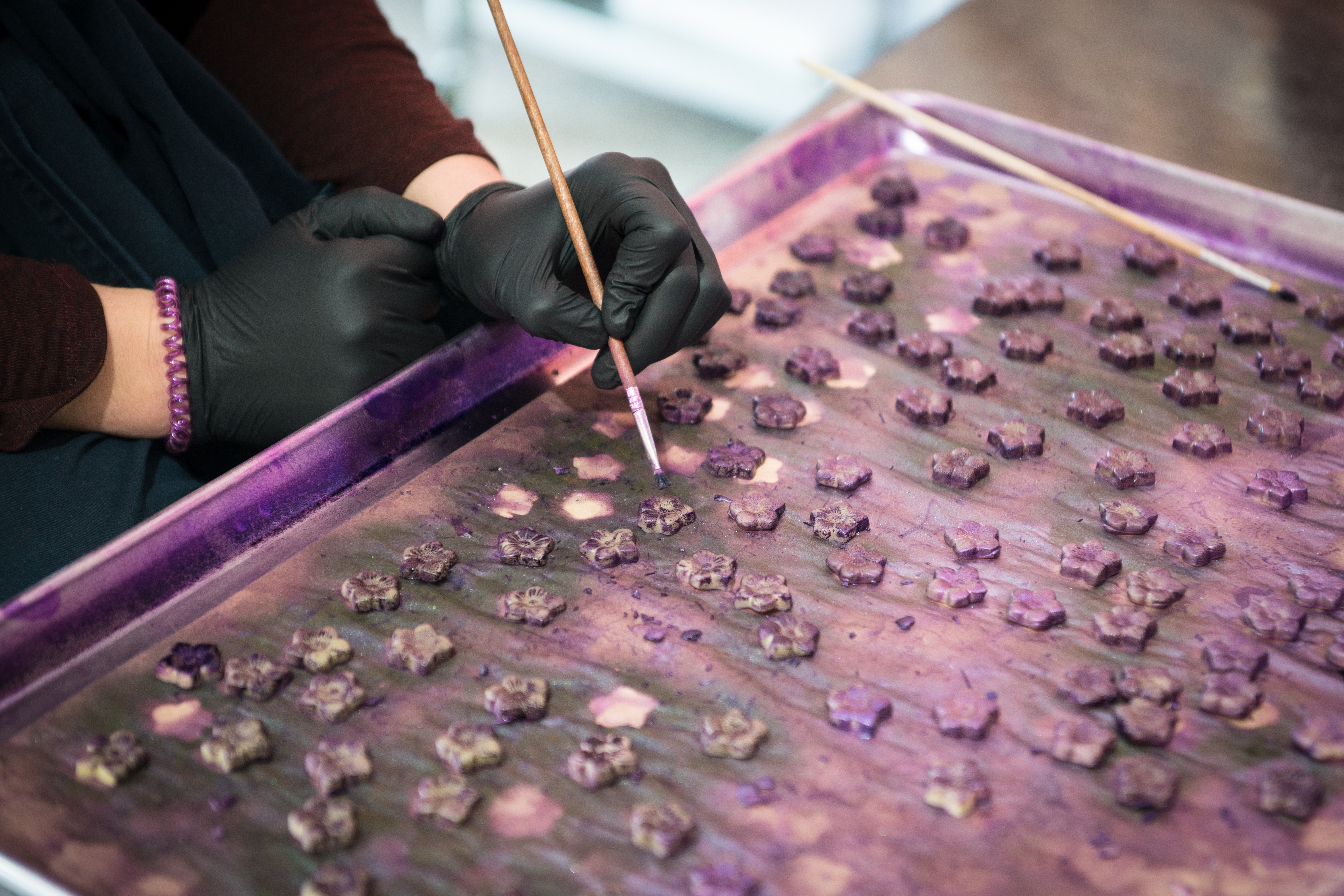 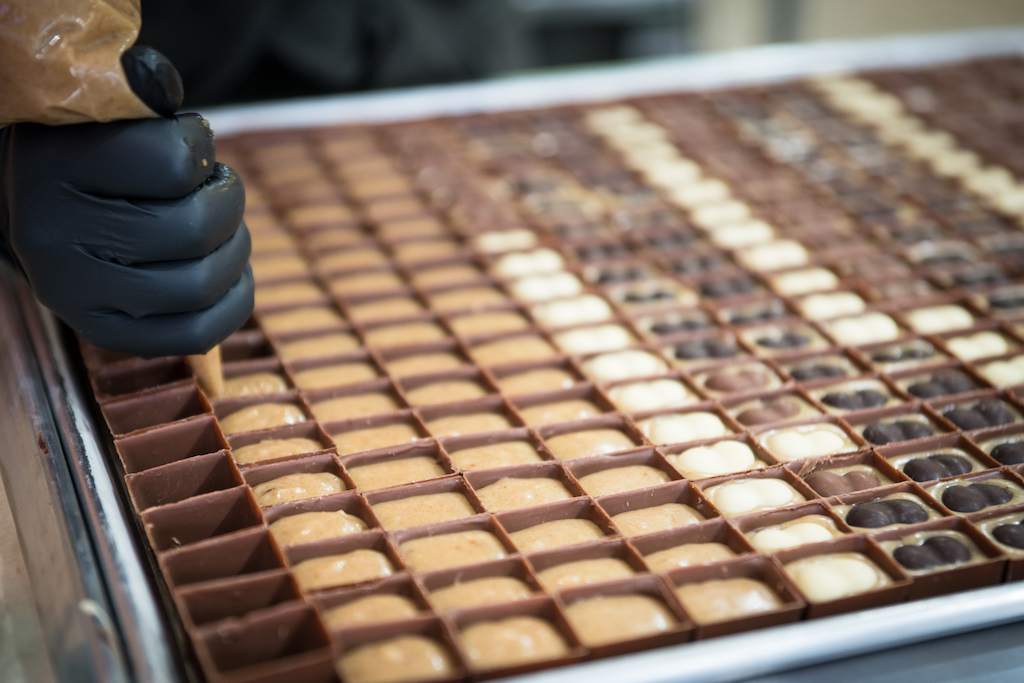 Since opening in a tiny shop behind a Coney Island in 2014, Bon Bon Bon has quickly ascended as one of the most celebrated chocolate shops in the region, in no small part because of the diverse perspectives that each babe brings to the mix. Few, in fact, have ever worked in a commercial kitchen prior to getting fitted for one of the shop’s now iconic coveralls. Some come with experience working the automotive line. Others, like Borna, are part of Hamtramck’s sizable immigrant diaspora made of Bengalis, Yemenis, Eastern Europeans and Syrians. What binds the team together is a shared curiosity.

Bon Bon Bon’s classic “collection” sweets punctuates this ethos of celebrating the region’s diversity, with plenty of Detroit-centric references. There’s the Better Butter Crunch (an ode to the city’s love affair w Better Made chips), the Polish-inspired paczki bon with fried donut ganache and another sweet inspired by the guys who favored Arabic coffee during breaks at the Detroit Athletic Club, where founder Alexandra Clark.

This Valentines season, the babes unveiled their latest collection of sassy creation that includes the “Bitter Bitch” (with black currant confiture and preserved lemon ganache), the “You’re Not Even That Hot” (with Spanish paprika chips and Flamin’ Hot Cheetos) and the “Honey Buns” (with honey caramel and honey bun ganache). 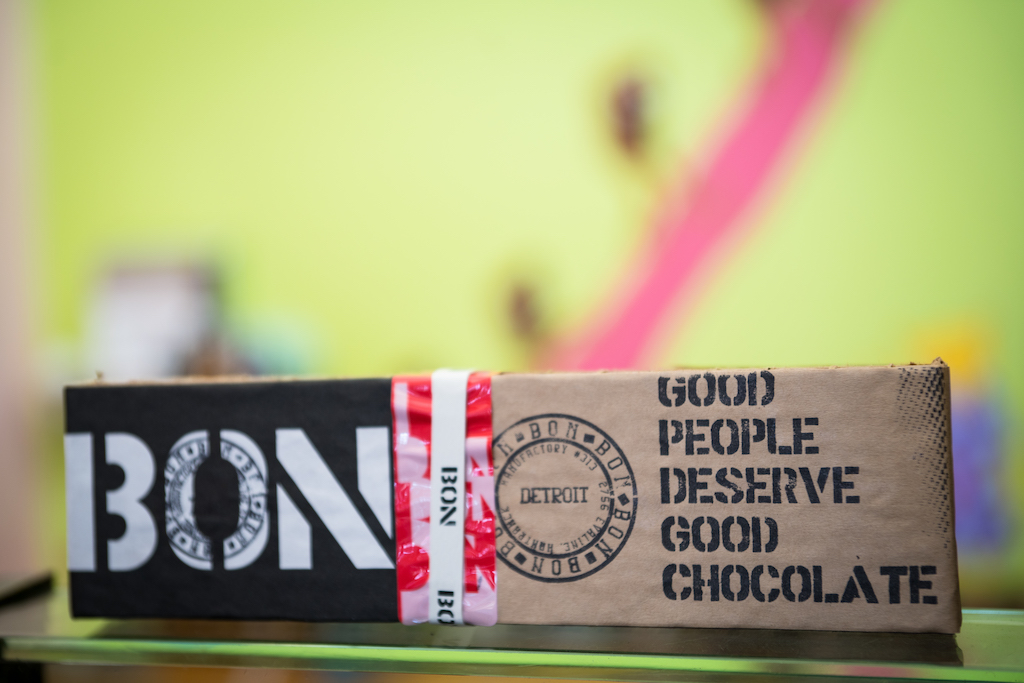 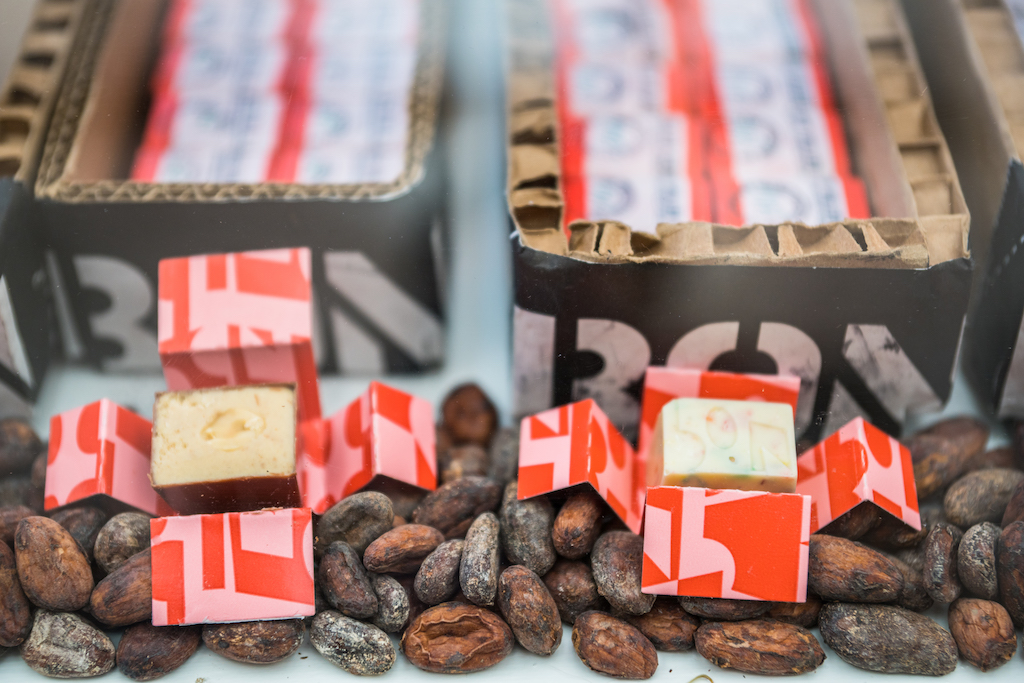 Borna, who applied for asylum in the United States from the Bangla capital of Dhaka with her daughter a few years ago, catches glimpses of the familiar in the array of bon bons. She points to the “Hot Mama,” for example, which utilizes dried mango and cayenne pepper (which, if you grew up in a Latin American neighborhood, also sounds reminiscent of the street vendors who sell mangos con chile). And aside from the pickle apples, she’d like to see a traditional rice pudding bon on the lineup someday.

Outside of these subtle similarities in ingredients, Borna tells Tostada during a brief pause during Valentine’s Day preparations that she hadn’t had any experience in a professional kitchen setting before she applied for the job. Back home, she had worked in radio as a vocal artist.

While a recording contract might not be in her immediate future, Borna says she gets her creativity flowing when she and the other babes are busy at work developing

says she’s inspired by how her own experiences with food can lend themselves to the creative process.

“When I had this opportunity, it was really huge for me because everything’s artistic here,” Borna says. “I love art, any kind of art, so when I saw this, it was kind of an awesome place for me. I mean, I used to tell people when when people have bon, they not only having chocolate, they are having a piece of art.”

Bon Bon Bon is in two locations, 11360 Joseph Campau Ave. in Hamtramck and inside The Chrysler House at 719 Griswold, Suite 100 in Detroit. For more information, click here.

(All photos by Rizwan Lokhandwala. Check out more of his work on camera on Instagram @naaksaafkur)