The first time I realized that I was an imposter Mexican was over a bowl of menudo.

My sister and I were born in Portland, Ore. but we moved around all over the Pacific Northwest. A lot. Every time my mom earned another degree, off we went to a new school, a new neighborhood and new home. We eventually settled in Mission Hills, Calif., a lower-middle-class area on the outskirts of the northeast San Fernando Valley.

My freshman year, I wound up at my mom’s alma mater, San Fernando High School, home of Ritchie Valens and the Mighty Tigers. In middle school in lily-white Portland, I was one of maybe three Mexican kids on campus. Now in the middle of Latino Los Angeles, I would witness an elotero for the first time, standing on the corner, waiting to coat ears of corn in mayo, parmesan, and chili powder to hand out to kids as they got out of school. I would try my first raspado, like a snow cone but better, made directly from a giant block of ice and drenched in whatever syrup flavor you could imagine. And it would be the first time I would thrill in the sweet and spicy sensation of a Vero mango lollipop.

It would also be the first time that Wonder Bread, Coconut (brown on the outside, but white on the inside) or güerita — white girl — would become familiar nicknames.

It happened when some new girlfriends of mine invited me over after school to hang out. We went to this girl Lala’s house, where her mom was making menudo. As we each waited for a bowl, the sound of telenovelas in the background, the girls walked me through the “right” way to dress it up, after all, this was my first time trying it. A few squeezes of limón, they showed me, a sprinkling of shredded cabbage and diced onions and, of course, a spoonful of chile to taste.

Between spoonfuls and bits of gossip, Lala and another friend Betty went on to compare whose mom made the best chile. Ignorantly, I boasted about my mom’s chili con carne, an homage to her Tex-Mex roots. The girls shot each other an amused look. No, no, not the brown kind, the red kind, they snickered.

It’s OK, Lala said, it’s not your fault you were raised a Wonder Bread. That’s when it dawned on me for the first time in my 14 years of life; I was an imposter Mexican.

And so began a years-long struggle to fit in with the only identity that I had ever known, that all of a sudden felt hopelessly foreign to me.

I plucked (and shaved!) my bushy Frida unibrow to oblivion. I was already using the mochaccino-colored lipstick (I think that was more of a 90s girl thing) but now I added a chola touch by drawing on exaggerated cocoa outlines around my thin pout with Wet ‘n Wild liner from the 99 Cent Store. I read Pablo Neruda poems out loud — taking care to emphasize the trill of the r’s in “amor” in each verse. My mom’s old Los Lobos CD’s were on heavy rotation and I stole her paperback copy of Mierda, a book of Spanish cuss words and dirty limericks. Anything to avoid just one more of those stinging eye rolls.

I hit the jackpot in Latinidad cred my junior year of college. I met this guy who I worked part-time with at a call center in Chatsworth. He was a real-life chilango, a Mexican from Mexico City, AKA D.F. As in, can’t get much more Mexican than that. He introduced me to his family right away, and before long at all, he did what all good hijos do: gushed over his mom’s cooking.

Ironically, the first time I would realize that there was nothing imposter Mexican about me was over a plate of her tacos.

By then, I learned to play off the self-deprecating white-washed Mexican role off all too well. My mom does the hard shell tacos with ground beef, I’d laugh. Yeah, yeah, I know, not the real thing, but hey, we were deprived of any culture having lived in white bread Portland. I was looking forward to his mama’s tacos. She would show me how it’s really done, I just knew it.

The big night came when I came over and started helping his mom in the kitchen. A few things were noticeably missing though. Where was the carne asada? Or the carnitas? What happened to those tiny corn tortillas? And no wedges of limón or cilantro either? No, no none of that. In fact, there was something eerily familiar about her recipe. 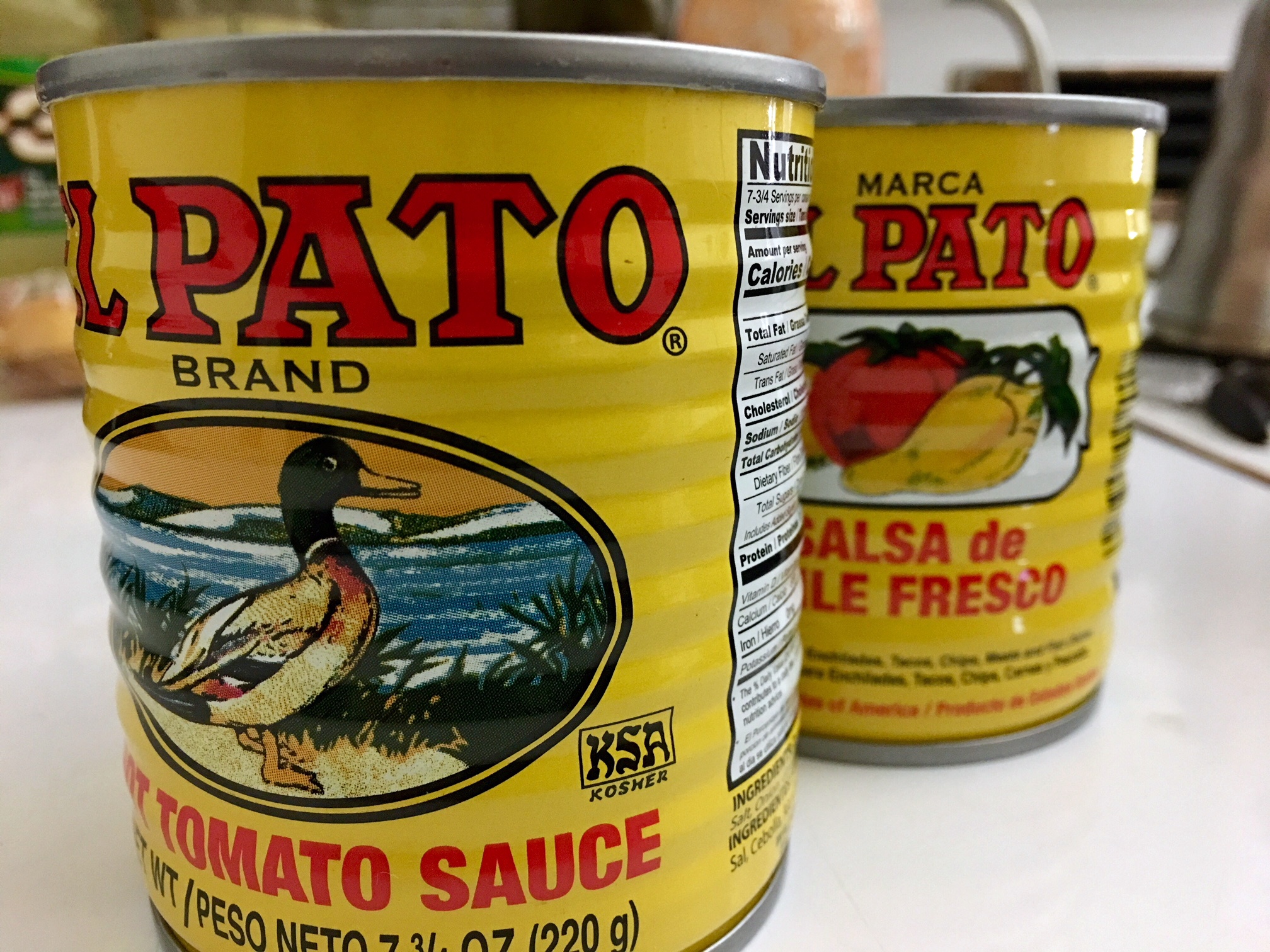 The secret is the El Pato sauce, she said with a smile, before dumping the contents of the little yellow duck can into a skillet of simmering ground beef…? And frozen vegetable medley… Wait, what? Is this right? Then came the tortillas. Nope, no corn here. Instead, they were flour, which she folded over and melted mozzarella inside like a quesadilla. Then she filled these quesadilla-looking things with her ground beef mixture and topped it with lettuce.

Once everything was in place, she added the final touch: a couple of ribbons of… Ketchup?!

Before I got the chance to call into question everything about this abomination, the boyfriend, and his three siblings were already scarfing their’s down with a quickness. They immediately got up and made second and then third helpings, grinning ear-to-ear, saying, isn’t this is the best?

And I had to admit it: it was delicious. It had many of the qualities that a good taco incorporates: a mixture of textures and flavors, such as with the meltiness of the cheese and the spicy kick of the Pato-infused ground beef. The crunch one might expect from diced onions and cilantro instead came from the lettuce. And the ketchup? Well, it tempered the heat from the Pato sauce perfectly. Taco Bell has for years been marketing this very concept to the delight of stoners everywhere. And like the Fourth Meal headquarters, these tacos with ketchup could feed a very large, very hungry family on very little dough.

After that revelatory meal, I would go on to notice others like it that after all these years had floated right under my radar. Like the taquito dogs I noticed on a menu at J & S in Montebello that my sorority sister and I drove to one afternoon. Literally just wieners wrapped in crispy corn tortilla shells that are dipped in guacamole. My mom used to make something like this when we were little, something of a compromise if we wanted a hot dog, but ran out of buns. 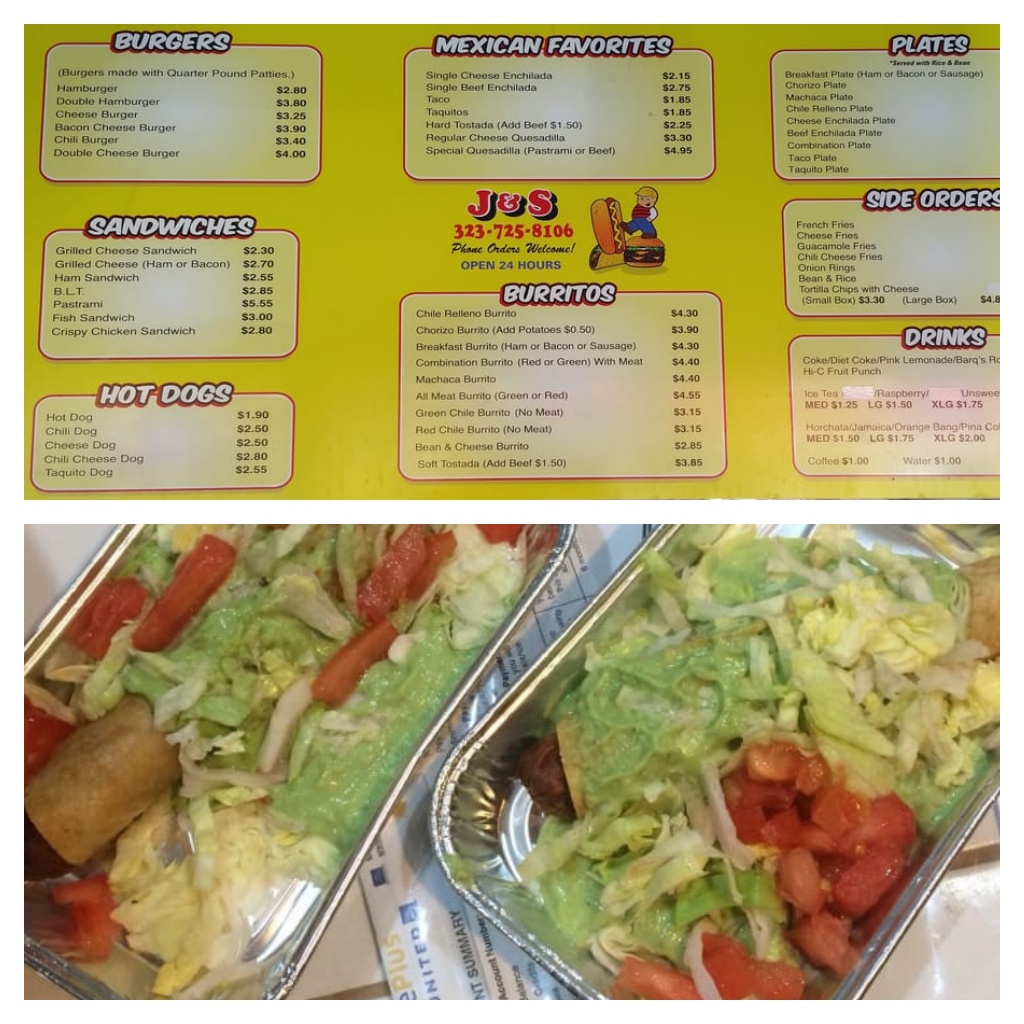 A couple of years later, I was in San Antonio during the city’s annual Fiesta celebration when I came across a food stand, where the proprietors made flour tortillas on the spot. These weren’t your sad, flat blankets used to hold chimichangas. No, they were thick, pillowy discs, made all the more mouth-watering when spread with melted butter all over them. Wait a minute, I thought, as I stood in line for one. I’ve seen these at Carrillo’s bakery in San Fernando. Most recently, a friend of mine wrote this illuminating essay in Eater that dove into border cuisine. It hit me that many of the dishes he described — the hard shell taquitos, cheesy enchiladas, and beef tacos — were exactly what mom makes, dispelling any doubt about my authentic Mexican-ness.

I still make tacos with ketchup, especially when my freelance invoices are past due and I’m scraping by on a Bridge Card budget. Sometimes I’ll mix it up and use ground turkey, maybe add a little sautéed kale into the filling. Most recently, I grilled up some fatty chicken thighs and shredded ’em up for a little pulled chicken action.

And I’m reminded what millions of halfies and first-generation kids like me have to contend with every day, trying to navigate in a bicultural world: that sometimes you make do with what’s available, throwing in a few ingredients here and there that remind you of whatever “home” means to you.