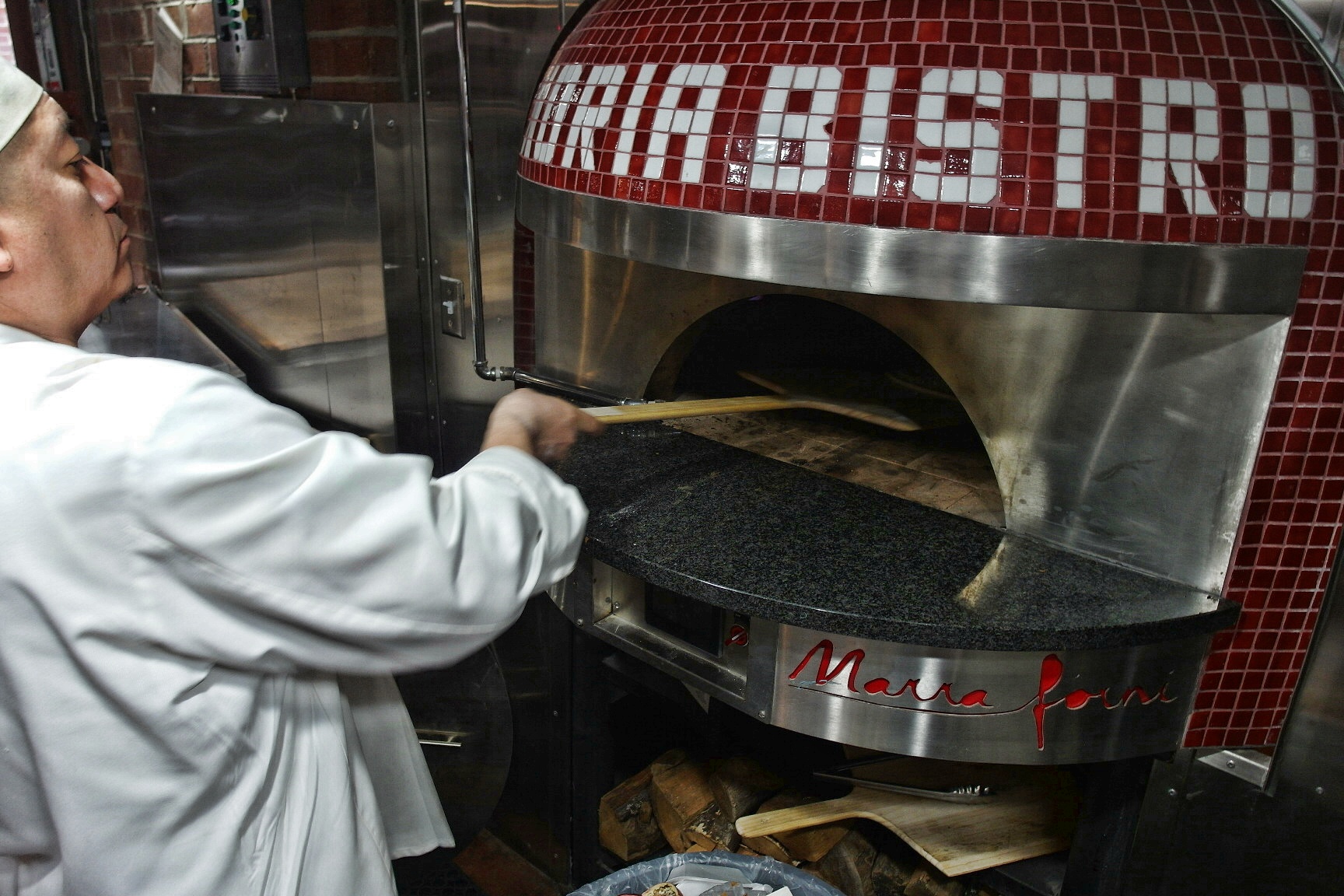 Growing up in a rural part of the state of Puebla in central Mexico, Norberto Garita says chapulines (grasshoppers) were a favorite treat for him after a hard day of working the farm. Chapulines are often dried and toasted and flavored with lime juice, garlic and sometimes chile, making for a protein-rich, low-fat crunchy snack, not unlike a bowl of dried shrimp.

He’s long since immigrated to the United States, starting with a stretch working in New York City restaurants, before making the move to Detroit, where he’s run the popular El Barzon Mexican-Italian eatery for more than a decade.

Starting this week, Garita brings his culinary journey full-circle when he and his family unveiled their long-anticipated casual sister spot, La Noria, at 5517 Michigan Ave. (the Spanish word noria refers to a water wheel). 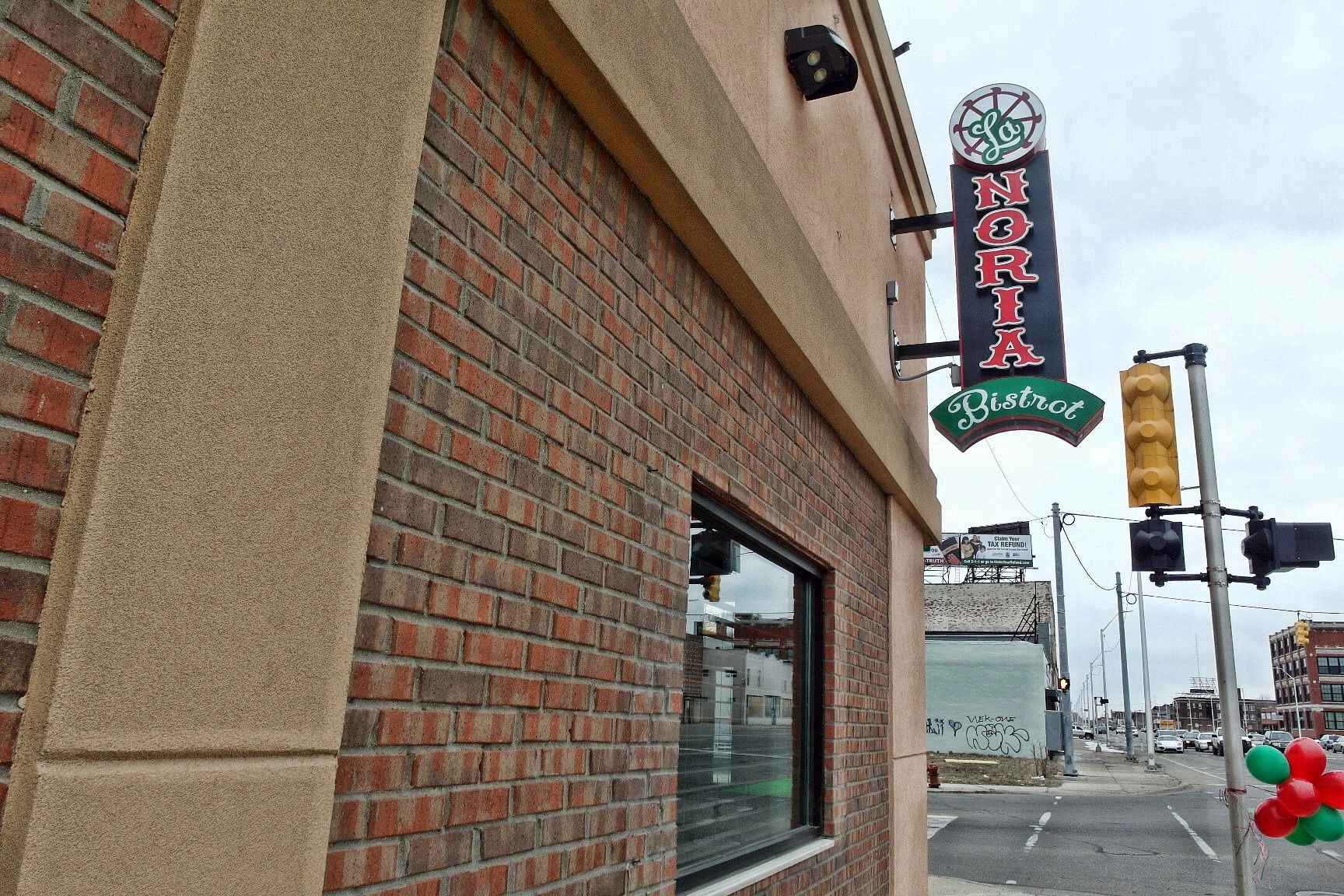 Similar to El Barzon’s concept, the menu at La Noria draws from both Garita’s Mexican roots and his many years working in a high-end Italian restaurant in the suburbs. The difference here is, while El Barzon carries two distinct menus — one rich in Mexican specialties like Garita’s mole poblano and the other emphasizing pastas and other Italian dishes — La Noria marries the two together in a whole new way.

We stopped in on opening day and found an emphasis on several dishes that pay homage to Garita’s home state. While there’s a decent-sized section of the familiar torta sandwich offerings on the menu, there’s also its cousin from Puebla, the cemita Poblana. Instead of using a bolillo roll, the cemita calls for a massive sesame seed bun. Instead of mayo, there’s a smear of avocado spread across the bread. For cheese, a layer of queso Oaxaca. Diners choose from a variety of proteins served milanesa-style (in other words, breaded and fried). A final touch of pápalo, a traditional Mexican herb that Garita describes as similar to arugula, adds a slight kick.

Typical chicken and beef are available, but so too are tacos árabes, which are distinct to Puebla and speak to the centuries-long connection between Middle Eastern and Mexican food. Around Detroit, most of us are accustomed to tacos al pastor, which utilizes a spit, like the Lebanese shawarma to roast the marinated pork. Tacos árabes also use flavorful slices of pork from the trompo that’s then usually stuffed in a pita-like bread. At La Noria, a flour tortilla is the vessel of choice.

Salads are available in both Mexican and Italian-style, as are several entrees. Where you see the two styles fuse together is in the pizza section. Garita invested nearly $20,000 in a pizza oven imported from Italy, helping to give the crust a nice crunch. But in addition to Italian standbys like a Margherita pizza, Garita turns to Puebla for inspiration, as in with a mole pizza that replaces tomato sauce with his famous mole poblano sauce. 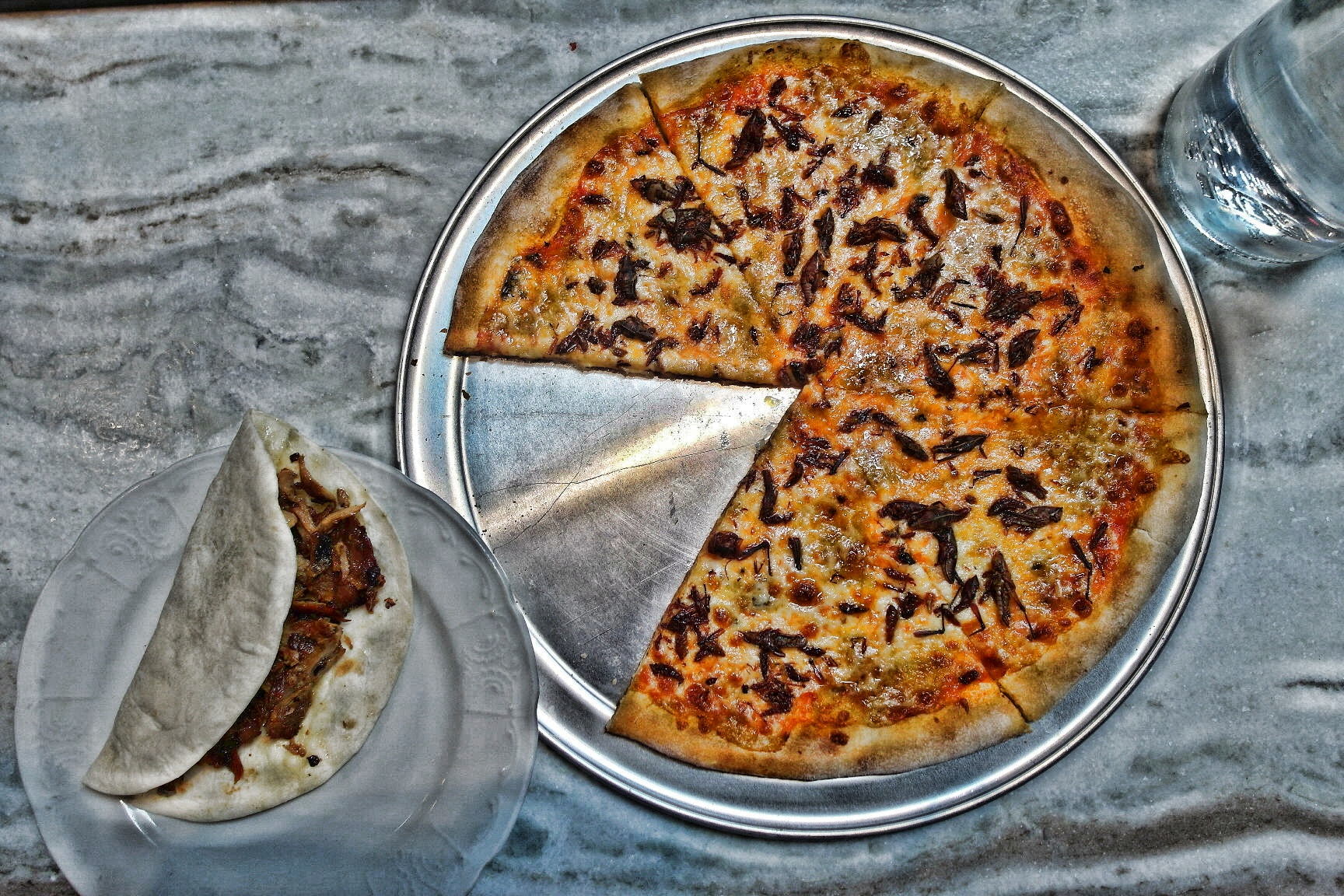 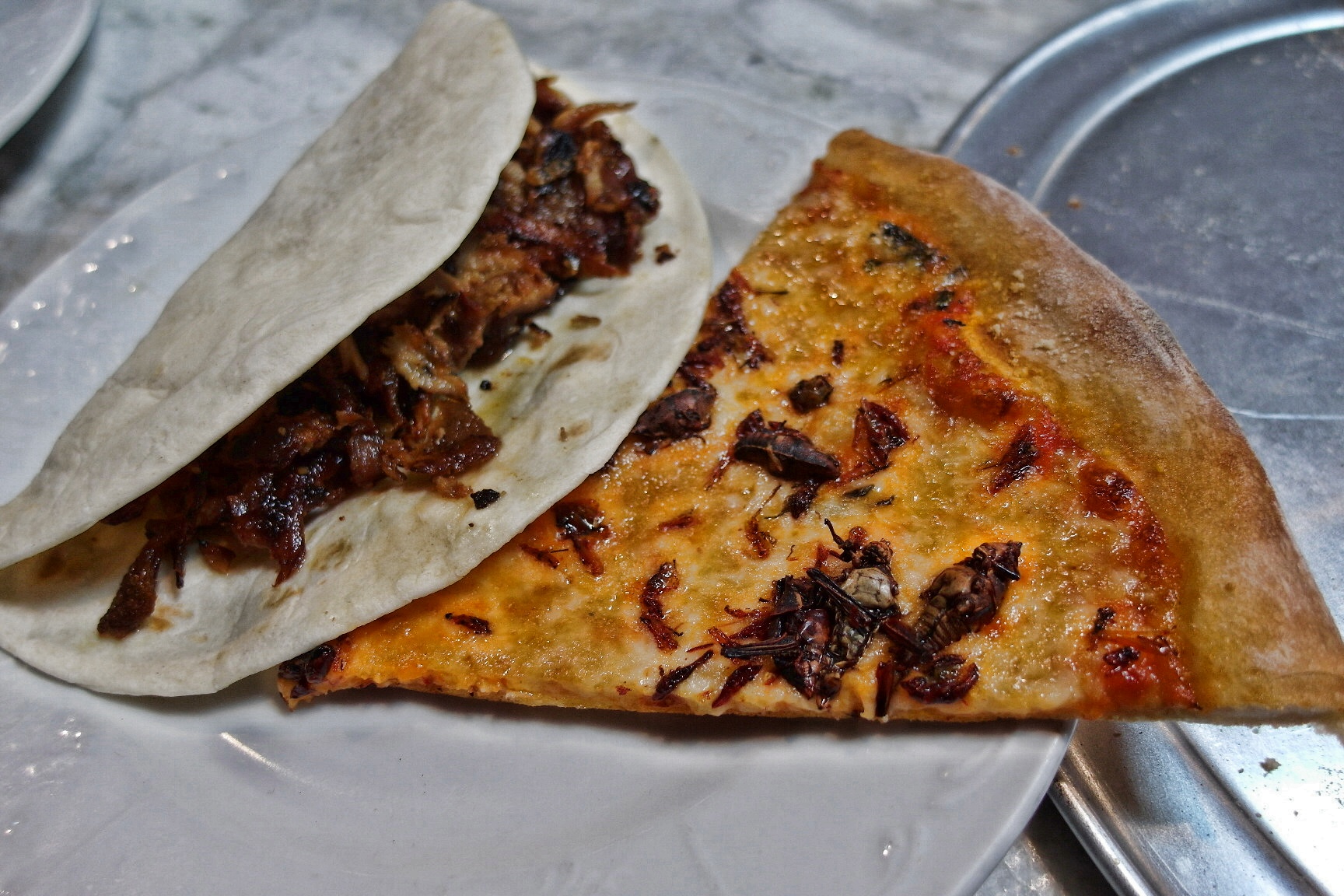 And then there are those chapulines.

The crunchy, briny critters are about as subtle in taste as a light dusting of pepper flakes on a pizza might be, though visually they take some getting used to for the uninitiated (even several of the Mexican servers admitted they’re a bit intimidated by them). They’re sprinkled atop mozzarella cheese and tomato sauce, making for an otherwise classic (and delicious) cheese pizza. 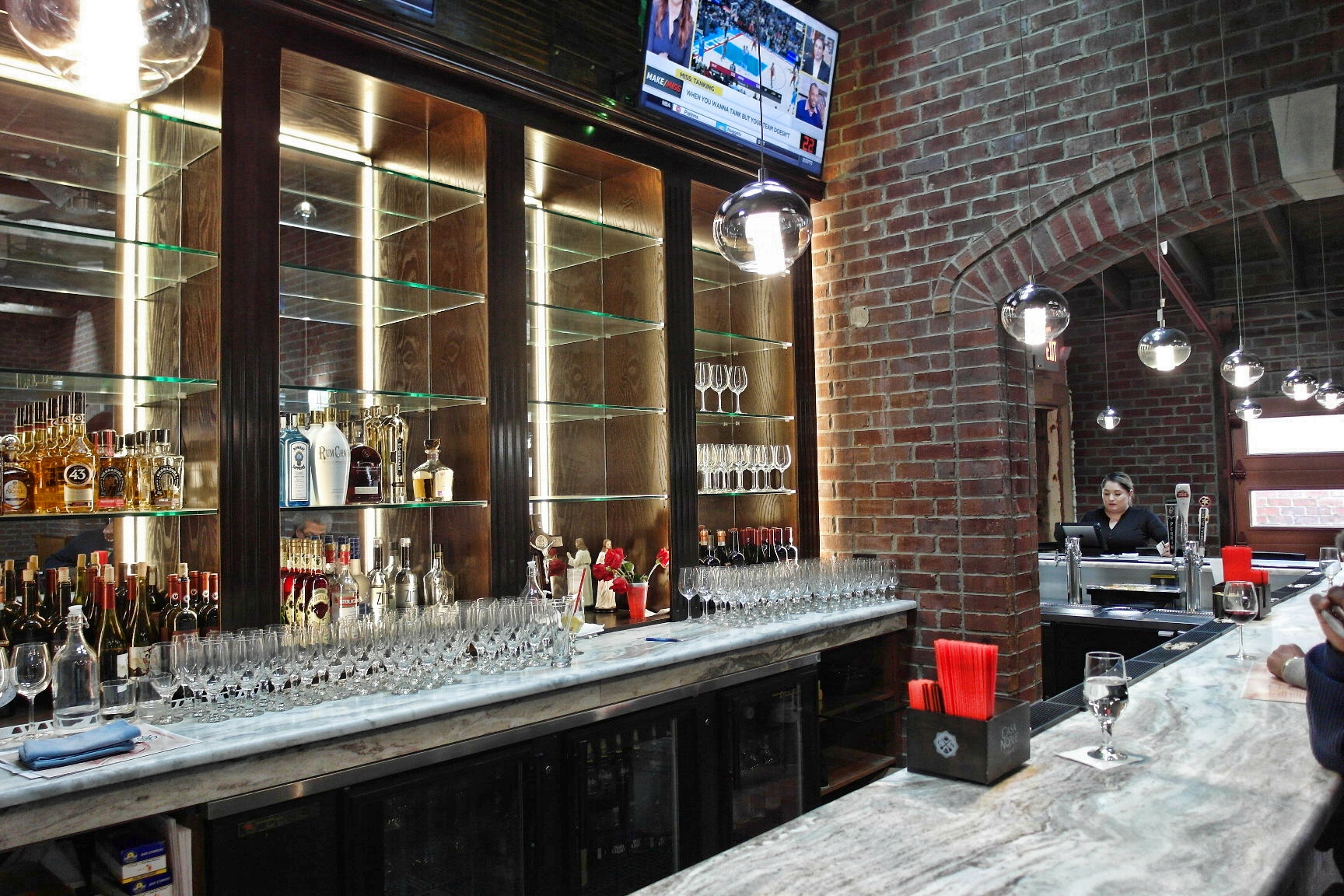 Aside from the great care Garita takes to offer a bit of variety in the local Mexican food scene, the restaurant itself is impressive. The family spent the better part of three years renovating the space — a former Coney Island diner. It now feels like a cool lounge and bar, complete with two spacious dining rooms, exposed brick, garage doors that during the summer will open up to two patio areas and vintage tin ceiling tiles.

With La Noria open, Garita says El Barzon will continue to serve as a nice place for dinner, while its casual neighbor will offer both lunch and dinner, but with a more laid-back vibe.