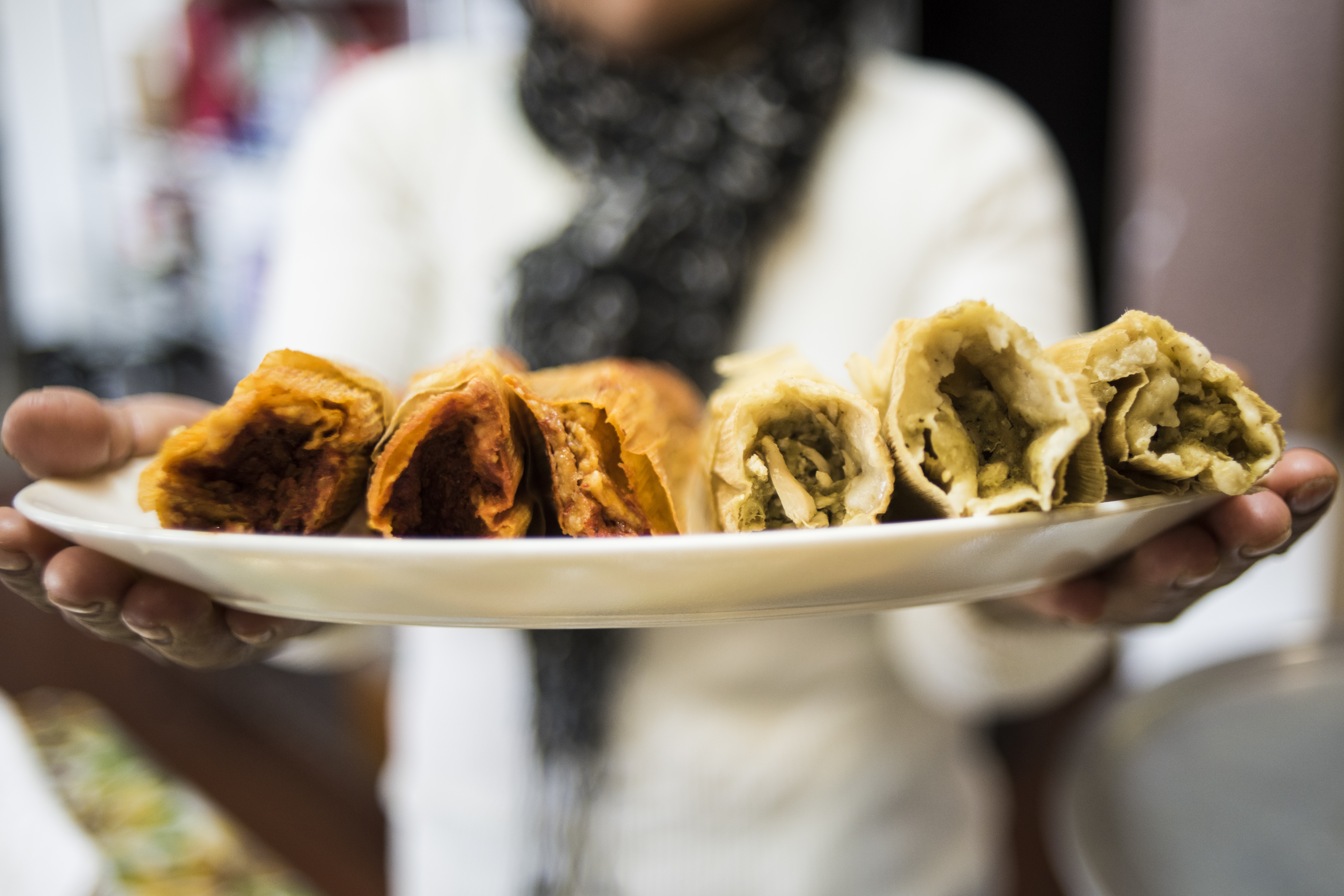 The tamal is the perfect Christmas present. After all, it comes already neatly wrapped inside a corn husk or banana leaf. It’s handmade, which of course, is always the best kind of gift, usually made with love in a home kitchen by an assembly-line helmed by abuelas, tias, and moms, who direct all the primos in the hours-long assemblage, often taking place on Christmas Eve. The tamal is incredibly comforting for the body and soul during long, cold, dark winters, with its fluffy masa and fillings of chile-laden stewed pork or chicken, veggies or cheese, jalapeños, beans, and sometimes sweet fruit. The aroma of the tamaladas that fill the air, whether they be from a home kitchen, a restaurant, bakery, or church kitchen are as ubiquitous to Christmas as gingerbread and candy canes. For many, the tradition has shifted away from making them at home to picking up a dozen (or 10) from the local tamaleria, usually founded by other peoples’ abuelas and passed down from generation to generation. Therefore, we’re here to celebrate the tamaleras of Southwest Detroit who labor away during the holiday season by asking them how tamales have become entwined in their families’ legacies.

Note: These interviews have been edited for clarity. 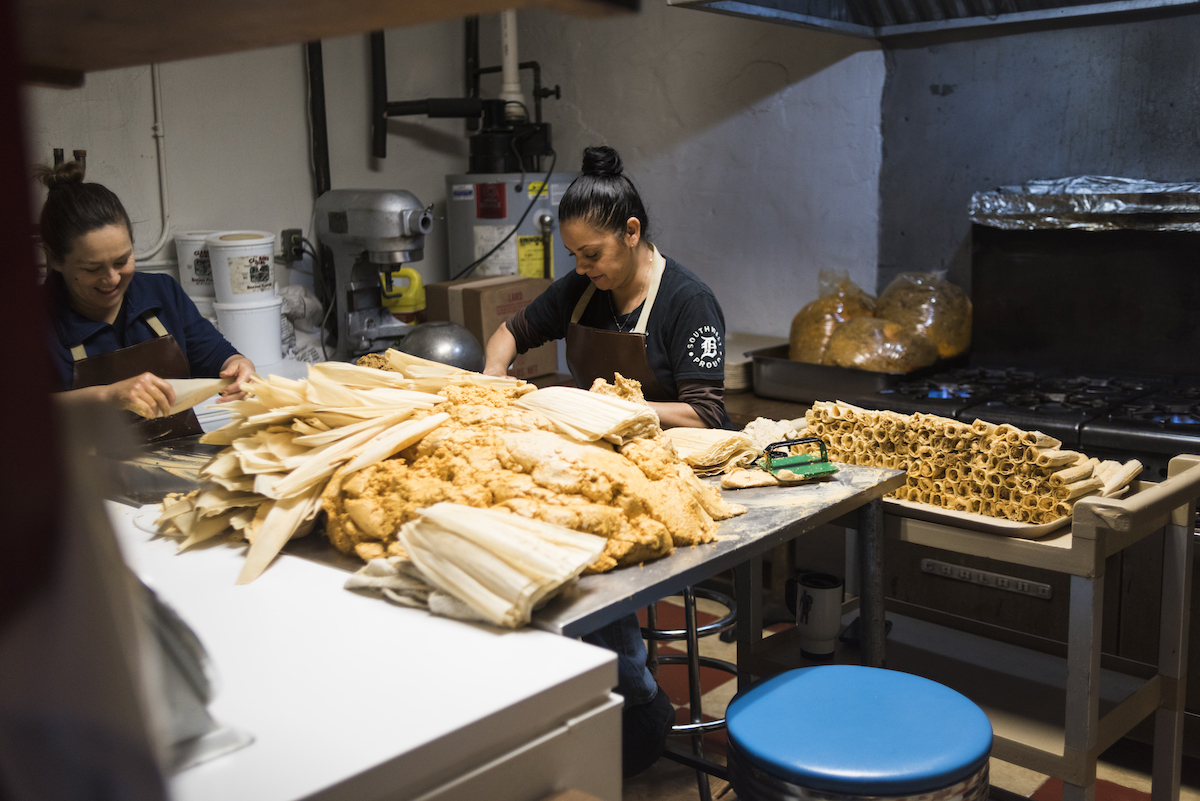 Susy Garza, owner: My mom got started back in 1957 out of necessity. My dad at that time was working at Great Lakes Steel and they were on strike. I wasn’t born yet. So they got here in 1955 from Nuevo Leon and lived on 23rd Street. And so when my dad went on strike there was my mom and my dad, my two older brothers, my sister and the baby. So she started making tamales to sell to friends to make ends meet. Then, in 1962, that’s when she got the first location which was right down the block at 2661 Bagley St., which happens to be right behind her house. So the commute was out the back door and into the back door.

Come Christmas time, it’s a tradition, it’s tamale season. The joke among Latinos, it’s the only gift you get to unwrap. You can’t go to somebody’s house unless you have the tamales in your hands. This time of year, I usually put in 70 hours a week, I work seven days, 10 hours a day. The ladies here roll 140 pounds to 150 pounds of masa a day. They start roughly at 8:30 a.m. and with the three of them, and by 1 o’clock they’re done. Sometimes they’re done earlier than that, but I still pay the same full day. So we will probably sell roughly about 5,000 pounds of premade masa so for the people who make them at home or make them to sell on the streets too. Everybody’s got to try to make their money somehow. I love the idea of making them at home. 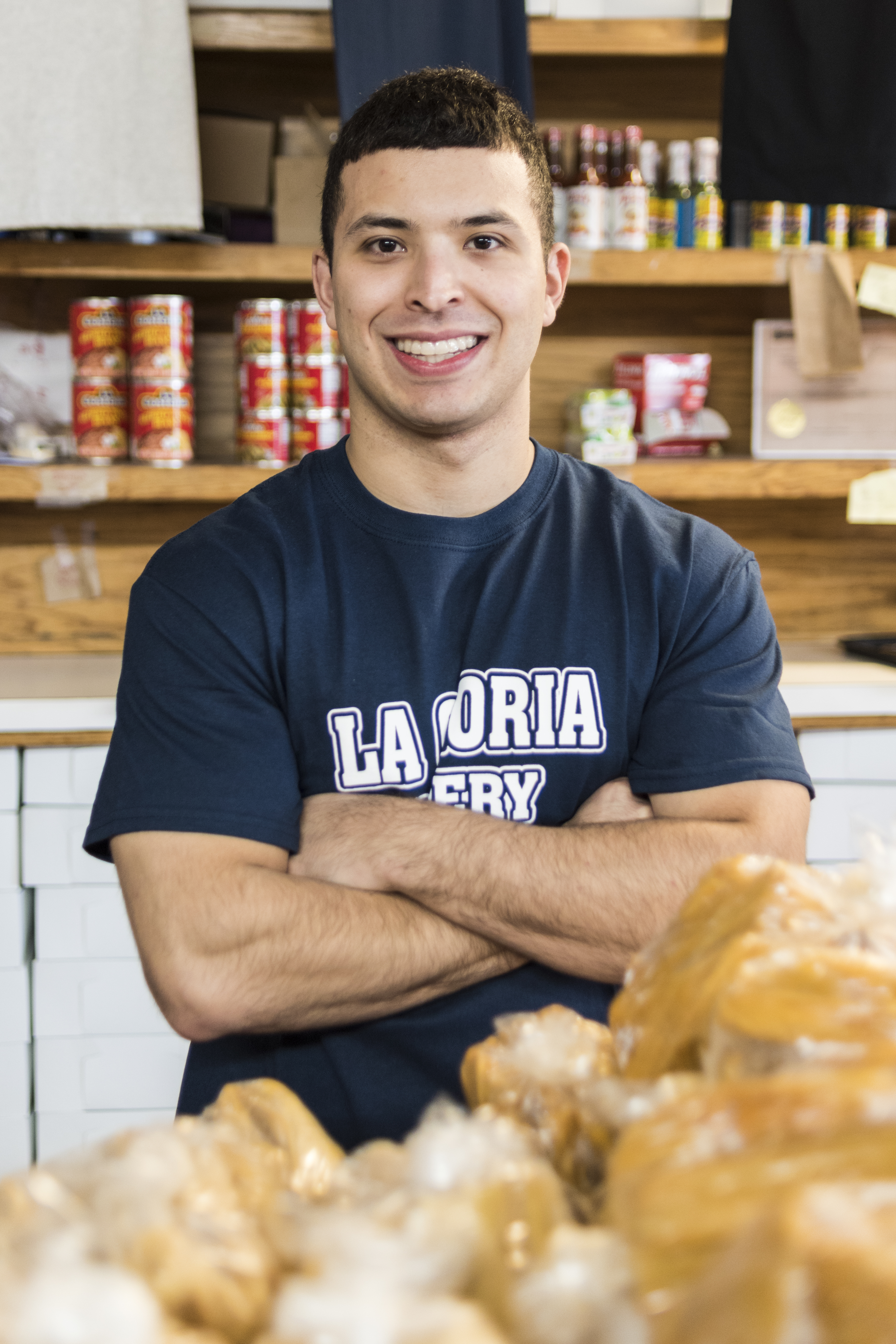 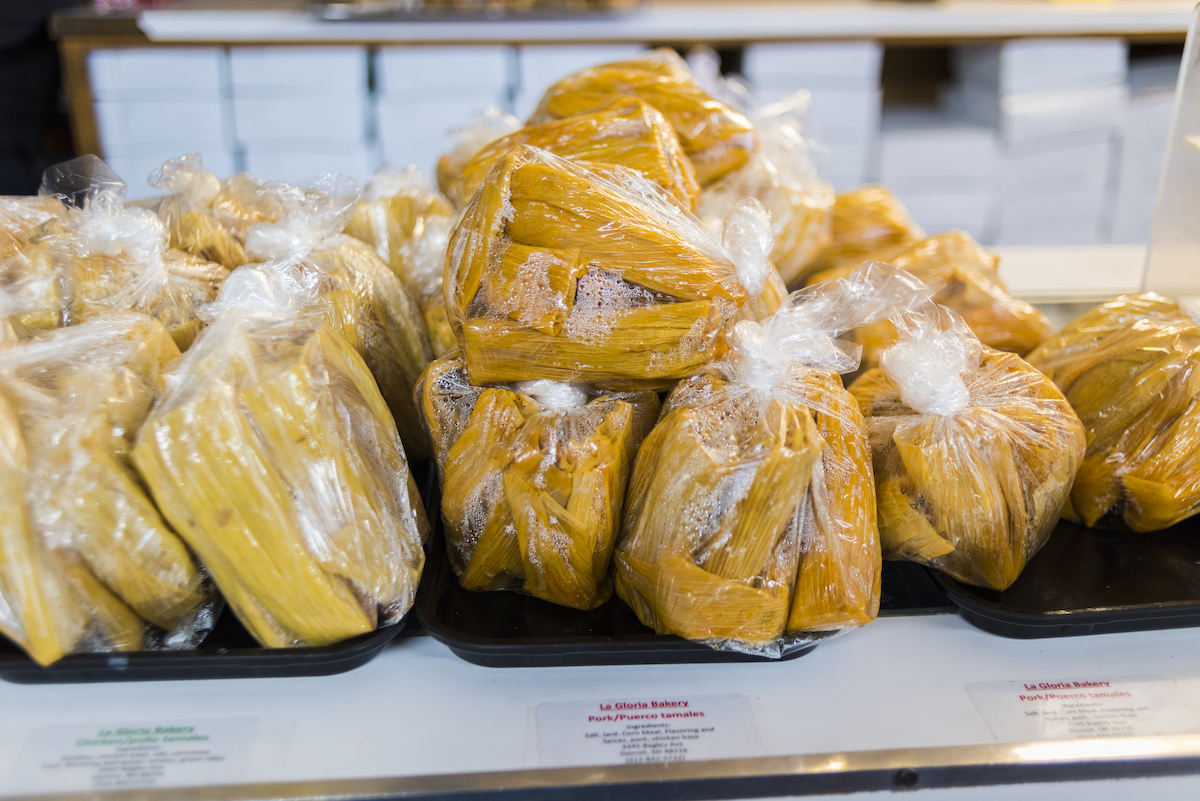 Juanita Gonzalez-Franco, owner: My dad has had the bakery for 45 years, but we weren’t making them at first, it was always just cookies and pastries and stuff. And then, I don’t know, my dad just decided that he thought it would bring in more money and more business with food. So he started with the tamales, probably back in 1999.

For the holidays, people come in and buy them in bulk. The biggest pot we have is like for maybe 30 dozen and more. And then the smaller pot is probably for about 15, 20. We make pork, chicken, and cheese and jalapeno, and we’ll also be making bean and cheese for the holidays. Every day, we go through about 15 dozen at least. 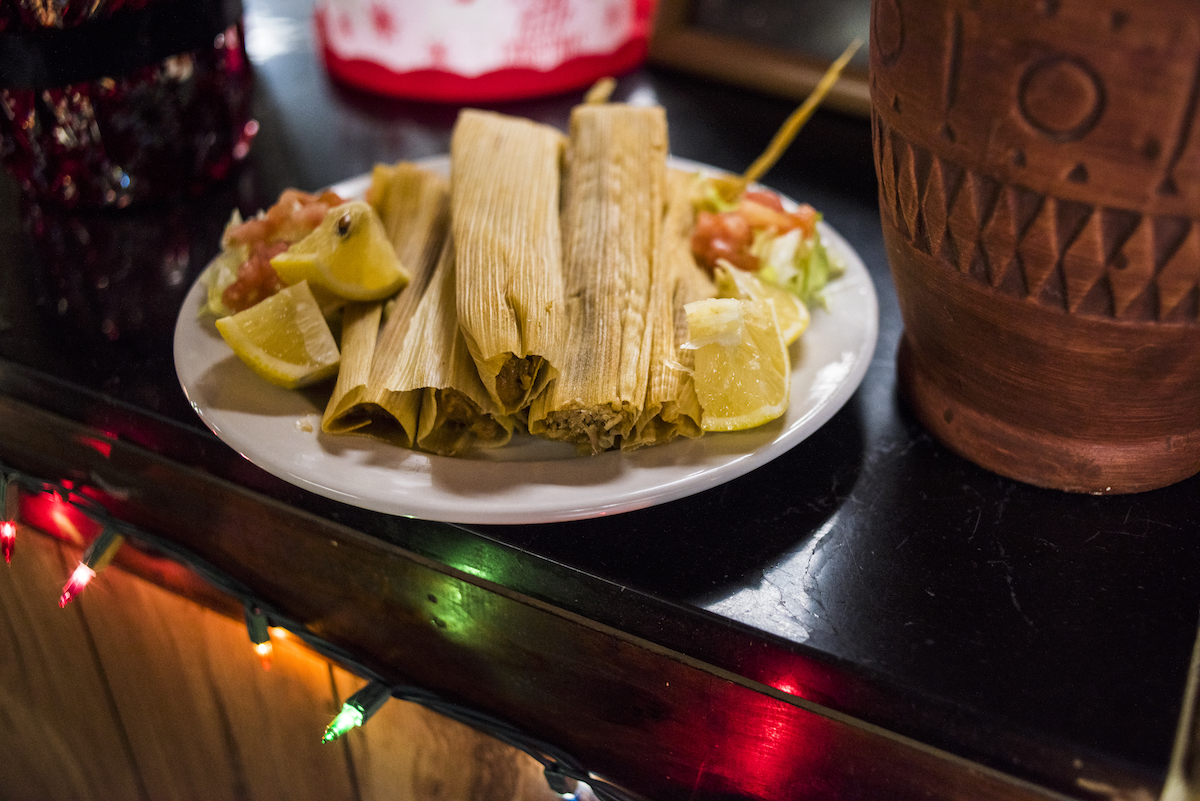 Mikelyn Grimaldo, grand-daughter of founder Evelyn Grimaldo: My grandmother started making tamales in her kitchen and she would just make it for the family. There were my aunts and uncles, there were nine kids altogether, so my uncle convinced her to open this place. When they opened, it was just what you see here. At first, she did tamales, that’s it. Eventually, she would make tacos for like whoever was working here and then more people wanted her more of her food. From there, it grew and then we bought the building next door to us, knocked it out. And then the building behind that so that’s what you see here.

During this season, we’re making our tamales 24 hours a day. They’re making thousands of dozens of tamales. So for like Christmas Eve and the day before we close both the dining room and this part out front down and the whole place is just filled with boxes of tamales. People will come in a buy maybe 10 dozen tamales at a time.

This place is like a family. All the waitresses have their own people who come in and see them and talk with them, every police officer down here knows my aunt, so they all come in and they all call her grandma and give her a big hug and a kiss. If someone wants to come in and ask for the recipe, she’ll give them the recipe, it’s no secret, and if anyone comes into the restaurant that’s hungry she’ll feed them. This place just feels very homemade. It’s just like a mom and pop type thing, you know? We’re not pretentious or anything. This is just us. 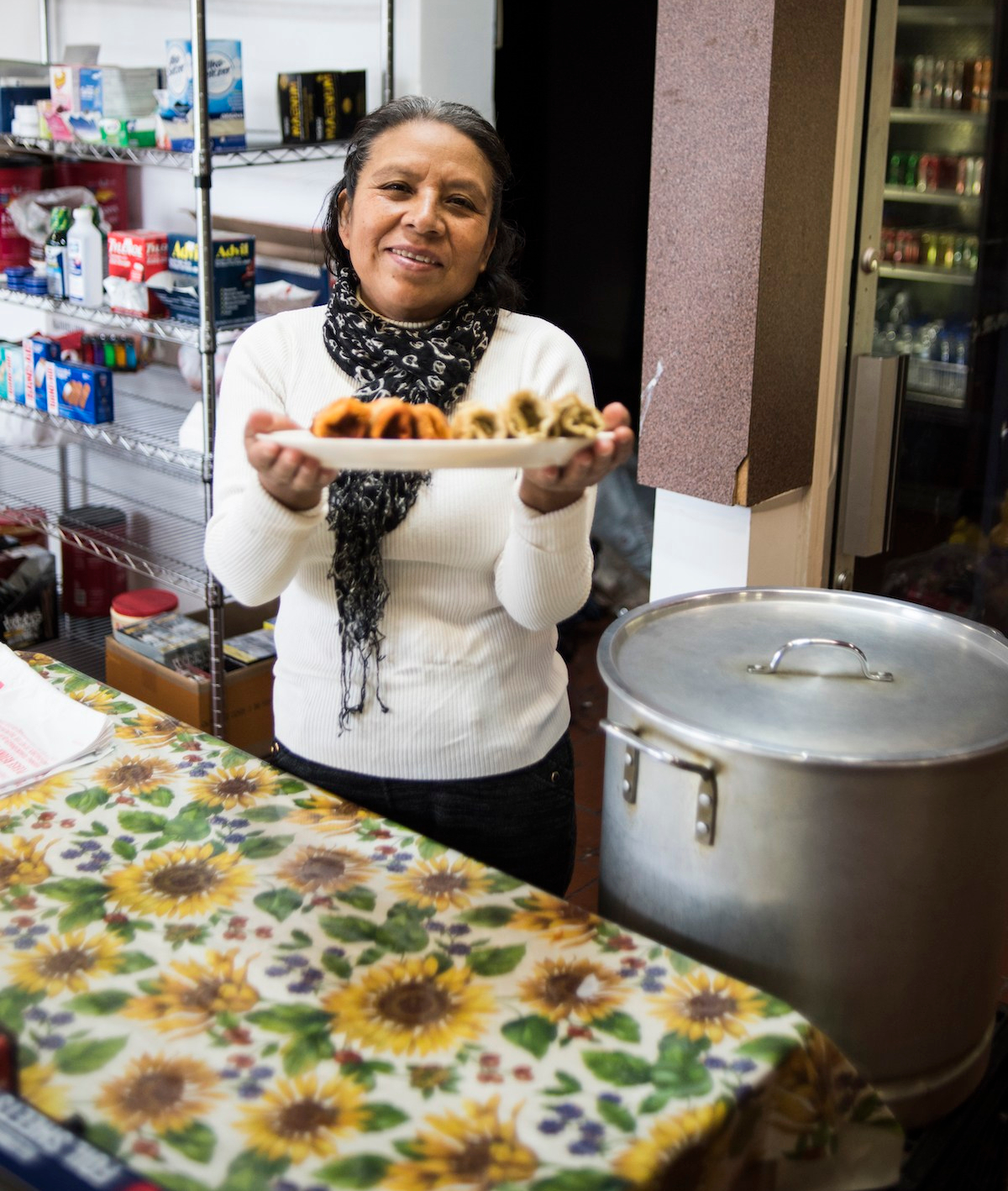 Rosa Ortega-Juan, as told by son Gabriel: My mom started to sell tamales like two, two and a half years ago. She moved her from New York in like in 2015 or 2014 and she’s a really active lady who doesn’t like to be at home all the time. So she went and worked at a factory, she worked in different places, but I think she didn’t like it and wanted to start up a business and so she just started selling food from home. She made different plates every day, like mole poblano, all these homemade kind of foods to people like landscapers. I don’t even know where the idea came from to start doing tamales because they’re really labor-intensive but next thing I know she said, ‘I’m doing tamales tomorrow.’ So she started to do tamales and people started to buy a lot of them and since she likes to stay active and self-employed she said she was going to start doing that at La Virgencita parking lot Vernor near Lawndale. She would cook them at home and sell them from the trunk of her car there. And so she was doing really good and that’s when she said she wanted to start her own business. At the time, I was working as a paralegal and we live down the block from here and there was an opportunity to buy this building. So we took the risks and said, let’s do it. So we bought the building and it was a mess inside, it needed a lot of work, and at first, she was selling her tamales outside in the parking lot. So she was here in the mornings selling to landscapers and construction workers on their way to work and at La Virgencita in the afternoons selling mostly to moms picking their kids up from school. At that point, I wasn’t involved at all, she the one running the whole operation. But little by little, we started fixing the building. We had the whole building for a year when and eventually was like, I need to quit my job and just focus on this. When we first got the building, we wanted to make it into a restaurant, but that would have required so many permits and work that I decided to stick with more of a convenience store, where we could sell the tamales and other things like snacks and drinks.

When she first started, she started the business under the name Little Bee. One of the jobs she’s had is sewing. When we moved to New York from Puebla in 1993 she worked for years as a seamstress making clothing and when we moved here, she had a job sewing seat covers for trucks. She’s a really tiny lady and she was working with these other ladies who, according to her, we big and strong compared to her, but she was so fast at what she was doing they started calling her Little Bee. So when she started to sell tamales and asked me to register her company and make her a business card, that’s the name we came up with, Little Bee Catering. But then later I got her a car license plate that said La Jefa, so we started calling her La Jefa.

We usually make 300-400 tamales a day. We make chicken with the salsa verde and then the red pork ones. Most of the people who buy tamales from us are people who work in landscaping or constructions or they go to work in a company or manufacturer, people who work in the trades and they all come in before 9. At La Virgencita, it’s more like moms who are picking up their kids or people who are coming back from work. It’s funny though because after a while I started to see new people coming in, people that you don’t really see in the neighborhood, and I was thinking like, OK, what’s going on? Then there was this lady, who works for Metro Times. She came in once and ordered tamales and then she came again and said that she would like to do a review. So she published that review and we started to get a new kind of clientele, mostly who like the jalapeno and cheese tamales, so more like vegetarians. That article really put us in the spotlight and brought us a whole new clientele and so we started adding jalapeno and cheese on Fridays and Saturdays.

Tamales are one of those Mexican foods that takes a lot of time and work. So so in Mexico, those kinds of foods, normally they are used for special holidays, like weddings, quince años, Christmas, after somebody dies and during the 10 days of prayer, somebody’s bringing tamales.

My mom told me there’s this belief that at the end when you’re putting the tamales into the pot to steam, some people have special rituals. Some people pray to the tamales. They say that the person who puts the tamales in the pot is the only person who can do it because if somebody else comes in and maybe they’re upset or mad, the tamales will get upset, mad or annoyed so they will not cook right, there will be parts of the tamale where the masa is not well cooked, half of the tamale cooked, half not. To solve that problem, that person will check on the tamales every hour and if they see that the tamales aren’t getting mad at something and if they are, they may hit the pot with something so that they can cook correctly. So when my mom is making the tamales, sometimes she’ll say: don’t be mad, be happy, talk to the tamales, they’re special things.