Editor’s Note: During this unprecedented time of uncertainty, food is most often at the top of our minds. Tostada Magazine is launching its “Food in the time of Corona” storytelling series by publishing personal essays about how our relationship with the food world has dramatically changed. In the coming weeks, we’ll be sharing stories from the vantage point of the restaurants that have closed or have transformed their business models, the servers and cooks who are without work, the store clerks who continue going to the supermarkets every day to feed families, the social justice activists who are helping their communities, and the home cooks who are turning to their kitchens as a source of comfort.

Here is our first installment.

Ten thousand dead in New York. Numbers beyond reckoning here in Detroit. We are safe. It’s not that bad. It’s the end of the world. Get back to normal. There is no normal. Normal was, it turns out, a myth. Let’s send a pizza to the “frontline workers” (I don’t like that phrase frontline, it feels very anti-social for a line of work that’s so deeply human). Pizza is good, right? What’s that old joke about pizza being like sex? Even if it’s not great, it’s still great. Touch. Too much, not enough. Nothing is in balance right now. Maybe too much pizza actually does exist. Who knows? It’s one of the million things that no one knows right now.

Getting a grip on what to do during this pandemic has been hard for everyone, but in our household, it’s taken a different shape. My husband Chris is an emergency physician in the Henry Ford system, in a satellite emergency room in Dearborn. Henry Ford Fairlane is one of the busiest satellite emergency rooms in the country — with 70,000 visitors a year — without the pandemic. It’s attached to an outpatient surgery center, so there aren’t any of the small comforts ordinarily found in a hospital. No cafeteria, no gift shop, no warm meals, nothing extra unless someone brings it from home. I stay home with our two small boys and try very hard not to go anywhere, in case I’ve been exposed to the virus by Chris. We are very careful with his decontamination routine, but nothing is perfect. Anxiety and boredom ratchet each other to new levels daily. Every day is a new worry of exposure, followed by the mind-numbing stagnation of being home, again. The weather adds to this. A couple weeks ago, 70 degrees and sunny. A few days ago, it snowed all day, with no accumulation, just more mud, to go with all the other mud. Even that feels like an admonishment: Stay Home.

But back to those imaginary pizzas. I kept seeing social media feeds inundated with pictures of hospital staff in their break rooms, eating pizza after pizza, looking like that meal was the one thing keeping them tethered to this earth. Talking to Chris, he made an offhand comment about how the pizza places were going to be the last restaurants standing after all this. I started thinking about the scores of restaurants on the brink of closing their doors forever and about the healthcare staff and their never-ending pizza binge, and I began to wonder if there was anything I could do to help. If I could marshall my resources to pay for a few lunches, the hospital workers could enjoy a more… balanced meal and at the same time give some of these other food businesses a little income (I should point out that this was at the beginning of the stay-home order — at that point, we had little idea how long this might go on). By “my resources,” I only mean my social media and desire to feed people. I started with the Fairlane ER because it felt manageable, and I didn’t want to get overwhelmed and end up doing nothing at all. We live a comfortable life, but I certainly didn’t have the money to buy more than maybe one lunch for 50 people. Maaaybe two, if I stretched. Approximately 100 people work there — this includes day and night shift, and all support staff, not just doctors and nurses. I’ve tried to alternate lunch and dinner deliveries in order to make sure that no one gets left out.

I started raising funds by asking on Facebook if people might send me some money on Venmo or Cash App so I could buy lunch. On the first day, I was able to get chicken shawarma, rice and hummus delivered for lunch from local spot Al-Ameer. They threw in an order of roasted potatoes for free. It was served family-style, which is not ideal, but we hadn’t figured that out yet. The staff was thrilled, I was thrilled, and the restaurant (shoutout to Hassan, who was so patient with my card getting declined, then having to post the transaction again and all manner of confusion). The next day, I had enough to order — yep, pizza. But it was Buddy’s, the best Detroit-style pizza, and they’re paying their employees an extra $2 an hour right now, so it felt like a good choice and I bought about 10 pizzas. By now, I started trying to think, how long could I keep this going if I didn’t know how much money I would have from day-to-day?

I figured I would just call, talk to whoever I could reach — donors and chefs — and take it from there. I reached out to a dear friend, Kevin Reynolds, one of the managers of Ima Noodles. I asked him if he thought Mike Ransom, the owner, would be able to deliver 50 lunches. No, Ima doesn’t usually deliver, but things have changed since before everything shut down and Kevin told me that he would happily make the drop if Mike said it was okay.

Mike was immediately on board; when I asked him how much I owed him for lunch, he told me he’d get back to me. Fifty bowls of golden curry rice, roasted veggies and chicken. I didn’t have any idea how to calculate the cost, other than as a retail customer. I crossed my fingers, hoped I had enough, and went to bed.

Almost immediately after Gov. Gretchen Whitmer ordered that restaurants close their dining rooms and switch to delivery or pickup only, I read an article about Omar Anani of Saffron De Twah who made the decision to close and I thought about what that must have felt like. I lamented the closure, I hadn’t been there yet and had really wanted to try it. I wondered if anyone I knew could put me in touch with Chef Omar. No one came to mind.

What’s crazy about social media is you never really know who’s paying attention to your posts. Turns out, the next day, I got a private message from my friend, Shane Bernardo, who hasn’t been on Facebook in a really long time. He asked me if my partner works at an ER in Wayne County, and if I would be interested in a chef delivering hot, healthy meals to the department. I replied yes, please! And we began to discuss the logistics. About half an hour into our conversation, it occurred to me to ask who the chef was. It was Omar Anani. Amazing.

Shane, Omar and another friend of theirs, Simbisai Hove, had also been able to gather some donations to help offset the cost of the meal, phew, I could order another one! In the meantime, Mike finally answered my question about paying him: He donated the entire meal. Here’s the thing, not to sound all mystical about it, but in addition to basically providing me with seed money, that donation set this whole project on a path of such good energy that it almost can’t be explained.

Good morning lovely people! We are making some good eats for @henryfordhealthsystem Fairfield today! A big THANK YOU to @salt.textile.studios for the masks for our team! All this can't be done with out everyone's help and financial support, we appreciate you guys so much! If you would like to donate please click the link in our bio! Your donation goes towards feeding #feedthefrontlinesdetroit.

The next person to get involved was Molly Mitchell, of Rose’s Fine Foods, referred to me by a mutual friend. Molly’s eagerness to get involved and her ability to raise money on her own meant that I could reach out to yet another kitchen. She hit the ground running with her beautiful, scratch-made comfort food: a hearty potato frittata and homemade plum-iced donuts. She was able to use what she had left in her kitchen after closing, she had given all the fresh produce to her staff when they closed. In her words, “I keep a lot of potatoes, onions and eggs on hand here.” I couldn’t help but laugh at her deadpan delivery; Rose’s is primarily a breakfast spot. I couldn’t imagine how many potatoes, onions and eggs she must keep in that tiny building. A million, probably.

Next, I called Mamba Hamissi and asked him if he had the capacity to help with these meals. He and his wife Nadia have two small daughters and are working to open Baobab Fare featuring food traditional to Burundi where they are from. Our kids are close to the same age; I met them a few years ago at the park, and we’ve been friendly since. 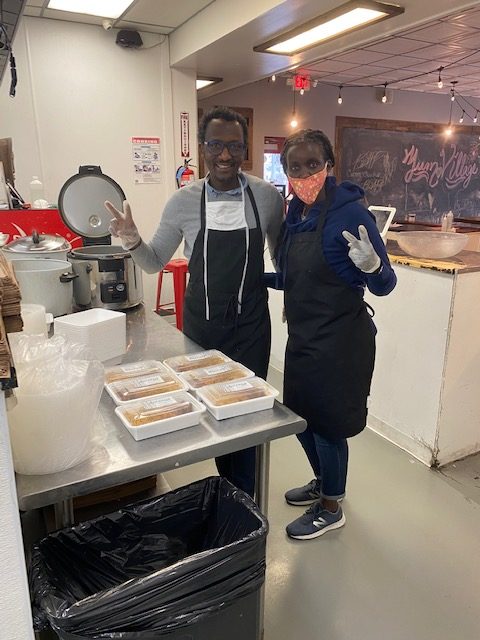 A couple of other kitchens have come into the rotation, such as Rocky’s Road Brew, Coriander Farm & Kitchen, and See You Next Tuesday pop-up. Each of these businesses have been able to raise a little bit of money on their own, which stretches my budget and allows me to reach out to more kitchens, and as we do more, we can do more.

Each of these small businesses has also taken on the responsibility of delivering to a pretty foreboding spot. There is a triage tent outside the building, which is pretty surreal. I’ve only seen pictures of it. The delivery routine is old-fashioned and bare bones: the cooks call or text me to tell me when they’re about 10 minutes away, and I text the nurse manager. Someone comes to the door with a cart to accept delivery. Everyone wears masks and gloves. You can usually still see their smiling eyes in the hastily-snapped phone pics we post daily. 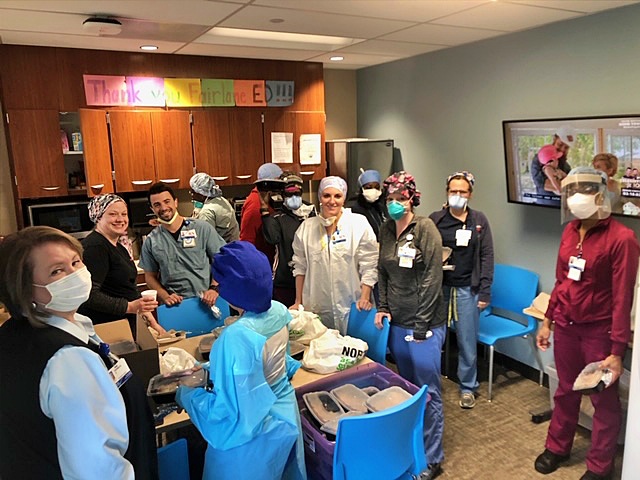 Chris looked at my calendar the other morning and pointed out that the little Ford Fairlane ER has been fed nearly every day for the month of April. I just nodded and went back to what I was doing, but I realized that’s nearly 1,500 meals.

We still don’t know how long this will last, but all we can do is keep doing what we’re doing: reaching out to one another, however we can, for as long as we can. Feeding others, feeding hope, feeding community.

Donations can be made to Venmo @Elisa-Gurule or Cash App $ElisaGuru. If you’re a chef or run a restaurant or other type of food business and would like to get involved, email Elisa at ehgurule@gmail.com.

Want to be featured in this storytelling series? Contact us at info@tostadamagazine.com.