As a student at Wayne State University in the ‘90s, Ally Vang would drive south on Woodward to the downtown area, and she felt drawn to the area for some reason.

“I was just always impressed and I always wanted to be a part of this downtown atmosphere,” she says. “I didn’t know that a decade later, I would have my own restaurant in that area.”

In the early 2000s, Vang was working in IT with the city of Detroit’s Planning Department, which at the time was located in the Cadillac Tower, which, Vang recalls, was surrounded by empty buildings and dilapidated lots.

“It was almost like a ghost town,” she says.

Still, she would look out of her window office at a dirt lot that she parked on for $5 a day and wondered, quoting the Reba McEntire song, “Is There Life Out There”?

Her husband was also in IT but unlike her job, which was a steady gig, his was more uncertain.

“He was jumping from place to place because he was a computer programmer working for software companies that sometimes went down under.”

Then Compuware bought that dirt lot and built its headquarters. Her husband came from a family of restaurateurs (they run Sawasdee Thai restaurants in West Bloomfield and Milford) so then she decided that “I was going to join the family adventure … and contribute to the rebirth of this lower Woodward area.”

In 2004, she and her husband opened Orchid Thai, which Vang proudly says is a “woman-owned business known for multiculturalism, customer service, and fresh and quality cooked meals.”

When the eatery arrived in downtown, it was a few solid years before big employers like Quicken Loans and national brands like H&M and Nike made their way onto Woodward.

The first few years proved difficult for Vang, whose family immigrated to the United States in the late 1970s when she was an infant. One of the biggest challenges was being a first-time restaurateur, she says.

“When we first opened up, it was our first adventure (in the industry). So we had a lot of fear and uncertainty about how will it succeed?”

And when she opened the casual dining restaurant, Detroit was already in the midst of a recession, just a preview of what the Great Recession had in store for the Motor City and the rest of the country.

In the early days, business during the lunch rush was healthy thanks to the downtown worker crowd, mostly from Compuware. But after 5 p.m., downtown was nearly empty, meaning low sales volumes in the evenings.

But Vang stuck to it, seeing the potential for better days. They pressed on with evening hours, adding bar service and beer imported from Thailand. Eventually, the crowds started making their way in during dinner service, Vang says.

“We focused on quality and quantity at a fair price,” she says.

That patience and perseverance proved to be a smart and calculated strategy, even as they weathered not one but two recessions. From 2007 through 2009, Vang says the business adapted in response to the high unemployment rate that Detroiters faced.

“Our business evolved to survive the Great Recession,” Vang says. “We expanded our business model from being more than just a casual dining restaurant.”

Orchid Thai saw more business from carryout and expanded catering. Another key strategy was building relationships with large food service companies, which paved the way to do food pop-ups at major corporations in Metro Detroit.

By the time the area started booming again with new office workers, retail, and more food options, Orchid Thai had long established a loyal following, building its reputation on its fresh take on Thai fare featuring locally sourced produce including organically grown Thai herbs as well as a modern spin on family favorites, a fusion of traditional recipes and modern ingredients.

“Our dishes are inspired by recipes that we have enjoyed since childhood,” Vang says.

For example, the pad Thai, which Vang refers to as a “candied pasta” is a well-balanced dish that is sweet and salty, with a hint of citrus from white wine, Vang says. The contrast of textures of the fresh bean sprouts and the soft noodles bathed in light lolly sauce make it Orchid Thai’s best seller.

Vang’s favorite is the Panang Duck, which she calls crispy, yet sticky, but delicious. The spicy curry, coconut milk, and kaffir lime add depth of flavor to the dish. 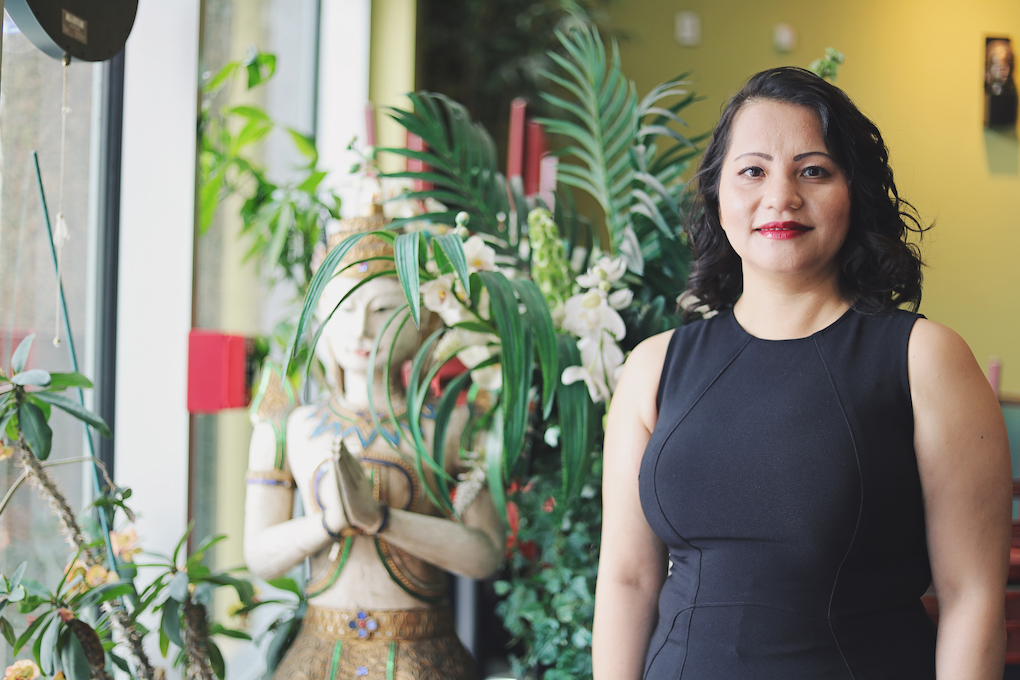 And while the restaurant stays true to the roots of Thai flavors, Orchid Thai also experiments with playful, contemporary twists, from the rich and creamy pad Thai curry to the steak and cheese eggrolls.

“Keeping up with change and being able to adapt to it has been something that’s very important and helped us in surviving throughout the years,” she says.

When the COVID-19 pandemic hit and Gov. Gretchen Whitmer ordered all restaurants to cease dine-in services on March 16, Vang’s resilience was tested yet again. She attributes Orchid Thai’s longevity to her ability to adapt.

The restaurant closed temporarily and didn’t reopen until mid-May for carryout and delivery. That doesn’t mean that she and her team sat idle during that time.

Her daughter is a medical assistant at Henry Ford Hospital Macomb and gave Vang firsthand accounts of her experiences helping critically ill patients.

“I started to have more sympathy for frontline workers because I hear stories every night from my daughter coming in from work, sometimes crying that the patient she’s been caring for weeks is now gone,” Vang says. You feel connected and you feel this love for these frontline workers.”

So Orchid Thai started sending food to different units at the hospital and learned about the Pay It Forward campaign to help feed people experiencing homelessness and at-risk girls through the Neighborhood Service Organization and Alternatives for Girls.

With its core clientele working from home the past few months, sales at Orchid Thai have gone down more than 50 percent, Vang says, its staff of about 16 has whittled down to about a fourth of that.

“The normal lunch rush that was our bread and butter has disappeared as folks are now working from home,” Vang says. “We are surviving because we have a landlord who is flexible with his rent requirements during this pandemic. We have agreements with third-party delivery and marketing firms. We leveraged programs provided through the community to help us with promotions and grant writing.

Still, she’s hopeful for the future because she still remembers those early days of uncertainty.

With the pandemic, things are uncertain once again, even as restaurants have slowly begun to get ready to open up.

“I think we are going to weather the storm. I think we’ll make it through. It will be tough, but we do not plan on closing down,” she says.

Dorothy Hernandez is a Metro Detroit-based journalist. She is Digital Editor for 101.9 WDET, creating and adapting content for digital platforms. She previously worked as managing editor of Model D and editorial director of Issue Media Group. She frequently writes about food at the intersection of culture and social justice and contributes to a variety of national and local publications.