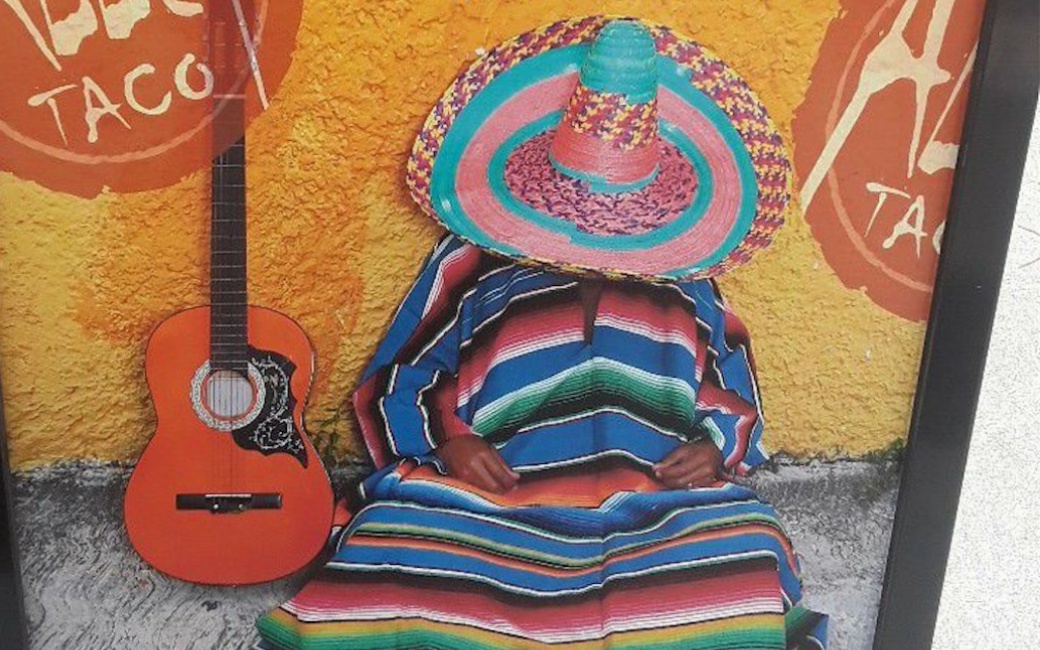 The image of the sleeping Mexican has remained one of the most infamous stereotypes in American racism, as offensive to some as blackface is to African Americans.

And yet despite its notorious connotation, one restaurant in Detroit’s Midtown used that depiction — of a dark-skinned Mexican, covered under a colorful sarape, face hidden under a gigantic sombrero — to promote its forthcoming Cinco de Mayo block party.

The imagery caught the eye of Detroit Chicana Elena Herrada and two of her adult daughters at Alley Taco around lunchtime Wednesday. Herrada, a former Detroit School Board member, posted a photo of one sign on Facebook and an online debate quickly ensued over racism and class, with some pointing out that such imagery reinforces the harmful message that brown and black people’s only value to society is when they can be used as cheap or free labor. Other commenters also called for a boycott of the establishment. Meanwhile, one of her daughters complained to restaurant staff.

“It’s an infantile representation, he doesn’t even have a face, he’s just completely non-human,” Herrada says. “Where does anyone get off using that image to promote their party? It completely dehumanizes a whole race of people for a fucking party.”

By mid-afternoon, any sign of the advertising was gone. Owner Jason Frenkel tells Tostada Magazine that he had it removed after the confrontation, but had previously never known the hurtful meaning behind the image.

“To be honest with you, I’ve lived here, I’ve lived a lot of different places, and I’ve never heard of the stigma,” Frenkel says.

Frenkel says after hearing from the customers he received a call from a woman from a local development organization in Southwest Detroit, who “basically gave me some education on the whole situation, saying that it represents the lazy Mexican and it’s something that set back the community for a long time.”

Frenkel adds, “That was news to me because whenever I think of a Mexican person I think of usually more than hard-working, you know, so it perpetuated a stigma that I had never heard before.”

A quick image lookup traces the photo Alley Taco used to a Shutterstock file, with key words: “Mexican typical lazy man sombrero hat guitar serape nap siesta.” Frenkel says he didn’t find the image through that particular site, that he picked it because it was colorful. In the month the signage was posted at the restaurant, he says, none of his Latino or Mexican staff expressed any concern over it.

Whether or not he was blissfully ignorant, this mini-drama led us to put together a quick primer on the history of the sleeping Mexican and its racist undertones.

For answers, we turn to a 2012 piece by fellow journalist and author Gustavo Arellano.

Appearing in a Tucson Weekly article, Arellano writes that the sleeping Mexican started out in 19th century Mexico as social commentary on the back-breaking working conditions and poverty experienced by rural Mexicans who migrated to more urban areas under Porfirio Diaz’s presidency. Exhausted after a hard day of labor, many countrymen turned to the nearest wall to rest.

“Commentators at the time interpreted those sleeping Mexicans not as symbols of sloth, but as indictments of the Porfiriato’s cruel regime,” wrote Arellano, whose 2012 book Taco USA explores the lesser-known history of Mexican food in the United States.

For the better part of the 20th century, the sleeping Mexican icon went on to be widely viewed as a means to ridicule Mexicans as lazy, drunk, shiftless or otherwise untrustworthy. During the Great Depression, blame for the scarcity of jobs was placed on Mexicans for taking employment opportunities from “real Americans.” As a result, millions of American citizens were deported under the Mexican Repatriation Program between 1931 and 1933. During that period, in fact, Detroit’s Mexican population dwindled from 15,000 to just 1,200, according to this U of M paper on the subject.

That disdain for Mexicans turned to a fetishization during the post World War II-tourism boom across the American Southwest, when the image of the caricatured Mexican taking a leisurely siesta against a wall or cacti became ubiquitous with enjoying the “easy life.” Since then, the Mexican has been shown snoozing on the sides of tequila shot glasses, matchbooks, postcards and even crouched atop a yellow bell for Taco Bell’s logo right up through most of the 1970s.

In modern times, the lazy Mexican trope continues whenever Mexicans and other Latinos are labeled as “bad hombres,” drug dealers, criminals, or rapists who refuse to obey immigration laws.

Peter Hammer, director of the Damon J. Keith Center for Civil Rights tells Tostada Magazine via email that the swift takedown of the signage shows the power and importance of policing offensive images.

“Communities need to stand up when racist images are used and fight them, and on a good day, they might win,” he adds.

This week, it seems, the community has succeeded.

Tell us, have you seen some nonsense at a local restaurant that needs our attention? Drop us an email, send us a pic or Tweet at us. We want to know!