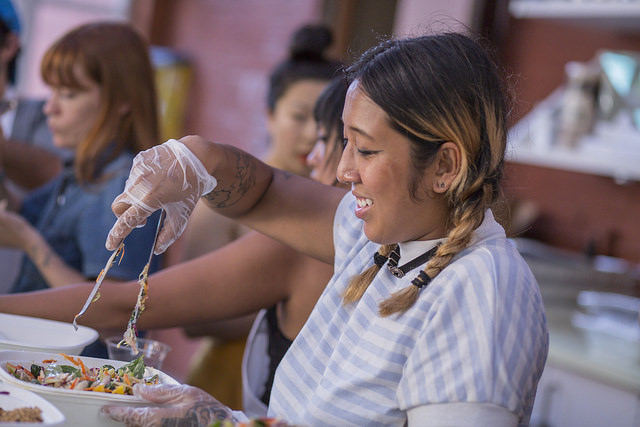 When asked to describe everything that goes on at the Allied Media Conference (AMC), organizers liken it to an ecosystem. It’s a multi-layered laboratory of organizers, media-makers and youth gathering around the power of storytelling, strategizing and mobilizing for a more just and resilient world.

But how does food fit into this ecosystem? And how can food serve as a means of resisting the effects of colonization and land destruction, while at the same time preserving cultures from erasure?

These are the sort of lingering questions that— for many of the thousands of activists who’ve descended upon Detroit for the conference the past 20 years—  hadn’t really been explored as part of the programming until recently in the AMC’s evolution.

“Here we are to share strategies and create a lab for a more just world, while struggling to feed ourselves and the youth we serve,” says Ora Wise, the AMC’s culinary director who’s also behind the Feeding Emergent Resistance Movements, Envisioning Nourishing Traditions, or FERMENT.

The idea around FERMENT is that food is a medium through which we all share knowledge and connect across time and space. Food allows us to communicate our culture over generations. But the way we eat is also a direct result of a legacy of colonization, capitalization and an exploitative, globalized food system— a system that demands the most of vulnerable populations who toil away for the enjoyment of those in power. 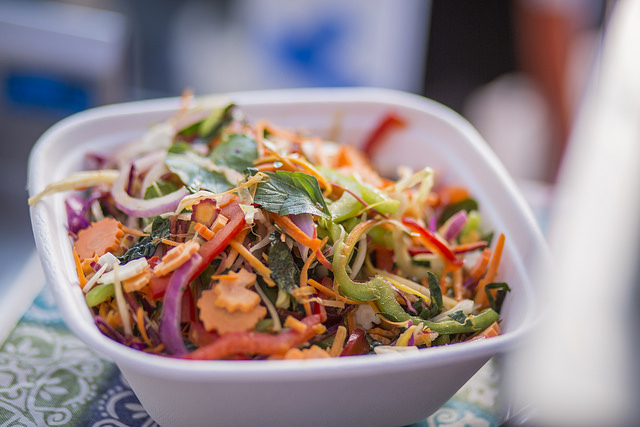 This new AMC track will imagine the possibility of a world freed from this exploitative system, as well as how cooking and eating can be a collaborative process between people and nature, between farm workers and cooks, and between generations.

On top of hands-on workshops for youth and adults, field trips, roundtable discussions, storytelling, cooking demonstrations and lessons, recipe-sharing and meals, this year’s AMC will welcome the Dream Café. The Dream Café will include a takeover of midtown’s Cass Cafe, located down the street from the conference, where attendees and Detroiters alike can engage with art, music, food, and storytelling in an experimental restaurant space reflective of AMC’s ethos.

The Dream Café will feature a rotation of pop-up menus, both on and off the Cass Cafe site, from visiting chefs like Brooklyn-based Anya Peters of the Kit & Kin Caribbean-inspired eatery; I-Collective’s network of indigenous chefs, activists and herbalists; and walk-in breakfasts, lunches and a market farm stand from members of FoodLab Detroit, a nonprofit network in support of the city’s good food movement.

Shane Bernardo, a community organizer who focuses on food justice and equity, is coordinating efforts to bring produce sourced from local Detroit farms and gardens, such as from Oakland Avenue Urban Farm in the city’s North End neighborhood, founded by Jerry Hebron, into the hands of Dream Café chefs.

If you think about it, the acronym, FERMENT,  fits perfectly. After all, the idea that food can nourish a movement has been fermenting among AMC organizers for years. It was just a matter of letting it develop organically over time.

“It’s one of the great examples of how the AMC is shaped by participants,” says Jenny Lee, executive director of Allied Media Projects.

Each year, the AMC puts out a call to organizers all over the country for input on programming,  and a rethinking of the role media plays in pushing forward movements. 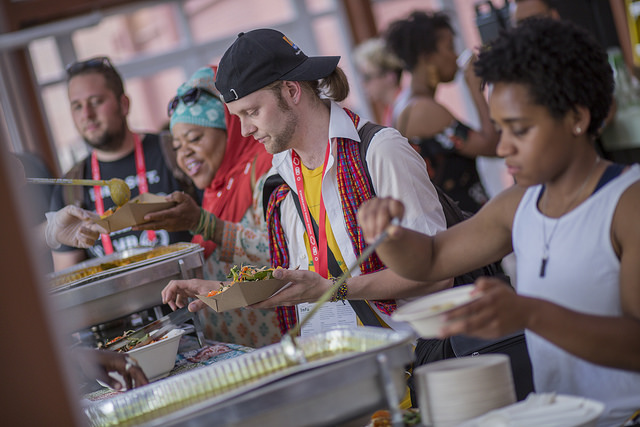 Both Lee and Wise, a Brooklyn native, have been working together at the AMC in different capacities for more than a decade. The two say the need for a food-focused track had been apparent for some time but what that might look like didn’t start taking shape until about four years ago with the creation of a community dinner on the Saturday of the AMC. It was at that dinner, says Wise, that the pieces started coming together.

“We cooked in a small kitchen for maybe 130-140 people, there was so much love,” Wise told Riverwise. “It was following the Iraqi Transnational Collective so there was also music and film and discussion around everything in Iraq like peace and the struggle for water. There was also a water march that culminated at the dinner. People in Detroit were talking about their struggle to access water and so were the people in Iraq. It became even more clear that there was a hunger for this.”

Joining the growing food focus is Munira Lokhandwala, a chef based in Oakland, Calif. She says another need the FERMENT food track fulfills is the lack of access for conference-goers to food that is produced in a sustainable, non-destructive way.

Over the past few years, a lot of attention from national media outlets has been paid to Detroit’s growing dining scene. But a lot of that focus has been centered around large-scale commercial developers — not exactly in line with AMC’s goal of empowering communities of color. Whatever programming the conference had around food would have to address sovereignty from that corporate approach.

“We were talking about ways to make food accessible and exciting and building communities around food,” says Lokhandwala, FERMENT’s co-founder.

Last year, the AMC held its first food-related track, Food Focus, that featured among other things, a Cambodian pop-up dining event organized by Chinchakriya Un, an artist and chef who creates spaces to share personal narratives through food. The dinner was held at New Center Park and hosted 250 visitors. Money was raised for Un’s family’s village but at the same time, produce was being harvested by Earthworks urban farm, storytelling around culinary traditions and trauma were taking shape, and young chefs got the chance to learn from veteran cooks.

Anya Peters, whose New York-based popup and catering, Kit & Kin, centers around Trinidadian and Jamaican food traditions, was among the chefs brought on to collaborate on last year’s effort.

This year, on top of preparing a popup dinner, Kit & Kin will emphasize the importance of intergenerational learning through cooking classes with her grandmother and mother by her side.

“Last year at the AMC a really big paradigm shift for me was learning from Char (Un)… when I went to school, I was French-trained, all my instructors were white and male. They didn’t know how to teach, they just knew how to cook. Here, I was seeing a matriarchy in the kitchen, learning from our elders and making this space to connect and be inspired,” says Peters.

For Dream Café hours of operation and a complete schedule of meal service during the Allied Media Conference, visit www.alliedmedia.org/dream-cafe .

Editorial notes: Tostada Magazine works in partnership with Allied Media Projects, a 501c3 tax deductible organization, whose mission is in support of art, media, and technology projects working toward social change. This piece is originally published in Riverwise, a community-based magazine created by a team of authors, writers, photojournalists, parents, grandparents, students, organizers, activists, artists, educators and visionaries in Detroit. For more information on where to find Riverwise, click here.

Both Tostada Magazine and Riverwise are supported by the Detroit Journalism Engagement Fund, a project of the Community Foundation for Southeast Michigan, that’s working to increase quality journalism and help better inform communities.