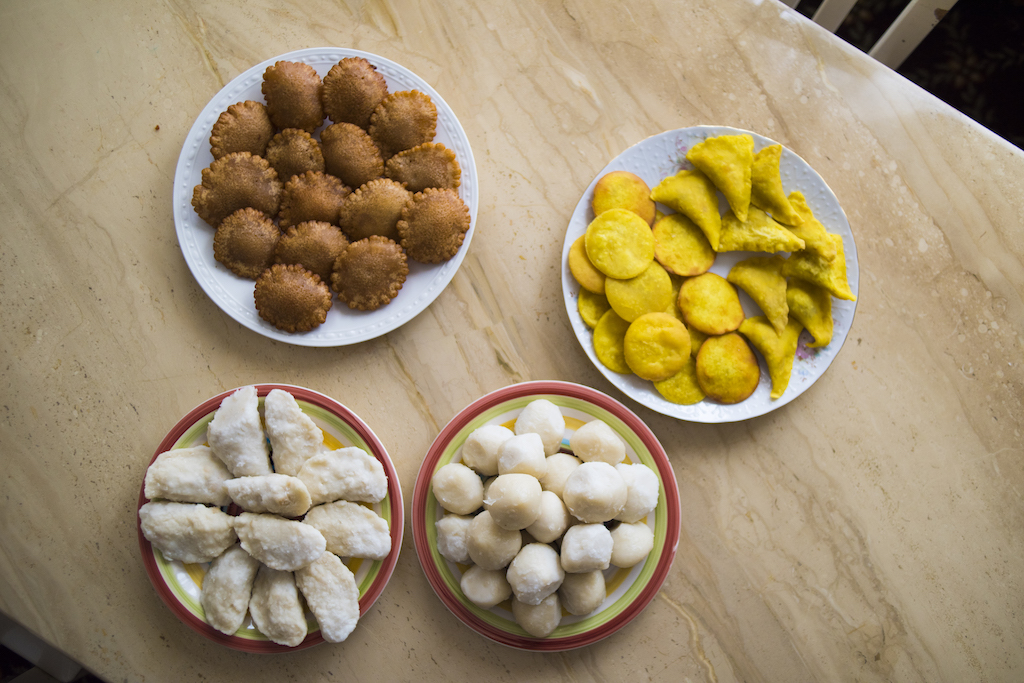 In the kitchen of our Detroit bungalow, I remember my dadhu (dad’s mom) leaning over a cast-iron skillet and dropping dollops of guror handesh batter into sputtering oil. Hand on hip, she waits for the masses to puff up, frill, and turn a deep shade of bronze. Today, she’s older and unable to make pithas but still offers her two cents. These days, she’s playing food critic as she samples the ones my mom or aunts prepare. Along the way, she complains about the texture, sweetness, asks how long they were kept in the oil, and throws out suggestions for the next batch. By her standards, guror handesh batter must have a pinch of salt and, most importantly, be mixed by hand.

Guror handesh is a type of pitha, or traditional rice cake. Pithas are found across South Asia, in India and Nepal, but have a distinct presence in Bangladesh, where my family emigrated from to Detroit in the mid-1990s. Versatile and practical, pithas are eaten as full meals, snacks, or dessert. Some are complex, resembling flowers and are overwhelmingly sweet, while others are sturdy and compact, perfect for dipping into stew.

While pitha-making has always been a staple in my household, it’s not a tradition that I’ve personally taken part in, aside from helping out here and there. So for research and a broader perspective, I sought the insight of others within the Bangladeshi diaspora who do make them.

Dina Begum, a British-Bangladeshi cook, food writer, and author of Brick Lane Cookbook, offered me a little history. She tells me that traditionally, pitha are synonymous with winter in Bangladesh and connected to Nabanno, which means New Rice — the winter rice harvest.

“The art of pitha-making goes back generations. Bangladesh is an agrarian country and rice is our staple grain. Communities are built on rice, from the landowners to the growers. It’s an essential part of peoples’ livelihood,” she says.

Nabanna occurs in the Bengali month of Ogrohayon (November – December). During this time, rice is celebrated and newly husked rice is ground to make pithas. There are fairs, music festivals, and traveling theaters, or Jatra, said Begum. And across the diaspora, rice is rooted in daily diets. I grew up eating it with various types of curry two, sometimes three, times a day.

Pithas have been popular in the Bengal region, both West and East, since before the 1947 Partition of Bengal and are very much ingrained in Bangladeshi food culture today, Begum said.

“I would go so far as to say that good pitha-making is equivalent to French patisserie (making) in that some of the varieties can take years to master,” she says. 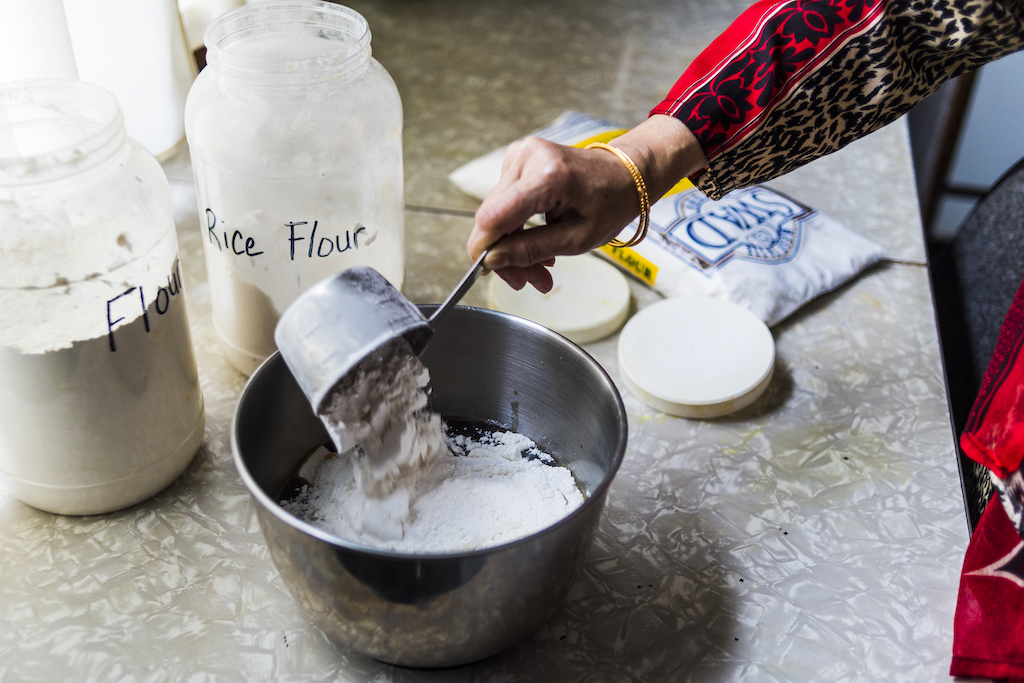 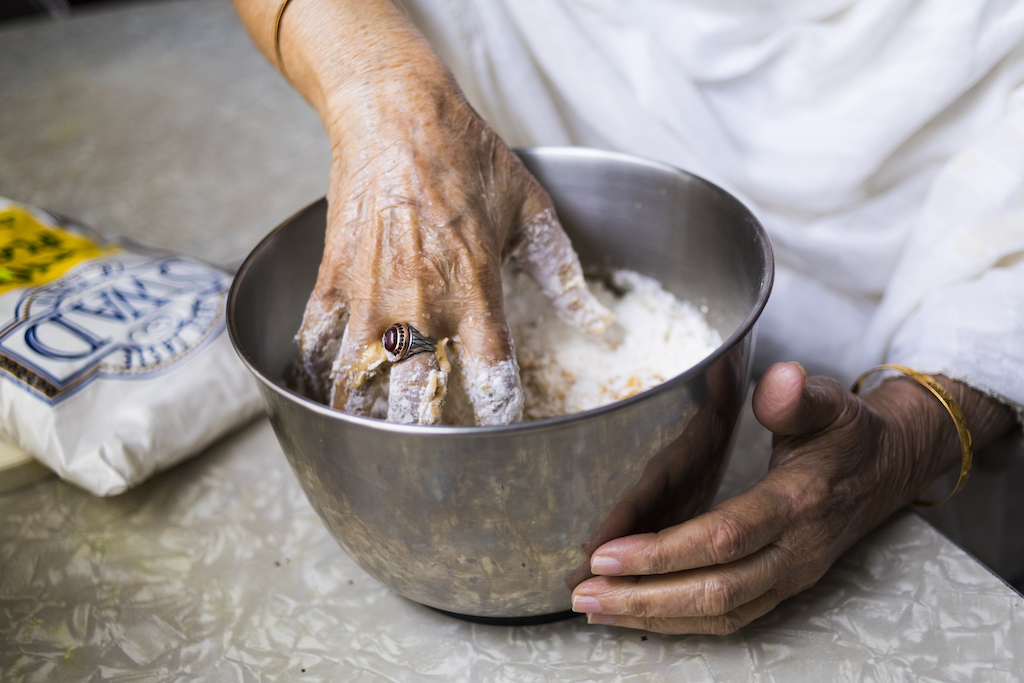 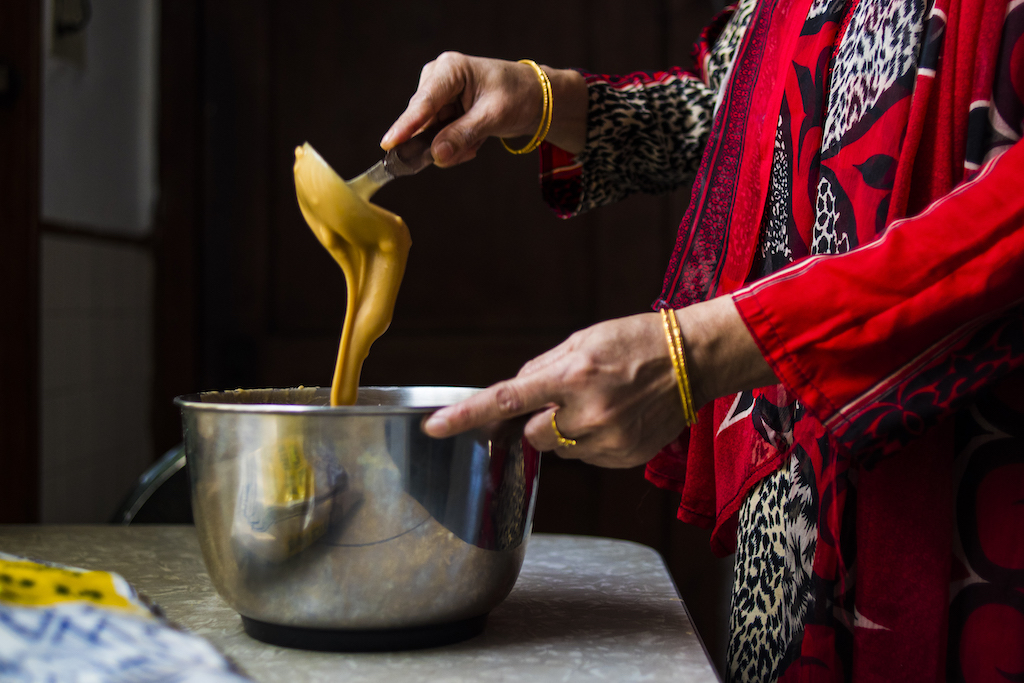 I’ve seen it with my own grandmother when she’d employ special techniques like adding rice and all-purpose flour in distinct proportions, without measuring tools and by instinct alone, and crimping the edges of narkel (coconut) pitha to create rows upon rows of half-moon pastries.

I also spoke with Rifat Farzana Hofer, who was born in Bangladesh and moved to the U.S. at seven years old and now lives in Germany. She tells me that she started making pithas as a teenager. Before gatherings, she’d witness her mom and aunts station themselves in front of the TV, and stamp intricate patterns, like fish and leaves, into pakon pitha dough — a simple rice flour, milk, and ghee (clarified butter) concoction that also happens to be Hofer’s favorite type of pitha.

There are no set recipes for pitha. Styles and techniques vary across families and regions in Bangladesh, including names and minor ingredient changes. But the base is generally the same. 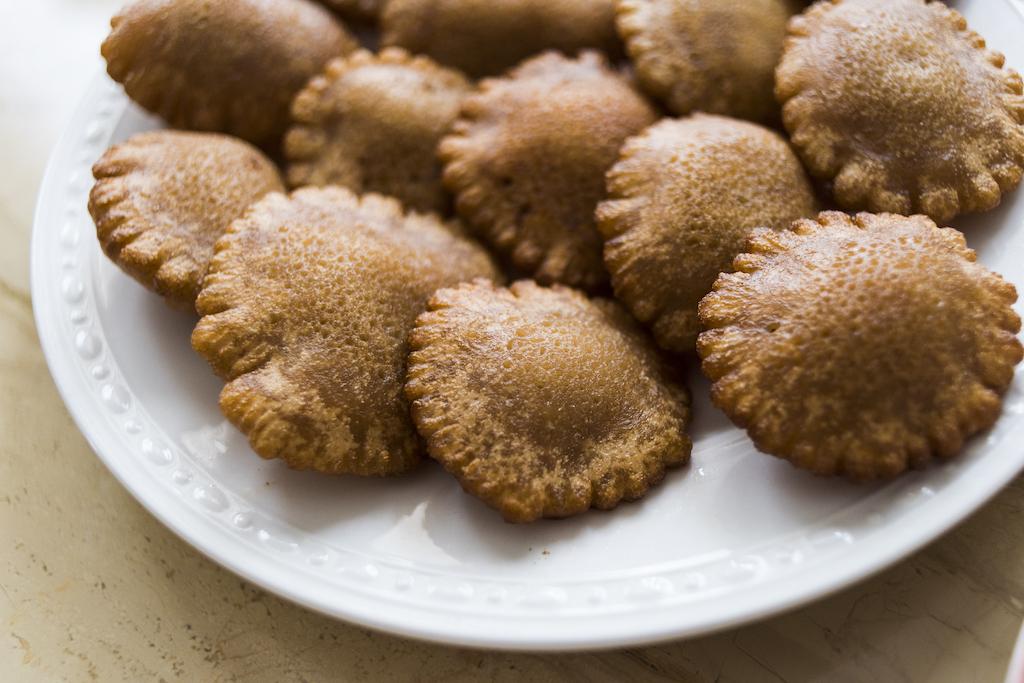 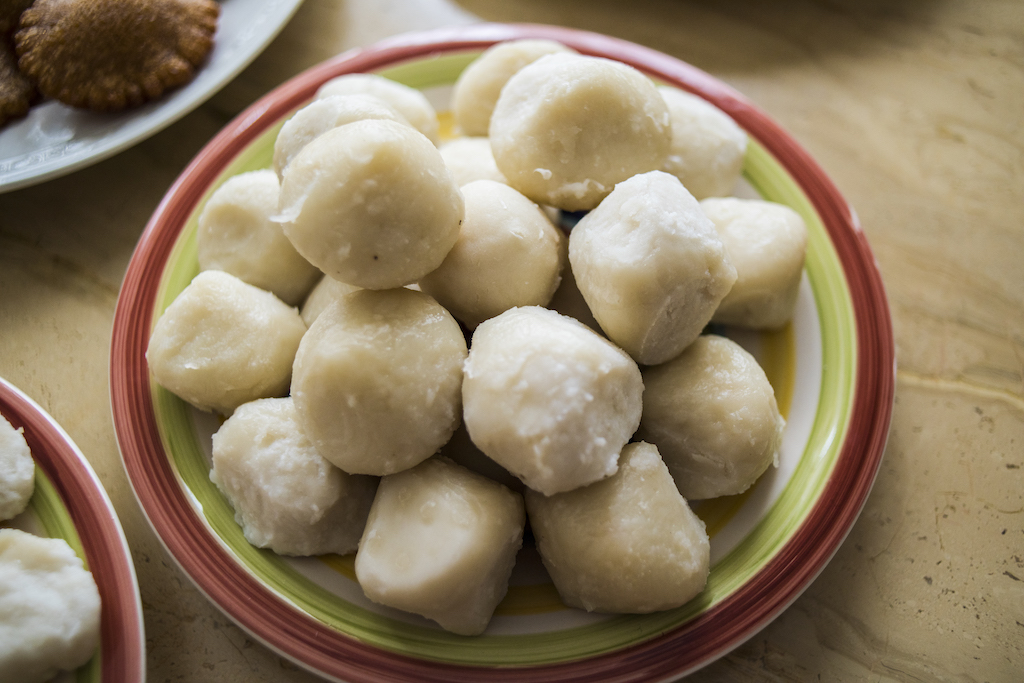 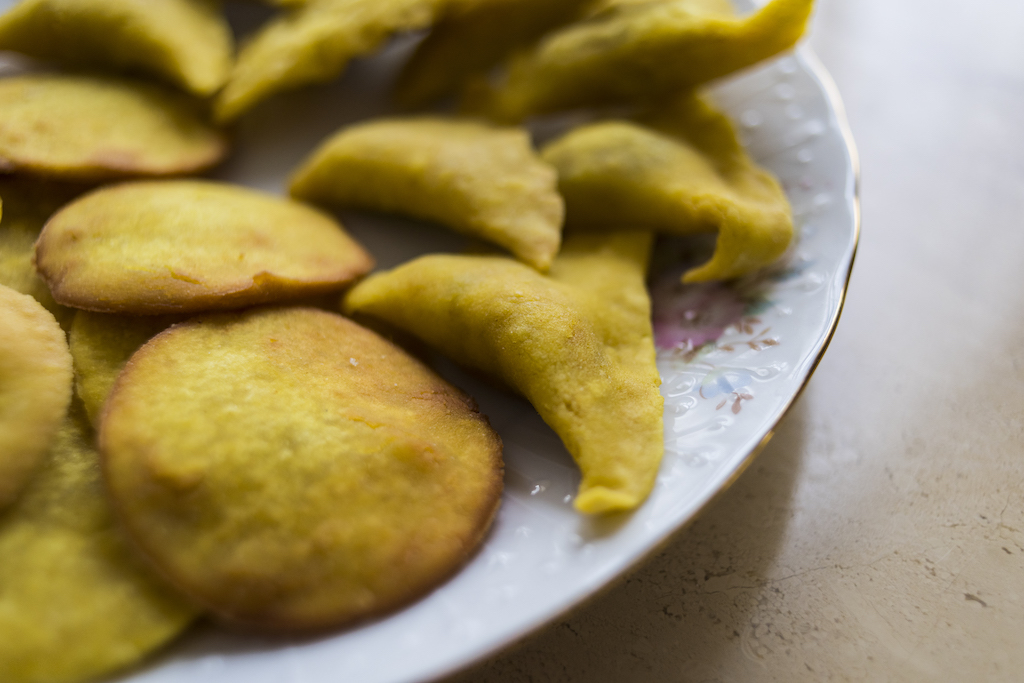 “Molasses and coconut are the most popular (ingredients) along with reduced milk. Spices are used sparingly to allow the rice to shine. Savory ones include turmeric, ginger and fresh herbs such as coriander in the batter,” she says.

As kids, my cousins and I would eat the savory variety — nuner pitha, or yellow pitha, as we called them — with ketchup. Rolling the neon colored dough across our kitchen table, my grandmother let us cut out stars and hearts.

There’s nothing glamorous about pithas, but they’re deeply familiar. Pithas are home cooking. They’re comfort food. And, based on my experience and those of many others, they’re crafted by women.

Pitha-making is a social affair just as much as it is an art form and a science. In the U.S. and England, pithas are found at festivals, weddings, religious holidays, and even “pitha parties,” where various types are made alongside borthas (mashes).

“I mean, who doesn’t see a pitha and get happy?” says Hofer.

While people like Hofer and Begum are seeking to uphold the tradition of pitha-making, it’s difficult to say whether the practice will endure.

“Outside of Bangladesh, it’s very hard to keep pitha traditions going. People are so busy with their everyday lives,” adds Hofer.

Making pithas is an hours-long endeavor, requiring time, energy and finely-tuned technique. So most often, it’s reserved for larger occasions or made in bigger batches to be frozen and eaten over time.

“The secret (to upholding the tradition) is to learn from what I call ‘pitha masters'” — people like my mother and maternal grandmother who have spent a lifetime perfecting their recipes and who can create almost identical batches without the aid of written recipes or instructions,” Begum says.

According to the Pew Research Center, Metro Detroit has the third largest population of Bangladeshi-Americans in the U.S., after New York and Washington D.C. Hamtramck alone accounts for 75 percent of Michigan’s Bangladeshi population and has experienced rapid growth in the past few decades.

Many Bangladeshis have blue-collar jobs or own small businesses, like restaurants and groceries, along Conant Avenue in Detroit, just north of Hamtramck. At any Bangladeshi eatery along the commercial strip, you’ll find butter chicken or chicken tikka masala on the menu, but you won’t find pithas.

A few months ago, James Beard award-winning food writer Mayukh Sen wrote for The New York Times’ an article about Korai Kitchen, a New Jersey-based restaurant serving authentic Bangladeshi home cooking, like borthas (mashes), curries, and an assortment of vegetarian and non-vegetarian options. It’s a stark contrast to the Bangladeshi owned restaurants found across the country, in New York and Southeast Michigan, with largely Indian inspired cuisine. When I showed my mom the Times piece, her face lit up.

Sen writes that Korai Kitchen is built on an “uncomplicated” kind of home cooking that is nonetheless filled with “distinct flavors.”

Pithas exist along the same plane of comfort fare.

They’re straightforward, but simplicity doesn’t equate to blandness. Oftentimes, pitha serves as the foundation for other dishes. At its most basic level, choi pitha is comprised of water, salt, oil and rice flour. It’s rolled by hand and steamed, sometimes over a makeshift double boiler. You can eat chitoi pitha plain or with honey. I’ve seen my grandmother chop and fry them with a splash of oil, onions, cilantro, and salt. It takes hours to make the pitha itself but seconds to prepare the “stir fry” — all with a few key ingredients and rice at center stage. In my opinion, nothing tastes better.

When I asked Mahabub Chowdhury, owner of Aladdin Sweets and Cafe in Hamtramck, whether the popular eatery sells pithas or ever would, he seemed a bit surprised by the question.

The only exception would be patishapta pitha, a rice flour crepe with filling. Aladdin also sells jalebi — coils of deep-fried batter steeped in sugar syrup — and other types of mishti, or sweets, but these desserts are more common outside of Bangladesh. And oftentimes, they’re made by Bangladeshi women who have business arrangements with the area restaurants. Independently, many also sell rice and curries, to families who work full-time and are not able to make Bangladeshi food every day but still crave the taste of a home-cooked meal. Begum notes that the same occurs in London’s Bangladeshi community, where women have similar catering businesses.

“Women are the heart and soul of Bangladeshi food and cooking. Pitha-making has traditionally been the domain of women within families and a communal event where women get together to make them,” she said, “It’s a time to bond, share food and keep traditions going.”

Rahman is a 2018 graduate of Wayne State University, where she majored in English Honors and minored in Sociology. Rahman’s writing has appeared Hour Detroit, Model D Media, and The Edit — a New York Times newsletter for college students and recent graduates. She loves writing about food and culture, and highlighting the perspectives of underreported communities, like the immigrant neighborhood she grew up in. When she’s not writing, Rahman is a community organizer in the Detroit area and works with the Detroit youth chapter of the Muslim American Society, Muslim Interscholastic Tournament, and other nonprofits. Find her on Twitter @nushrat21