YumVillage owner and chef Godwin Ihentuge has built a brand around the concept of “African made, Detroit raised,” by combining his love for heritage, food, and community to bring people together for the best of both worlds.

Ihentuge opened YumVillage restaurant last year in Detroit’s New Center neighborhood after having a successful food truck with the same name for the past three years. Now, like others, he’s navigating business in a time of coronavirus uncertainties as a small business.

“This COVID thing has been very unfortunate but it has forced us to be a lot more creative in approach. Hold a magnifying glass to an industry that for quite so long we fought for,” he said.

He closed for the first week of April and reopened April 20 for carryout, making only $3,200 for the month. Ihentuge says that it wasn’t uncommon to take in $40,000 a month last year.

“Small businesses are out here dying,” he says. “As a person of color, I don’t have access to the same resources or resources in general as my friends,” he said. 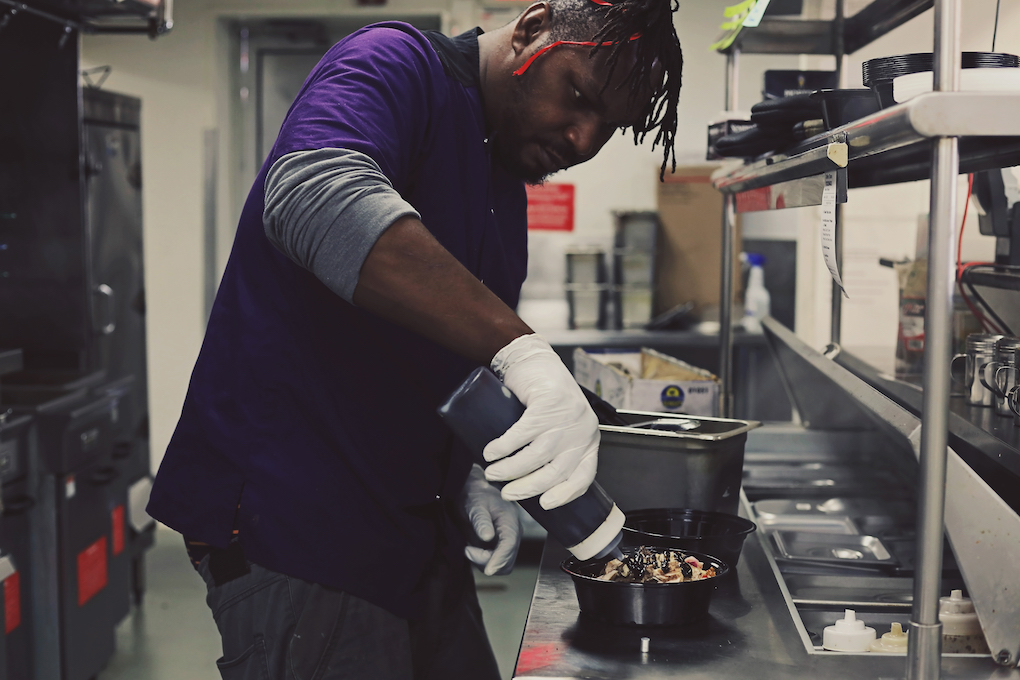 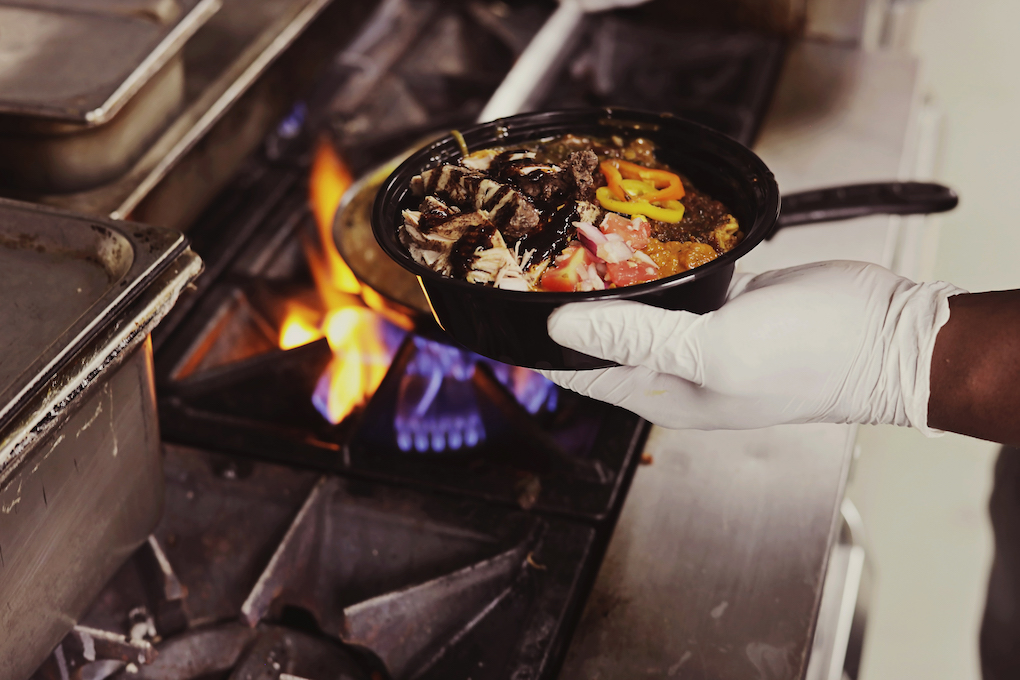 “I’ve been very fortunate. I’m 35. I’m a food truck owner and restaurant owner and operator… we’re not closed yet in the midst of the pandemic three months in despite what’s happening,” he said.

YumVillage started off as a consulting company for restaurants in 2014, that served as a marketing resource to match chefs with gigs or restaurants with underused space. In that capacity, he provided marketing, talked clients through recipes, and graphic design. Ihentuge hopes to continue providing this kind of support to restaurants as they navigate current uncertainties.

“So if you had underutilized space that you wanted to rent as a pop up you could,” he said.

The idea made it to the final five at Bizdom, a startup accelerator and mentorship program for people who want to launch businesses in downtown Detroit. He further developed the concept at Build Institute, which allowed Ihentuge to expand on his culinary skills by doing pop-ups instead and cooking with top-rated chefs like Jeremy Kalmus of Chef with Dining In The Dark Detroit, and Brendon Edwards formerly of Gold Cash Gold, and Jeff Rose, chef at C.A.Y.A Smokehouse Grill.

He then took out a loan from his wife’s aunt and his father to purchase his dad’s food truck in Florida and brought it to Michigan and later secured a grant through the Detroit Development Fund to open the brick and mortar at New Center.

“There are a ton of other Godwins out there, who weren’t where they are because they don’t know the right person. That could be me still,” he says.

Ihentuge’s father is a Nigerian software engineer who relocated to the United States when he was recruited to work for Michigan’s unemployment agency. Prior to coming to the United States, his father partook in the Nigerian Civil War. His mother is a Detroiter who works for the community Neighborhood Services Organization. His parents met in college at the University of Windsor.

His family lived briefly in Buffalo, New York before moving to Detroit. Ihentuge attended University of Detroit Jesuit High School and Academy. He then studied business and business psychology at Wayne State, while working at the cafeteria where he developed an interest in cooking.

As a Nigerian and African-American, food was a central part of their family. Both his parents cooked and he found it a way to connect to his roots.

“I really want to see a proper spread of the culture of diaspora, he says. “I want to eat food that’s indigenous to my culture.”

YumVillage has grown into an entrepreneurial hub, while simultaneously celebrating African cultures. The restaurant features different cultures through artwork, murals, and dialogue monthly.

Ihentuge’s podcast “Refrigerator Diaries” documented YumVillage’s inception and progress. It’s in its fourth season. In June he started leading virtual cooking classes sponsored by Yelp for people to cook along or purchase meals.

Ihentuge says his previous job experiences — as a district manager at Target to doing nonprofit work with Mosaic Youth Theatre — and being the son of an entrepreneur, has carried him through the pandemic.

“I have a different attitude about it. Those things are not normal circumstances. I feel like there’s quite a bit that’s necessary to survive. Even now I think to myself are those challenges needed?” he said.

Recently he teamed up with several other chefs and entrepreneurs to participate in the Pay it Forward: Power a Business & Feed the Homeless campaign, which raised more than $50,000 so that restaurant owners could continue earning an income while cooking and providing meals to feed Detroiters who’ve experienced disproportionate hardship during the pandemic.

This latest bit of outreach is just another example of how Ihentuge has incorporated community into every aspect of his business. He hires from the city and pay starts at $15.50, plus pool tipping. He campaigned for the Welfare Wage Campaign in Lansing and Washington D.C. to raise the minimum wage to $11 an hour for all. He hopes this current crisis doesn’t undo the progress he and other advocates in the restaurant labor movement have been making as of late.

Ihentuge says he’s a part of Detroit’s story because he grew up here, went to school here, and took part in its incubation.

“At the end of the day I’m a kid from Detroit, native Detroiter, for the most part, we came here when I was five, ate Gregg’s Pizza with everyone on Livernois. I came up through the Detroit system, WSU, and worked at different restaurants,” he said.

“It has been a joy to know that as a big as the world is, I still think Detroit is way bigger. There are still so many unearthed gems here that are waiting to be exposed. Just as part of Detroit’s story I am a part of Detroit’s incubation and collaborative economics.”

At the moment YumVillage has dine-in options with its partners. Ihentuge says it’s easier to manage smaller crowds with the new COVID restrictions to serve safely and without overwhelming the team.

“With new regulations, I don’t foresee us fully opening to the public until with certainty we can deliver the level of safety that is in line with our commitment to service standards. In the meantime, we are allowing certain people to dine in the restaurant for private events. This gives a higher level of control, comfort, and confidence to serve food and vibes with a smile and no stress.  We will continue to get regularly tested. Everyone on our team is regularly tested in alternative cycles every two weeks,” he said.

“Our biggest partnership is with Run 313. Every Tuesday from 6 to 8:30 p.m. they run their route and come and dine, 30 allowed inside at a time. We have a specific just plants combo that runners can get and members of the group get 5 percent% off their meals,” said Ihentuge.