Pizza delivery and carryout were a bright spot in the pandemic-era dining scene as folks sought the comfort food as they waited out months of lockdown orders, dining room closures, and uncertainty.

At a time when restaurants nationwide struggled over whether they could even keep their doors open, the pizza business thrived. According to Technomic, an industry research firm, pizza sales grew by just under 5 percent in 2020.

That doesn’t mean that pizzeria operators were immune to the many economic pitfalls that other sectors of the restaurant industry were dealt. Rising food costs, a widespread labor shortage, and the proliferation of delivery apps that rake in high commissions from restaurants also impacted the pizza business.

As part of our Anti-Gentrifiers’ Guide to Dining in Detroit, we profile Sicily’s Pizza & Subs, a stalwart shop in Southwest Detroit that has remained a beloved establishment for more than 30 years. Owner Ali Beydoun explains to us the many adjustments his business has had to make during the pandemic and his vision for the future.

The yeasty aroma of sourdough, garlic, and butter hits your nostrils as soon as you enter Sicily’s Pizza & Subs on Vernor Highway, just east of West Grand Boulevard. There’s a faint rumbling of the traditional conveyor pizza oven as you make your way to the cash register. 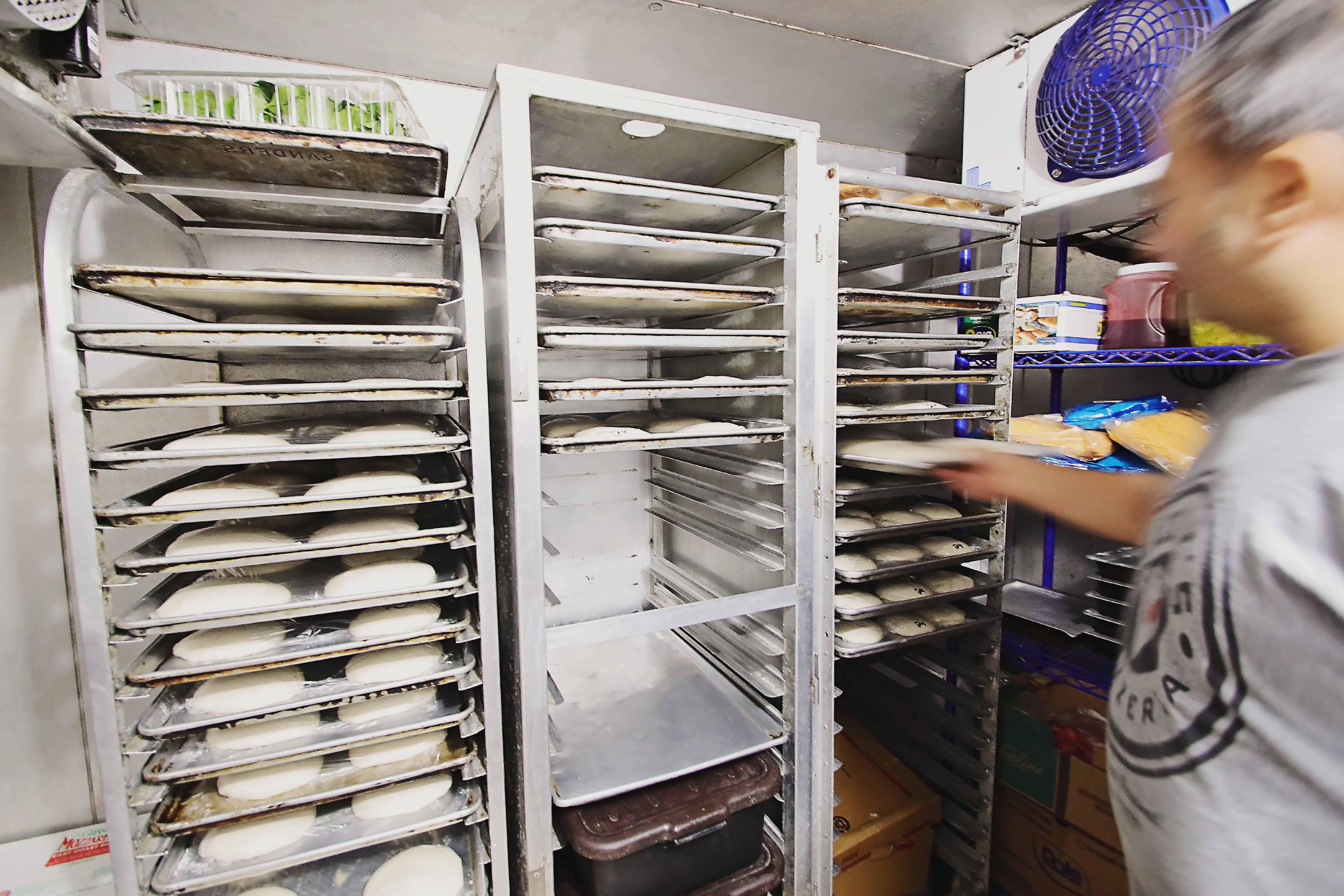 The sign on the glass separating customers and employees reads, “Thank you for the support. Please be patient with our team. We are busy and understaffed.”

Arguably one of the hardest-working members of the team at Sicily’s is the mother dough, but its work simply cannot be rushed.

She works out of an oversize plastic bucket in the back of the house, covered with a lid, and closely monitored to ensure that she’s comfortable. She happily bubbles in her work station, and her supervisors, owner Ali Beydoun and manager Robbie Hamoud, check on her throughout each day to ensure that she’s breathing properly, that she’s never too hot or too cold, that she’s had enough to eat.

“We have a mother yeast that we continue to use and that’s a shift that we made about five years ago,” Beydoun says. “We were conventional before then, and then we switched to natural fermentation sourdough stock, and that really adds to our flavor profile edge to our pizza.”

The dough-making process for the weekend rush starts on a Wednesday by taking some of that starter (Beydoun tells Tostada that this particular strain is believed to be hundreds of years old) and incorporating in equal parts King Arthur flour and water. Over the next couple of days, masses of dough are laid to rest undisturbed, covered in plastic on a countertop to proof, as the mother yeast gets to work at fermenting the mass. By the time it’s done leavening, the mounds have grown to the size of tires, and if you cut it open, you’ll see those little bubbles inside, which will lend itself to an incredibly airy crust that Beydoun prefers to cook on the more well-done side.

Once the dough’s ready, it’s then balled up and refrigerated, ready for its next life as a pizza.

Only Beydoun or Hamoud’s hands are allowed to touch the dough, as it requires an advanced level of expertise.

Beydoun says Sicily’s is one of just a tiny percentage of pizzerias across the United States that use this fermentation method to make pizza dough. Beydoun beams with pride when talking about his dough in the same manner as he does when doting over his teenage daughters.

As for toppings, Sicily’s uses California tomatoes that are crushed by hand to make a chunky, fresher sauce. The pizzeria favors fresh whole milk mozzarella instead of part-skim mozzarella. Halal pepperoni and hamburger meat are handled in-house. Customers are limited to up to five toppings in order to maintain the integrity of the fragile dough. The acidity of the extra toppings and oils could tarnish Beydoun’s beloved base, he says.

“We get some of our customers that ask for extra sauce, extra cheese, and extra toppings; by the time this pizza is made, boxed, and it gets home, it’s basically going to melt,” Beydoun said.

Before the pandemic, Beydoun already clocked a heavy workload of about 50 hours a week. He or Hamoud would arrive at the shop in Southwest Detroit around 10 or 11 a.m., check on the dough, and oversee his team of 14 — a crew of pizza makers, cooks and counter staff, in addition to delivery drivers. His fleet gave him the flexibility to take the occasional vacation, enjoy regular days off and spend time with his family.

But perfecting the art of an artisanal pizza delivery business has proved more challenging these days.

Since the onset of the pandemic, Beydoun doesn’t take any days off and works closer to 80 hours a week. His crew has shrunk down to a staff of just eight, including his three daughters and a nephew. He says being an immigrant family, he never wanted his daughters to have to join the family business, but these are unusual times.

Now, he plays the role of pizza maker and short-order cook to assist his slimmer team and helps to staff the phones when the front counter is slammed. Shortages on ingredients, especially from his larger suppliers, have become commonplace.

He also gave up on keeping drivers on staff and has transitioned to encouraging customers to place orders on its website. The site integrated with DoorDash to fulfill deliveries, which cuts into his profits.

“We used to do deliveries in-house, but ever since the industry shifted, that also shifted,” says Beydoun referring to the growing gig workforce. According to Forbes, the gig economy grew by 33 percent in 2020 alone, with 2 million new gig workers emerging in the United States.

All this, on top of making payroll, supervising his staff, keeping a handle on overhead costs, and overseeing the long-term vision for the popular pizzeria, where Beydoun knows most of his customers on a first-name basis. In 2018, Beydoun began construction on a proper dining area in a space adjoining the original building. He wanted to offer his loyal customer base with seating to accommodate about 40 that could serve as a community gathering space.

Beydoun has had his hopes of installing a wood-fired oven and developing a briefer menu of high-quality dishes rather than trying to offer a little bit of everything.

With a bare-bones crew and no end to the pandemic in sight, some of those plans are on hold indefinitely.

Sicily’s first opened in 1989, and Beydoun took over in 1999. His first hire was Robbie Hamoud, who grew up in the same neighborhood in Lebanon as Beydoun. Since then, the duo have worked to transform the space from a nondescript delivery spot to more of a destination.

“Ali is one of the hardest-working people you’ll ever meet,” Hamoud said. “I feed off his energy, and he’s always so focused on what he is doing.”

When renovations began three years ago, the pair worked together on rebranding, fine-tuning its specialty pizzas, and convincing longtime customers to become sourdough converts.

Earlier this year, Beydoun made the hard decision to ask his teenage daughters and nephew to help with operations.

“I have a great life, I’ve given (my family) a great life,” he said. “I’m a very successful businessman, but I know how demanding this business is, but a lot of these demands of a restaurant and then the immigrant business are kind of the doing of immigrants, because we have this DNA in us where we want to do everything. If I was probably born here, and for them, they might find an easy way to do it.”

Despite the uncertainties, Beydoun is hopeful for the future of Sicily’s.

With that sort of community support — and the hard work of that mother dough — Beydoun believes his pursuit of the perfect pizza is still in reach.

This article was made possible by the Detroit Journalism Engagement Fund, a project of the Community Foundation for Southeast Michigan, that is working to increase quality journalism and help better inform communities.