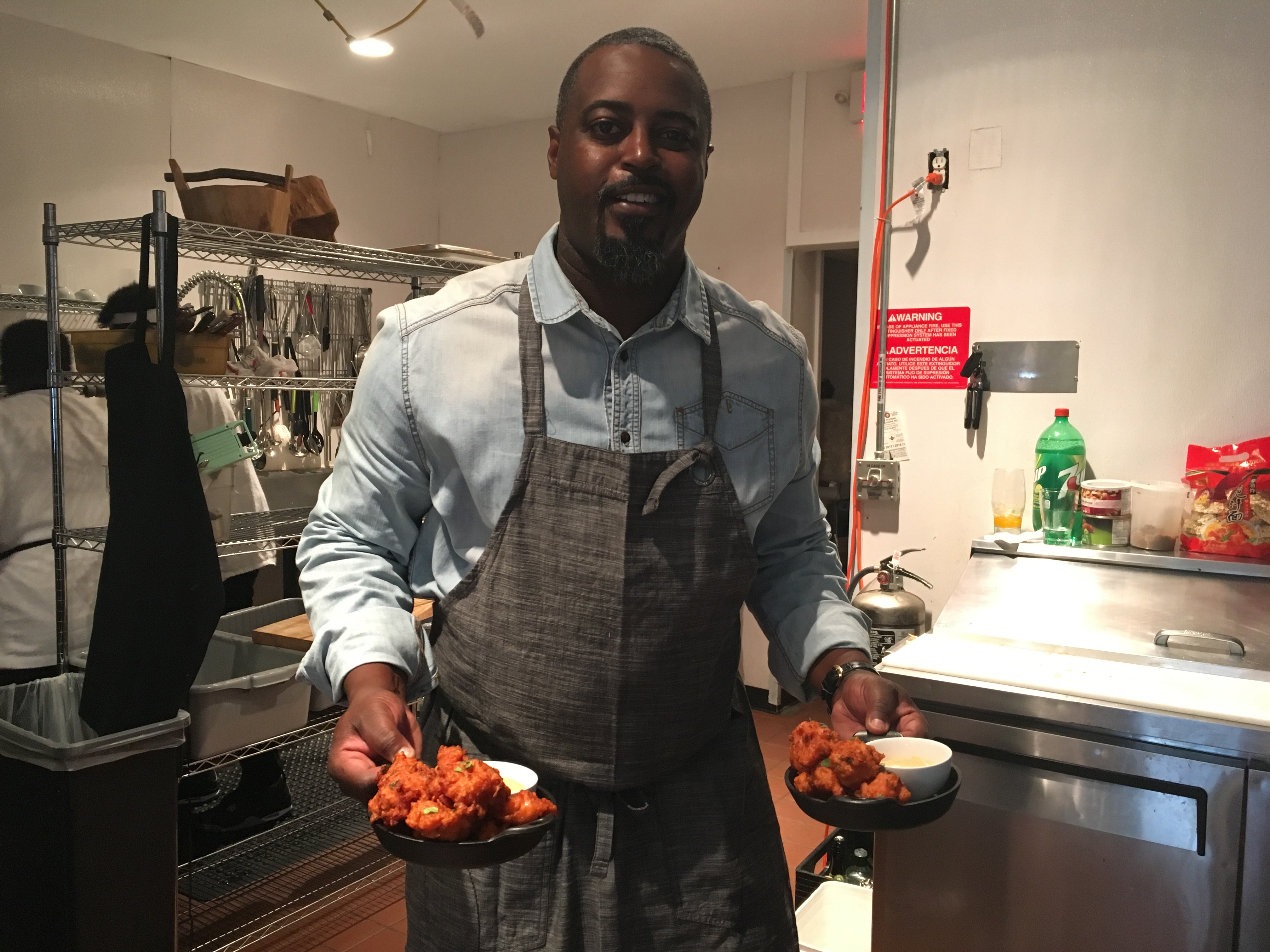 Something seemed to be missing at River Bistro, a new eatery in Detroit’s Rosedale Park neighborhood, when we visited during a media preview just before its August opening.

We couldn’t quite put our finger on it, until owner-chef Maxcel Hardy pointed it out to us. Absent from the order counter was that seemingly ever-present fixture in Detroit businesses: bulletproof glass.

“People around me said it was a bad idea to get rid of it, but I wanted to build trust in the community,” Hardy tells Tostada.

It’s details like that lack of a physical barrier between customer and kitchen, the cozy dining room’s pair of communal tables and the restaurant’s approachable, yet inspired menu that set River Bistro apart from the competition.

That it’s situated in this west side neighborhood just blocks away from where Hardy – a lauded chef whose career has spanned NYC and Miami and has included a celebrity clientele – grew up in is no mistake either.

While the focus of Detroit’s dining scene over the past few years has been dominated by “farm-to-table” small plate concepts concentrated mostly in greater downtown, Hardy decided to buck the trend for his first restaurant and plant roots miles away from the hype.

Instead, he’s building on a growing trend among millennial diners, who increasingly prefer more affordable carryout or casual options to more formal sit-down (and pricey) eateries – all without sacrificing on quality (prices start at $8.95 for lunch entrees and top out at $16.95 for a BBQ short rib dinner). And he’s doing it in a neighborhood that may not have the “hip” label, but where Hardy is betting will resonate with locals who would rather eat closer to home.

“Detroit is kind of a grab-and-go city, but here we want you to have a nice experience, too,” Hardy tells Tostada. “We want to be that balance.” 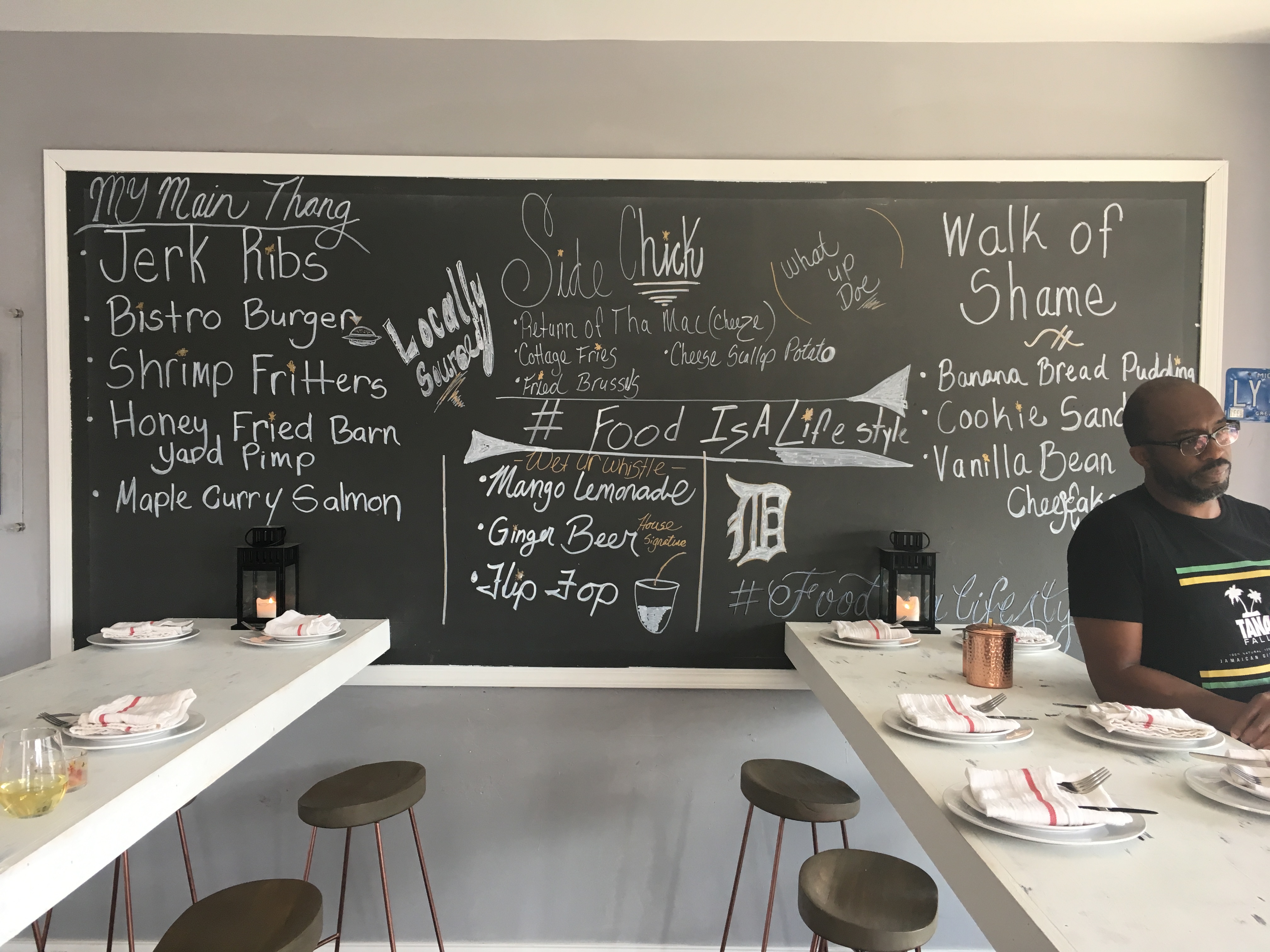 As for the menu, Hardy steers clear of fleeting fads and turns to comfort foods familiar to the Detroiter palate, and he does so while eschewing the stereotype that restaurants in the city’s neighborhoods must be all-fried-everything.

Instead, Hardy blends his family’s Bahamian roots, “low country” comfort food and recipes from his grandma’s kitchen. That means using ingredients that uplift one another like thyme, ginger, cilantro and Scotch Bonnet, a fiery red pepper native to the Caribbean to add to mainstays that diners gravitate toward.

The result, as exemplified by the bistro’s signature jerk ribs entree, is a complexity of flavors – each complementing each other. The tender ribs pack plenty of heat and are balanced by an Island slaw, savory plantain chips and Chef’s own sweet and tangy BBQ sauce.

Hardy offers other classics like fried chicken, (which he calls the “Barn Yard Pimp”), a Bistro Burger and shrimp fritters – but all with an eye for presentation and quality. The chicken, for example, is infused with honey, creating a sweet and crunchy exterior with a juicy meat and for dine-in customers is served in a rustic wooden basket. The burger is topped with a house-made jerk mayo, avocado and pimento, as well as that mouth-watering slaw. And the fritters are made with rock shrimp, a nod to Hardy’s Caribbean heritage.

As for dessert, dubbed the “Walk of Shame,” he takes cues from his grandmother, with a decadent banana and white chocolate bread pudding and draws from his time in Miami’s diverse Latino communities with a caramel-drenched churro plate.

River Bistro offers other rarities for Rosedale Park like weekend brunch service, a sleek tasting table in the back for private parties and delivery – all undoubtedly welcome additions to the neighborhood.

If you’re starting to pick up on Hardy’s forward-focused touches, it has a lot to do with his early exposure to the culinary world.

The 33-year-old restaurateur grew up on Detroit’s west side until the age of 12, when he and his mother moved to Tampa. It was in Florida where he discovered his panache in the kitchen as a student at Wharton High School’s culinary arts program.

As a teen, Hardy hosted catered special events and gave himself the name “Chef to the Stars” on fliers, perhaps foreshadowing his future as a personal chef for the likes of former NBA star Amar’e Stoudemire and the Prince of Dubai. Following his studies at Johnson & Wales University, he quickly climbed the ranks, working at a swanky country club, appearing on Food Network’s “Chopped,” co-writing a cookbook with Stoudemire and hosting a series of dinners in Harlem and Detroit that highlight the talents of black chefs.

Meanwhile, he had his sights set on returning to the Motor City, where he started hearing buzz about the emerging food world. Last year, as he explored how he might make his reentry to Detroit, he hosted an elegant outdoor dining event to a sold-out crowd at Oakland Avenue Urban Farm – using ingredients sourced on-site and utilizing the help of local youth.

He returned to Motown in January, already with plans to launch Coop, a Caribbean/Asian chicken spot, which is supposed to open sometime in October in a forthcoming food hall made of shipping containers in Midtown. More recently, Hardy’s latest book published – “The Marley Coffee Cookbook” – which he collaborated on with Bob Marley’s son Rohan. Next year, his most ambitious project, Honey, a 120-seat, African-inspired full-service restaurant is said to open next year in the District Detroit, the entertainment area surrounding Little Caesar’s Arena.

(Photos from top: Chef Maxcel Hardy in his kitchen at River Bistro preparing to serve his honey spiced chicken wings; the dining area; a close-up of the wings. Photos by Shahid Syed and Serena Maria Daniels)