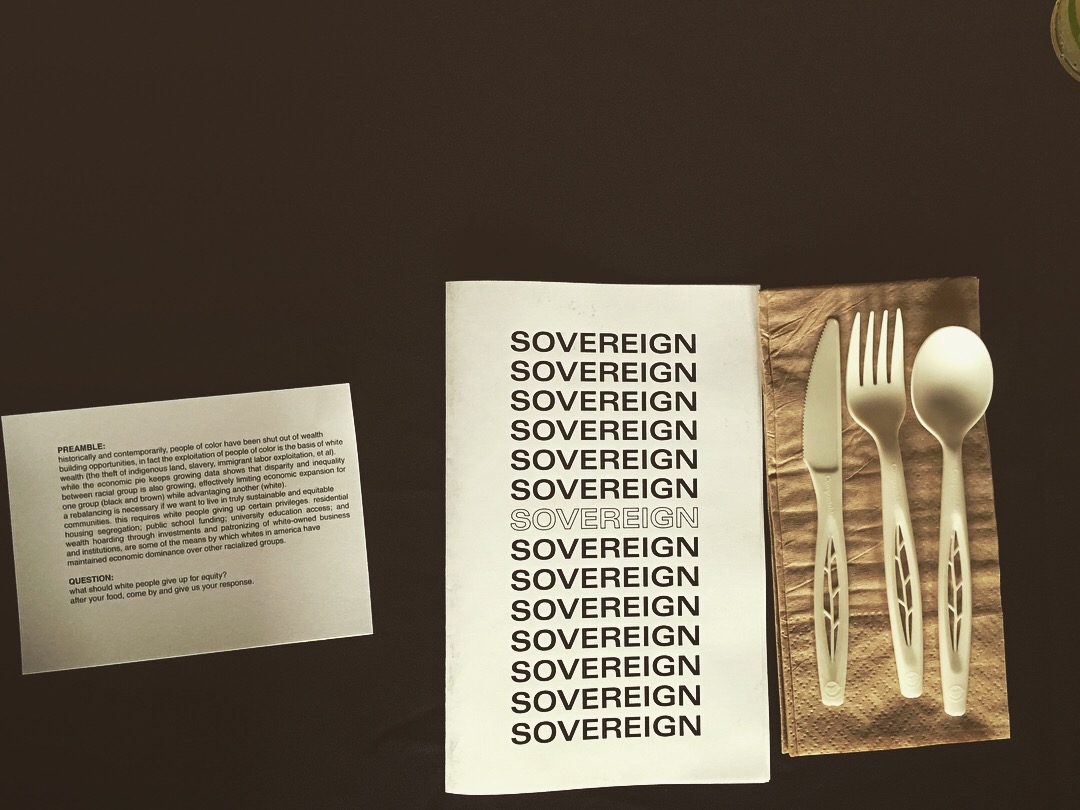 Welcome to “Feed the Movement,” Tostada Magazine’s new occasional series that uses food as a lens to dig into issues around social justice. We’ve long known that food serves as a means to feed civil rights movements — from the women in church kitchens who’ve nourished marching activists to the cooks who use food to fight cultural erasure. Here, we highlight fundraisers, events, and other efforts in which food is being used to address social inequality. Our first “Feed the Movement” piece reflects on how chef Tunde Wey asks white diners to give up their privilege to make space for black and brown people.

In one of the first conversations I had with Tunde Wey, now a renowned chef known across the country for hosting dining events that center around race and inequality, he tried to explain to me the notion of white spaces.

Wey, a former Detroiter who now resides in New Orleans, was sharing details about his forthcoming “Race in America” dining series that he launched in 2016. Guests would be urged to engage in conversations about race, not exactly a polite topic for a dinner party, at least not in the framework of “white spaces,” he explained.

Just about every space in the public sphere, he went on, was created for the enjoyment of white people — whether it’s around the water cooler at the office or at dinner at a fancy restaurant. If you’re black or brown in these places, you look both ways to make sure there aren’t any white people around before venting about the latest pendejadas from Becky in accounting.

Instinctively, I got what he was saying. After all, it’s only in the privacy of conversations between friends that black and brown people often feel comfortable enough to unload on each other the struggles of being marginalized in America. Out in the white world, however, we code switch, lest we be dubbed angry SJW’s.

Over the years I, along with just about every other food writer in major cities, have kept tabs on Wey as he’s traveled the country challenging diners to confront their privilege. Earlier this year, for example, he made national headlines when his Saartj food stall in New Orleans asked white customers to address income disparity by charging them $30 for a plate of his Nigerian cuisine, while non-white folks paid $12.

I was among the throngs of reporters who wrote about that project. I even booked a flight to NOLA to sample the food firsthand and listen in on customers’ reactions to Wey’s pitch.

It wasn’t until I attended the latest iteration of Saartj this month in Hamtramck, Mich. (surrounded by Detroit) that I finally felt I could articulate what he meant years ago about white spaces. It’s not that I had never acted in response to this reality. Afterall, as a Chicana whose ethnic origin and nationality is questioned on a near daily basis, I’m always mindful of my tone if I’m out gossiping with friends or family. 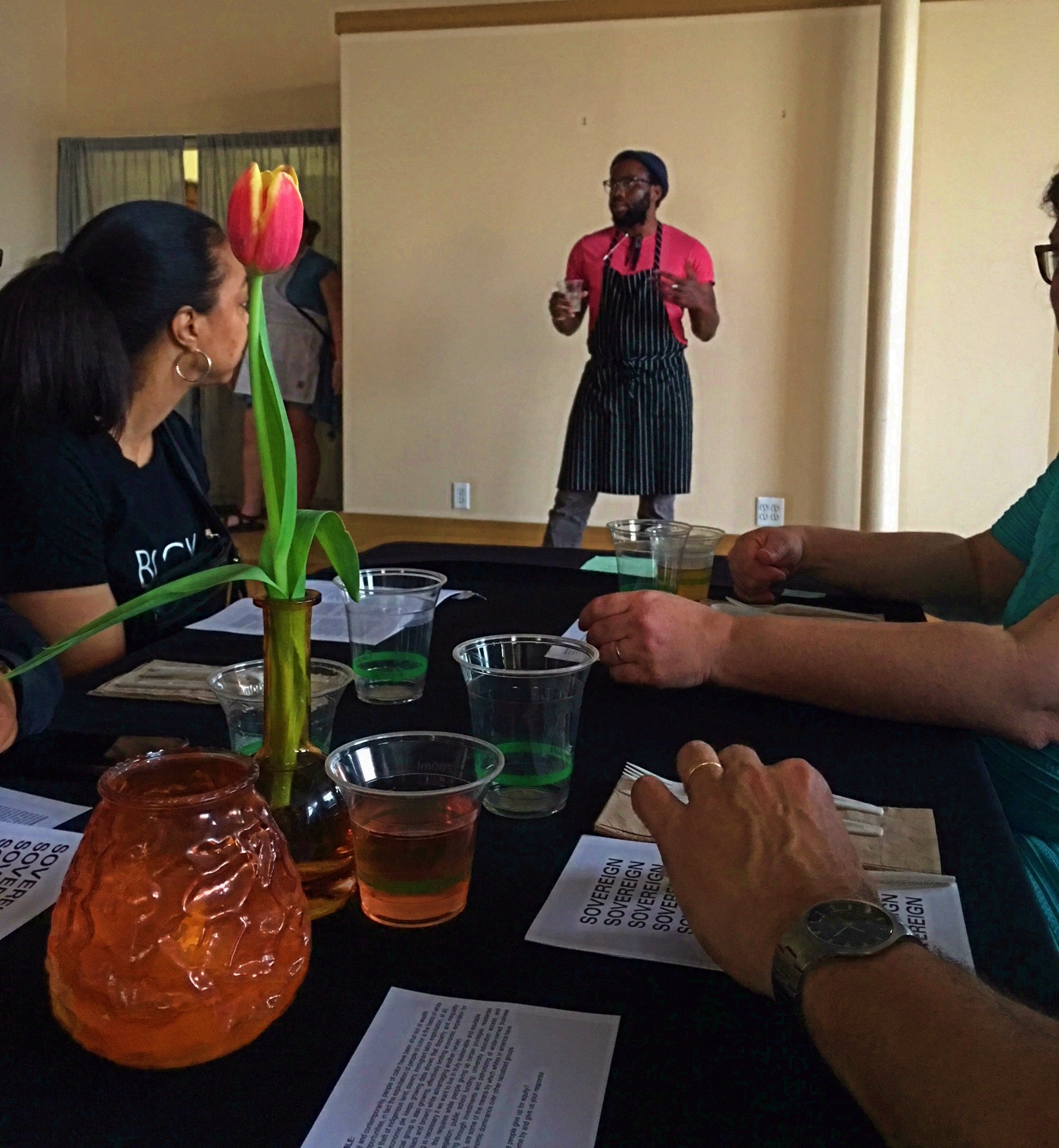 But as diners filed into the Bank Suey community arts space for the 7 p.m. call time and were seated according to letters each guest picked out of a hat, this dynamic became crystal clear. A black guy who sat across from me dominated much of the conversation as courses of plantains, spicy duck soup, and roasted duck made their way to our table. At our table, the topic of conversation was mostly centered around our experiences in our respective school systems. I chimed in here and there about feeling invisible, trying to fit in in predominantly white schools in Portland. Other guests commented on the white or Euro-centric curriculum that ignored the histories of African Americans, Latinxs and indigenous people and the impact that had on them. The black mother sent her kid to a wealthy suburban school district. The DC mother forsook her neighborhood, predominantly black school for a more diverse charter when it was time for her child to enroll in kindergarten.

At one point, the black mother commented how it never fails in social settings like these, where like-minded folks willing to shell out $50 for pop-up tickets, will inevitably compare notes with knowing eyes about their racialized upbringings.

True, most of the racialized guests had had these conversations, but the difference here was who were having them with. Several diners, for example, noted that they had never had dinner in a white household. And even those of us who had had these exchanges in mixed company often times the difficult questions were avoided.

Naturally, Wey would have none of that. It wasn’t enough for the white guests to nod and listen. No, this was about redistributing the power structure, even if only for a couple of hours.

He achieved this in a few ways. For example, that assigned seating was by design. All of the PoC guests picked the letter F and the white diners were given all N’s. A handful of the white guests were handed aprons instead of seats and were asked to be servers. Of the three tables set for the event, two consisted of mostly PoC guests, save for one or two white diners. A third was all white. The mixed tables were served the best, freshest dishes. The white table received leftovers.

Each table setting included a small chapbook entitled Sovereign that included readings from Wey, Malik Yakini, co-founder of the Detroit Black Community Food Security Network, and Devita Davison of the nonprofit FoodLab Detroit. Yakini and Davison would make appearances at other Saartj dinners. Along with the pamphlet, a preamble read in part:

historically and contemporarily, people of color have been shut out of wealth building opportunities, in fact the exploitation of people of color is the basis of white wealth (the theft of indigenous land, slavery, immigrant labor exploitation, et al). while the economic pie keeps growing data shows that disparity and inequality between racial group is also growing, effectively limiting economic expansion for one group (black and brown) while advantaging another (white). 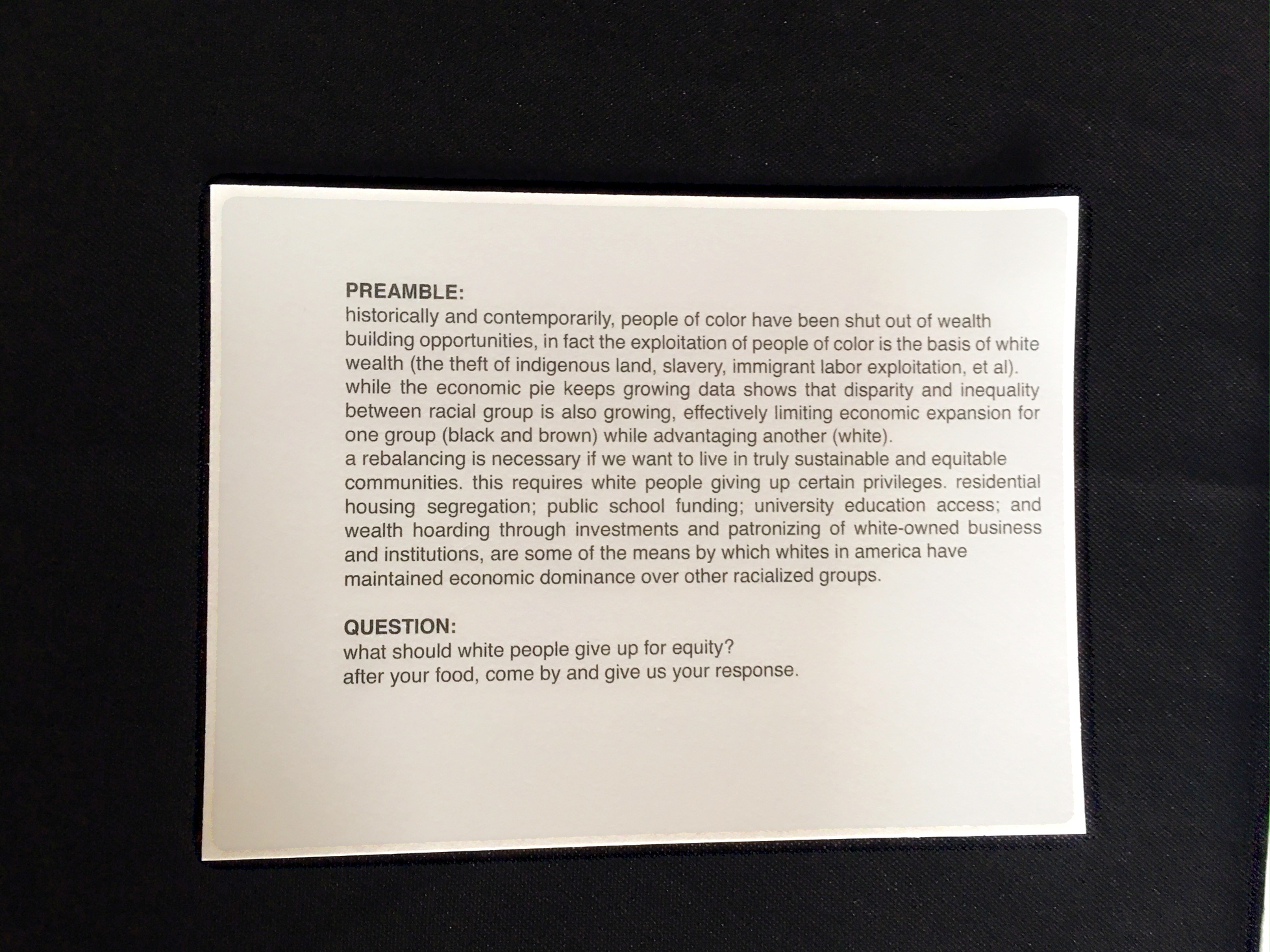 The preamble was followed by a question that Wey posed to the dinner party after our tables were cleared: what should white people give up for equity?

Across the room were a lot of I promise to listen mores and I’ll work harders, as well as some pie-in-the-sky should happens at a policy level. To each response, Wey challenged the white guests to dig deeper. Listening does not require giving up anything, he pointed out. Working harder at the fill-in-the-blank nonprofit advocacy group is all well and good, he said, but at the end of the day, it just means more money in your pocket. The DC mother shared her story about sending her kid to the charter school and quickly the focus turned to, “why don’t you send your child to the all-black school?” (Editorial note, I asked that question).

There wasn’t a clear answer.

But it got people talking and thinking. In the days after the dinner, I noticed one of the white guests turned to social media with follow-ups to the question. The response still seemed removed from what he, as an individual, could do to address inequity.

It’s a hard question to ask of an individual, in part, because it requires a person to acknowledge their own place of privilege. But it’s a question that Wey will nonetheless continue asking of his dinner guests.