Philadelphia: The City of Brotherly Love and home to twin brothers who had a vision to help boost Black-owned businesses and circulate dollars within the community.

Unlike other delivery options such as Grubhub or UberEats, Black and Mobile sets itself apart by servicing Black-owned restaurants exclusively to provide them with visibility, exposure, and a stronger customer base. Customers can order from nearby restaurants both on the website and from its mobile app (currently available on iPhone).

Although the delivery service has its roots in Philadelphia, the Cabello brothers wanted to push their business into other major cities around the country. Soon, they would have the chance.

Adrian “Ace” Humphries met David Cabello in April 2019 during a chance encounter at a local Philadelphia restaurant. Humphries, a Detroit-native, spoke with David about the venture and the desire to expand.

Cabello pitched the idea to Ace to bring Black and Mobile to Detroit. It was then that Humphries knew he had to get on board and thus, a partnership was born.

“Because (Black-owned business) is really like my lifestyle, I spend my money with Black people, I saw the potential in it,” Humphries explains.

The rest was history.

Humphries knew Detroit was the next hub for Black and Mobile. In a city inhabited by majority African-Americans, Detroit continues to be impacted by racial and economic inequality. Although Detroit faces its own challenges, the Black community has been instrumental in uplifting the city’s culture and in its comeback, creating a greater opportunity to support ventures like Black and Mobile.

Its impact in the Motor City has been immediate. 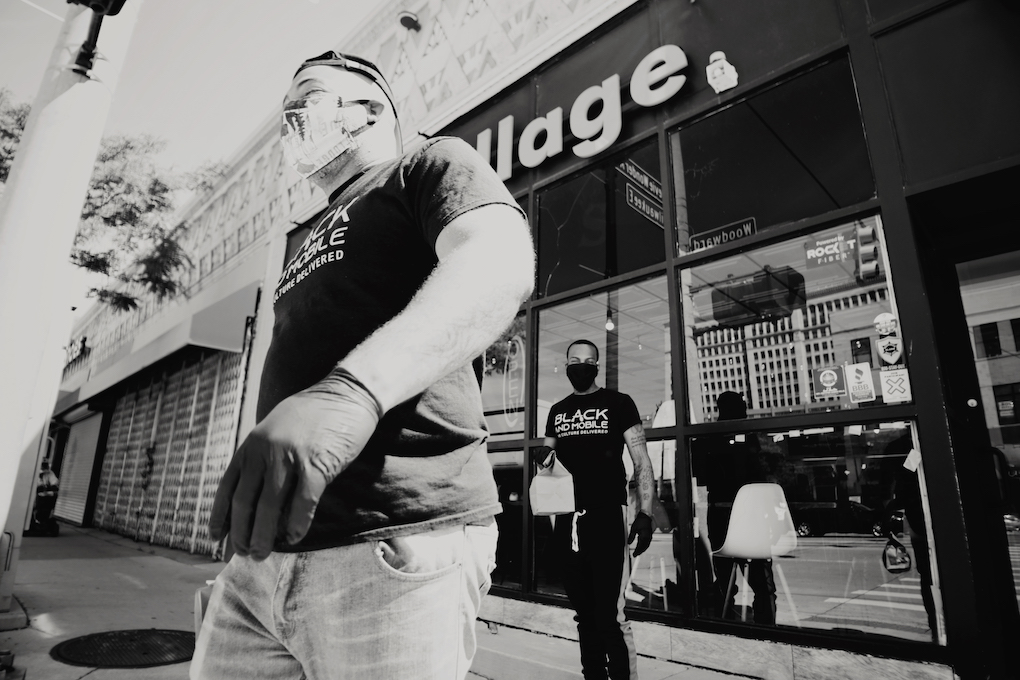 “New restaurants can call me or go online and sign up,” Humphries says.

Black and Mobile has also recently taken part in the Pay It Forward: Power a Business and Feed the Homeless campaign. The Detroit fundraising initiative was established in the earlier months of the pandemic to pay restaurants owned by people of color to cater meals for the homeless, those on the frontlines, and other groups who’ve been particularly impacted by the crisis. As more and more residents have been turning to delivery in lieu of dining out over the past few months, Black and Mobile has been able to share its services and deliver meals on behalf of the campaign.

“We are growing at a decent pace. We are getting more businesses to bring us exposure, but we don’t have a lot of visibility only because of the lack of interaction with people,” Humphries says.

As Black and Mobile continues to grow, the team looks to take their business to the next level.

Currently, Philadelphia and Detroit are the only cities serviced, but that is all about to change. Black and Mobile plans to continue to expand into other large cities nationally, with Atlanta next on its horizon.

“We launch in Atlanta on July 12, then it’s L.A. after that,” Humphries says. The Los Angeles launch date is currently in the works.

As for the future of Black and Mobile, expanding into major cities across the United States is just the beginning. Humphries says he can see the company growing its service area internationally.

Editor’s note: The headline of this article has been clarified to reflect that Black and Mobile is the first online delivery service that delivers from Black-owned restaurants.

Megan Kirk is a freelance writer from Detroit with a passion for local news. A recent graduate of Michigan State University, she has been featured in Opportunity Detroit as well as The Michigan Chronicle.