It’s 3 p.m. on the day before Valentine’s Day at Baobab Fare in New Center, one hour before the inaugural service at the East African restaurant. Nadia Nijimbere measures out some salt into a plastic deli container, adds water, and mixes them together. She pours the mixture into a skillet with peanuts on top of the gas stove. Nijimbere stirs constantly.

“People ask me, why don’t I use the oven [to toast the peanuts]? No oven at home,” she says as she stirs. She scoops up a couple with the metal spoon, tastes them, and keeps stirring. Not ready yet.

In between stirring the peanuts, she adds a mixture of onions and mustard to a large stockpot, and as soon as the mustard hits the hot oil, the fragrance fills the air, melding with the aromas of chicken, eggplant, and rice pilao. A few minutes later she pours in chicken broth into the pot.

She turns to one of the young cooks who’s joined her in the narrow strip of kitchen space.

“We need to get the plantains started,” she says.

She turns around in the narrow kitchen to the opposite counter, looking for a bottle of oil.

“I just had it,” she says, shaking her head but with a smile. “New kitchen.” 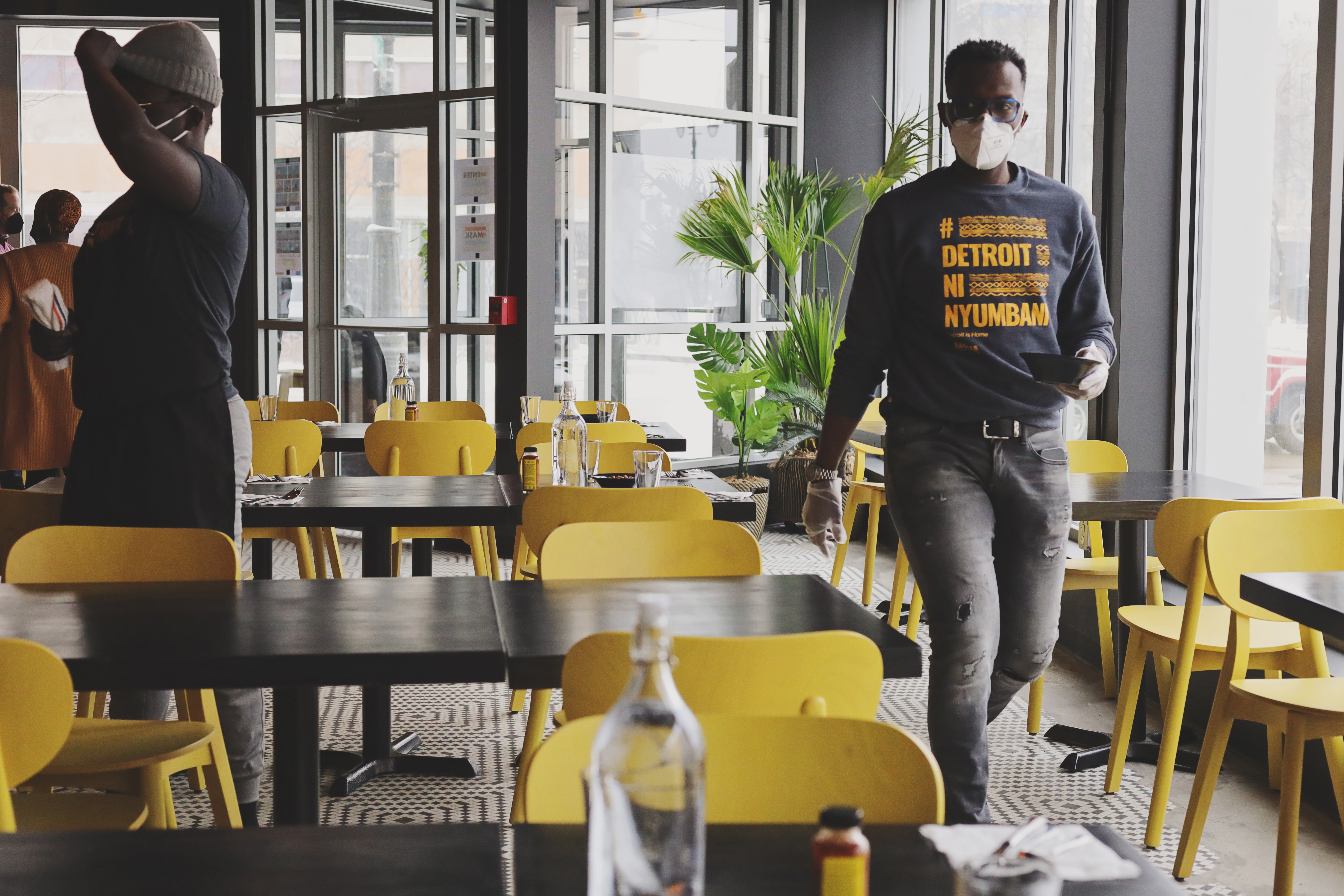 Indeed, the kitchen is new, the fryer, oven door, and other appliances still boasting a polished sheen. This is the first time she’s preparing for service in her own kitchen, in her own restaurant, not a shared space or someone else’s kitchen. Her husband, Hamissi Mamba, walks in and out of the kitchen, grabbing takeout containers, taste testing freshly fried chapati, and bringing small dark blue bowls of the salted peanuts to the tables to the dining room, a modern space with dark gray walls accented by red and yellow chairs.

At about 4 p.m. the first guests arrive, a table of three, who enthusiastically offer their congratulations. Mamba greets them at the door as one of the customers say to him, “It’s been a long time coming.”

It has been a long road for the couple, who fled Burundi a few years ago as Nijimbere, a human rights activist, was forced to flee. She arrived first in Detroit, followed by Mamba after finally securing a visa on the third try. He struggled to find a job at first, unable to speak English. He eventually found a job in a factory working seven days a week, but it wasn’t exactly a calling. Back in Burundi, he had a background in the restaurant business and helped his mother in the kitchen growing up. Nijimbere was a good cook. Just one year after arriving in the United States, he started dreaming of opening an East African restaurant serving food similar to what they had in Burundi.

Capital was a challenge because their situation was unique, Mamba says.

“Nobody would give us a loan. [As immigrants], we didn’t have a credit score.”

Fortunately they were able to find some resources in Detroit’s entrepreneurial ecosystem (in addition to winning the $50,000 Hatch Detroit prize in 2017) such as ProsperUS and the Economic Development Fund, securing loans to help build out the restaurant.

Then COVID-19 hit. They were planning to open in May 2020 but with the pandemic forcing restaurants to close, Baobab Fare wasn’t able to get some of the grants and other relief funds available to businesses because they hadn’t even opened their doors. Work on the restaurant came to a halt. They saw other restaurants shutting their doors for good.

“Even if we could open, everything was shutting down. So we were like, OK, let’s wait and see how things (in the restaurant industry are going)… We weren’t rushing to open, because of everything that was going on, because we were already having problems (with opening). We didn’t want to create more problems on top of (that). We were scared that we’d go bankrupt before we open,” Mamba says.

Then they were able to receive loan relief from Invest Detroit. With that and a temporary reprieve on the rent for their New Center space, they were able to keep moving forward and eventually open the doors once clearing the final inspections in February.

“Many people didn’t even believe that we could achieve this, reach this point, and open and realize this project,” he says. “I remember (when we were competing in) Hatch Detroit, people who were friends of ours (would tell us) you’re dreaming, you’re not going to get there. So now we’re at the point where we are hiring people. I remember when I came in this country. I couldn’t get a job. Now I’m hiring. It’s a big deal for me… I’m paying someone who has a family, who has kids… I’m contributing to somebody else’s life.”

And that’s what success looks like to him, not so much making a huge profit, but playing a significant role in his community, whether that’s acting as a bridge for others who see what they’ve achieved and are inspired to do the same or employ Detroiters to work at Baobab Fare (originally their vision was to hire people from Freedom House, the haven that helped them get started on their new lives in America, but the previous administration and the pandemic made that extremely challenging).

After “what me and Nadia went through in our lives to reach this point, we’ve succeeded already,” he says.

Dorothy Hernandez is a Metro Detroit-based journalist. She is Digital Editor for 101.9 WDET, creating and adapting content for digital platforms. She previously worked as managing editor of Model D and editorial director of Issue Media Group. She frequently writes about food at the intersection of culture and social justice and contributes to a variety of national and local publications.