When Jacqueline Perez isn’t taking engineering classes, she’s spending much of the week working part-time and plans to intern at General Motors during the summer. It’s enough for any 23-year-old to juggle, especially for a first-generation college student who’s long had ambitions of working at one of the Big Three and supporting her family.

There’s just one catch to that plan: On top of the studies and work, Perez makes up the second half of Antojitos Southwest, a food truck that is among a growing number of establishments specializing in the art of birria. In fact, she, along with co-owner (and mother) Gloria Contreras and her two brothers, are on a path to becoming one of the most popular taco trucks in Detroit right now.

The menu at Antojitos Southwest is simple. You can’t order a giant burrito, mariscos, burgers, or even a taco de carne asada or most of the many other staples common among Detroit food truck offerings. Instead, the family has stumbled upon a Mexican food phenomenon that in recent years has swept the nation.

Considered the official dish of the Mexican state of Jalisco, birria is a fiery stewed meat, usually involving goat, beef, lamb, or in some cases even rabbit. Just about every family in every pueblo in the highlands of Jalisco has their own recipe for the beloved, celebratory dish. And in Detroit, where the bulk of Mexicans and Chicanos have roots in Jalisco, birria has become nearly as commonplace as menudo on the menus of many restaurants.

A quick Google search reveals nearly two dozen restaurants and food trucks in Southwest Detroit alone that offer birria on their menus. That’s not including the many informal food businesses that sell the dish to hungry neighbors from their homes or in church kitchens for special events.

It wasn’t always so. For generations, longtime Mexican restaurants like Los Galanes, Armando’s, and Mexican Village (reportedly the oldest Mexican restaurant in the state of Michigan) opted for nearly identical menus that many liken to Tex-Mex, with cheese-laden entrees like chimichangas or enchiladas, fajitas, and of course, botana, paired with refried beans, “Spanish” rice, and chips and salsa. But as the Jalisciense population has continued to grow over the years, so too has birria’s presence in the local lexicon.

Up until a few years ago, it wasn’t exactly the craze that it has become both locally and across the United States, but rather a dish reserved for serving only during special occasions.

Over the past decade or so, birria, and specifically birria de res (beef) began gaining in popularity in cities like Los Angeles, where immigrants and Mexican Americans had easy access to Tijuana. That’s where quesabirria — birria meat and melted cheese in a tortilla that’s griddled with all of the juices and typically served with a side of consomé — reigned supreme.

As with any diaspora food, the quesabirria trend hopped the West Coast and has since penetrated the rest of the country, as well as social media, where TikTokers and bloggers rave about that cheese pull.

Bringing it all back home

Which brings us to Antojitos Southwest. One could say that the success of the food truck came by accident. Gloria Contreras was laid off in May 2020 from her job as a housekeeper for a hotel and was looking to earn an extra income. So she and her children began selling food from a stall outside their home just a few days a week. At first, the offerings included Mexican-style hot dogs, regular tacos, nachos, flautas, and other dishes typical of the family’s roots in Durango.

“We never intended to be a full business,” says Perez. “It was just going to be something to do during COVID. The thought process was, like, do something for COVID now, and then we’ll go back to work after quarantine [ends].”

Among the many specialties of the home-based enterprise: birria. Perez and Contreras say that before going into business for themselves, birria to them meant the traditional stew iteration, wherein the dish is served in a bowl with typical garnishments of cilantro and onion and a few tortillas ideal for scooping up the tender meat. The more portable quesabirria was something of a novelty to the family at first. That is, until Perez and one of her brothers recalled their experience trying quesabirrias in Los Angeles.

“I actually was the one who did them first,” says Perez. “I said, ‘Oh, we should sell them one of the days that we’re open, right?’”

That intuition paid off. Quickly, the family’s front yard food stand became inundated with customer demand, with fans hitting them up on Facebook and Instagram to place an order, sometimes waiting upwards of two hours just to get their fix. It became evident that the part-time informal food business wasn’t just a temporary COVID project — it was here to stay. 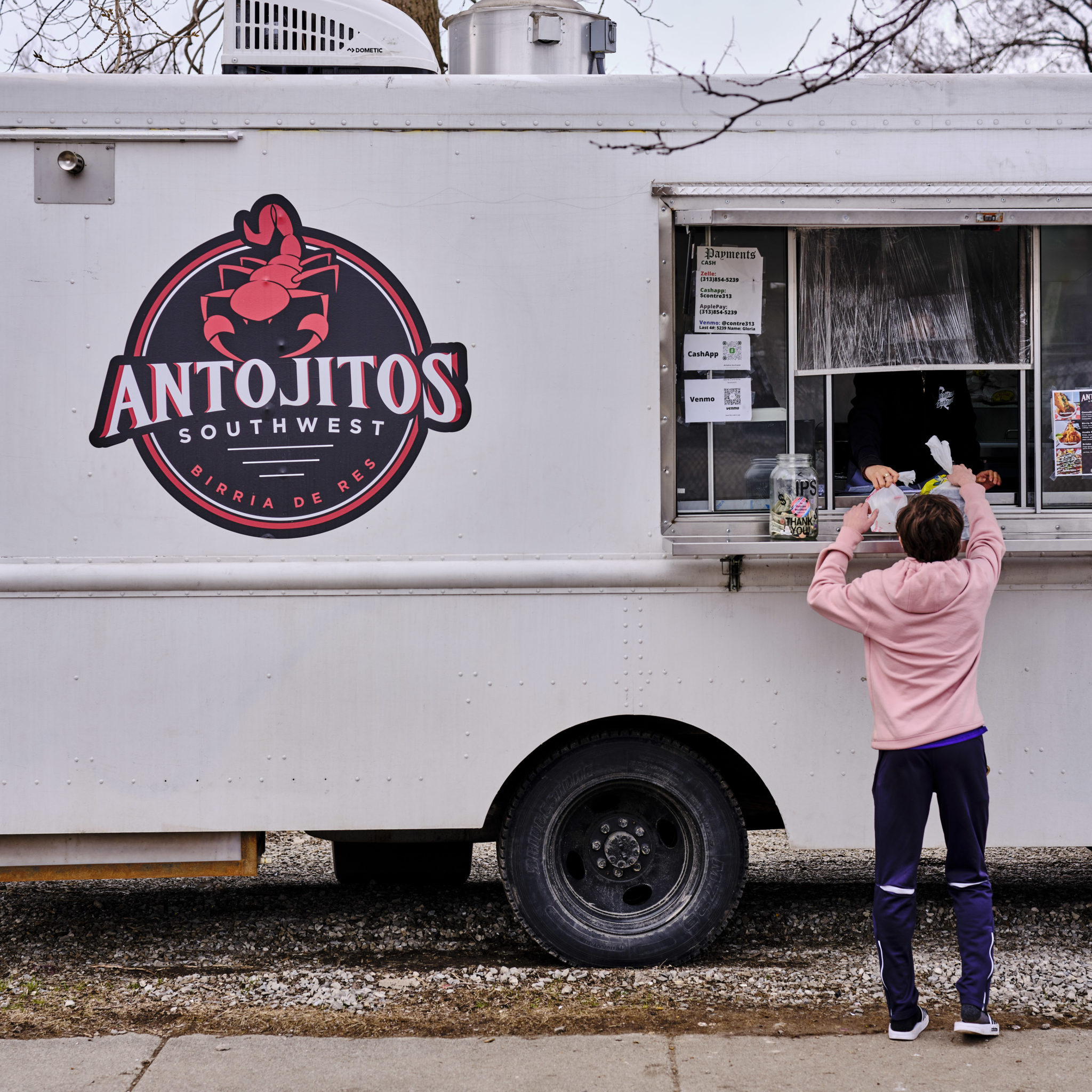 The family found and purchased a food truck online from out of state early last year, Perez says, before having it retrofitted in Detroit. In July, they set up shop in their new truck on an empty lot on the corner of Bagley and Wabash, just up the street from Honey Bee Market. The truck employs about half a dozen workers, as well as Perez’s two brothers, who can often be seen inside working the plancha.

Quesabirria is the main attraction, though fans can also procure another viral birria dish: ramen birria, which is, well, exactly what it sounds like — a cup of noodles filled with that savory consomé. The menu is rounded out by asada fries and glass bottles of pop.

Another Motor City nuance to Antojito’s birria: The meat is all halal, says Perez, a response to high demand from within the region’s huge Muslim community.

Perez says now the family is looking to the future and are thinking about opening a brick-and-mortar location. If they achieve this, Antojitos Southwest would likely be the city’s only dedicated, full-time birrieria, where the crimson dish is the star attraction, not just a supporting role.

What that means for Perez’s budding engineering career isn’t clear. She says she’s still pursuing her long-term goals, but with the way things have turned out since her family’s pandemic-induced foray into the food business, she knows that Antojitos Southwest will also continue to be part of her mix.

“I’m going to stick with school and then still be in charge of the business,” Perez says modestly.

We sure hope it all goes according to plan.

EDITOR’S NOTE: This article was originally published in Frame Stories, a digital food magazine led by Frame creative director Joe Vaughn and editorial director Mark Kurlyandchik. Frame’s mission is to cultivate and celebrate culinary talent. This piece was published in Tostada Magazine with permission through a collaborative storytelling effort.