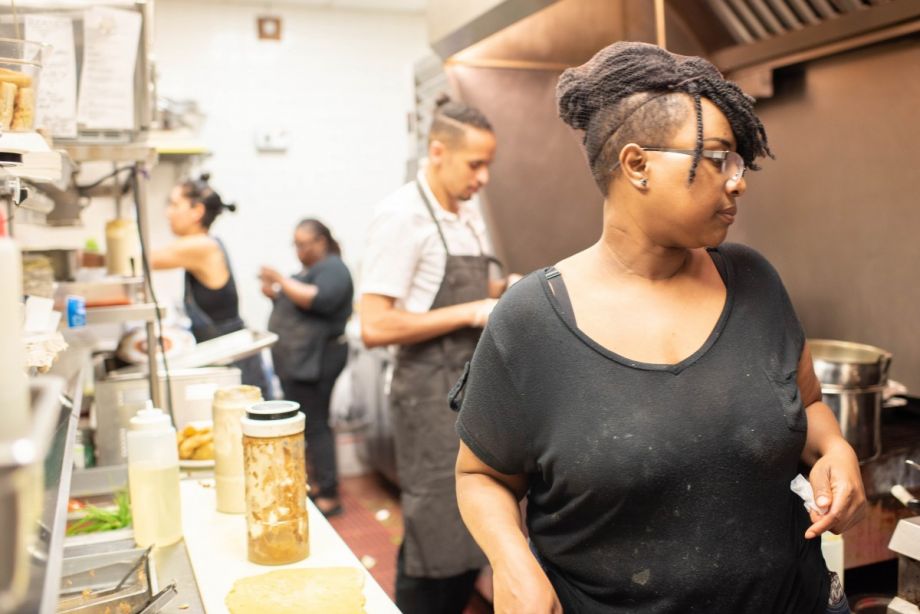 Last year, a coalition of community and food justice advocates, artists, chefs of color, and farmers from across the country came together in Detroit to envision a more just and equitable foodways.

For a few days during the Allied Media Conference in June 2018, this group took over the Cass Cafe in Midtown for a different kind of popup dining event, the Dream Cafe. They fed conference goers but more importantly used food as a means to combat cultural erasure with their heirloom recipes, empower black and indigenous farmers by sourcing their local ingredients, pay the front and back of house fair wages for its duration, and celebrated the many identities that make up our food ecosystem.

What was originally considered an experiment to see if this sort of food space was even possible, turned into an effort to create such a space on a permanent basis.

This week, that reality has come one step closer. One of the leading organizers in last year’s popup, FoodLab Detroit, has been awarded a significant grant to use for the planning of brick and mortar, full-time version of the Dream Cafe.

In an announcement published on Instagram on Thursday, FoodLab Detroit executive director Devita Davison said the Kresge Foundation provided a $35,000 planning grant to the nonprofit.

“Last year FoodLab Detroit & @alliedmedia collaborated on a pop-up unlike anything Detroit had ever seen — we took over the @casscafedetroit for 5 days, and during that time we allowed ourselves to envision a more equitable landscape for chefs, restaurateurs and food producers,” the announcement said.

Last year FoodLab Detroit & @alliedmedia collaborated on a pop-up unlike anything Detroit had ever seen — we took over the @casscafedetroit for 5 days, and during that time we allowed ourselves to envision a more equitable landscape for chefs, restaurateurs and food producers. . At @dreamcafedetroit, our 5-day pop-up, we showcased dozens of visiting chefs, farmers and FoodLab member businesses run by women, members of the LGBTQ community, and people of color. . We're thrilled to announce that today it was officially announced that FoodLab Detroit will receive $35,000 from the @thekresgefoundation to start the planning process to open a Dream Cafe in a Detroit neighborhood permanently! . We will announce more news about the Dream Cafe planning process; but for now we're throwing it back to moments of collaboration, creativity and joy at the Dream Cafe pop-up. #AMCTBT #grant #communitydevelopment #philanthropy nonprofit

Details about where exactly the Dream Cafe would be located in Detroit, the timing of its opening or what exactly the type of eatery it would be aren’t quite clear yet, though Davison told Tostada Magazine that the funding would help address those questions.

The opening could take place next year or in 2021, she added.

FoodLab will partner with Allied Media Projects and others to take on the project.

In the meantime, the organization has embarked on a series of working roundtables involving local restaurateurs, mostly consisting of women and people of color, to discuss and share best practices around some of the most pressing issues facing the restaurant scene in Detroit and beyond.

Called On the Table, these sessions have so far led with discussions around sexual harassment, mental health, and professionalism in the workplace, and how local restaurant owners and chefs are tackling these problems.

“I would call this the community engagement planning process for one of (our) biggest undertakings,” Davison told Tostada at a previous roundtable in April.

Interest in turning the popup into a long-term reality picked up following last year’s event.

But such undertakings are often led with hiccups, and the Dream Cafe was no exception.

A rotation of chefs from all over the country rotated shifts in the kitchen, some likened it to opening and closing 14 new restaurants in three days. Moments of confusion ensued between the front and back of the house at times, and some participants worked nonstop on little sleep. Similar to what workers deal with on a daily basis on a microscale.

It became clear that organizers would have to sit down with these lessons to see if replicating this on a longterm scale would be sustainable. Hence, the roundtables this year.

This latest effort around equity and sustainability in restaurants is taking shape in cities all over the country. Eater.com this year revamped its approach to its annual Young Guns awards to amplify these narratives by recognizing not just the talent that comes out of the kitchen, but the work being done by up-and-coming leaders are taking the charge to create a better culture in the industry.

For Davison, the new Dream Cafe is an opportunity to take those conversations being had and create a tangible way to invest in that future.

“It’s going to be the personification of all of that,” she says.

(Editor’s note: Tostada Magazine is also a sponsored project of AMP and is collaborating with FoodLab Detroit and The Work Department in the storytelling portion of On the Table)